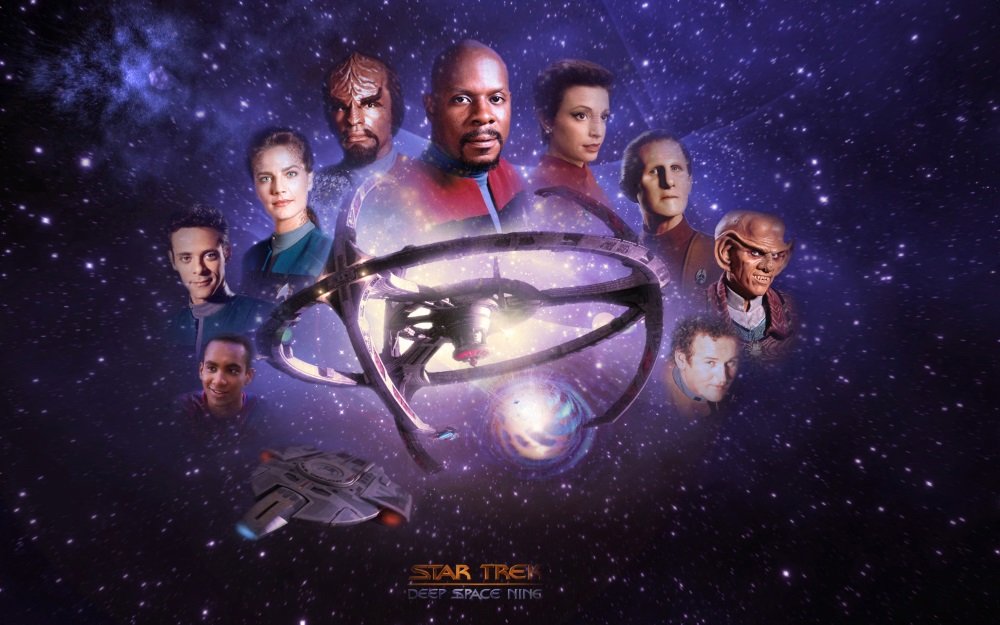 Star Trek: Deep Space Nine – Seasons 1-7 (1993-1999), the generation after Next, began its seven season tour of duty aboard a rust-bucket space station in 1993, while The Next Generation was still flying strong. In fact, Enterprise Captain Picard makes an appearance in tumultuous the two part opening, “Emissary,” to convince Commander Sisko (Avery Brooks) to remain on board as a Federation presence.

A deliberate attempt to toss a little grit in the idealism of the Star Trek universe, Deep Space Nine is a show of clash and conflict: the Federation is not exactly wanted by the newly liberated Bajorans of the planet below, but necessary to prevent the former occupying Cardassian Empire from moving back in when a stable wormhole is discovered in nearby space and immediately turns this galactic backwater into the most valuable piece of space in the quadrant. The station becomes a hub for merchants, traders, smugglers, con-men, and all manner of races passing through, and it’s no inter-species melting pot.

Though less exciting than the high flying adventures of the original series or The Next Generation, the first season has its strengths: the fascinating Constable Odo (Rene Auberjonois), a shape-shifter loner with no knowledge of his origins or his race; the conniving comic Quark (Armin Shimerman), the Ferengi barkeep and rogue entrepreneur; the recurring character Garak (Andy Robinson), the station’s lone Cardassian (rumored to be a spy and full of secrets hidden behind false smiles); and the volatile politics and religious tensions that surround the planet. You can see the show struggling with its identity, wanting a rougher and grittier feel, never quite pulling it off but creating just enough turmoil to make it interesting.

The second and third seasons dig into the internal politics of both the Bajoran government and religious order dominate the opening of the season, with guest stars Frank Langella and Louise Fletcher, but the show heats up with the introduction of “The Maquis,” a guerrilla group of human and Bajoran soldiers stirring up a war in Cardassian space (with guest star Bernie Casey), and “The Jem’Hadar,” the savage foot-soldiers of the Dominion on the other side of the wormhole. Relations between the Federation and the Dominion heat up and the Cardassians form an alliance with the Romulans in the third season.

But it’s the fourth season where the show really finds its space legs and it announced its leaner and meaner approach by the serious new look of Sisko. He shaved his head, giving him back his “Hawk”-like visage of Spenser for Hire, and brought a determination to match, and just in time. The fragile peace in the quadrant, already jittery as the threat of the Dominion shapeshifters and their shock-troop army of Jem’Hadar warriors, puts everyone on guard for an invasion, is shattered from within in the two-part opener as the Klingons take it upon themselves to invade the Cardassian Empire and Deep Space Nine is in the awkward position of standing against their allies to save the scheming Cardassians. But they have help: Worf (Michael Dorn) joins the cast as a temporary liaison turned permanent station tactical officer, and yet another volatile personality stirred into the melting pot of DS9.

Nothing invigorates a series like conflict and from season four, the convergence of the Cardassians, the Klingons, and the Romulans on Bajoran space and the threat of the Dominion on the other side of the wormhole (with their shapeshifting soldiers) creates unexpected alliances and power shifts. At one point the Deep Space Nine station is under Dominion rule and Cardassian occupation while Sisko and his crew fight from a warship, Worf serves aboard a Klingon warship, and Odo anchors a resistance cell on the Station as a war rages through an entire season. The fact is, Deep Space Nine gets more interesting and compelling with each succeeding year and it signed off at its peak: the final season doesn’t lack for ambition and, apart from a TV budget that starves the visual sweep, it succeeds in meeting it with only minor caveats. The two-part series finale is a fitting end to a series that became an epic production and a final season that turned into a veritable serial with an enormous cast of players. The sacrifice, closure, and rebirth of the final show is so satisfying you’ll want it to go on. Cherish it. It’s still the finest conclusion to a Star Trek series to date.

The supporting crew includes Nana Visitor as the Bajoran Major Kira, Colm Meaney as Chief O’Brien (moving over from The Next Generation), Terry Farrell as Lt. Commander Jadzia Dax, and Alexander Siddig as Doctor Bashir, plus Cirroc Lofton as Sisko’s son Jake Sisko,

There are two call-backs to the original show that Trek fans will appreciate above and beyond their place in the DS9 universe: the Season Two episode “Blood Oath,” with John Colicos, Michael Ansara and William Campbell reprising their roles from the original series as Klingon officers Kor, Kang, and Koloth, now aging old soldiers who reunite for a decades old mission of vengeance, and the fifth-season episode “Trials and Tribble-ations,” a delightful time travel comedy that, with the magic of modern special effects and a dead-on eye for bright sixties art direction and costume design, lands the DS9 crew in the famous Star Trek episode “The Trouble With Tribbles,” where they interact with Kirk, Spock, and the old crew. Delicious!