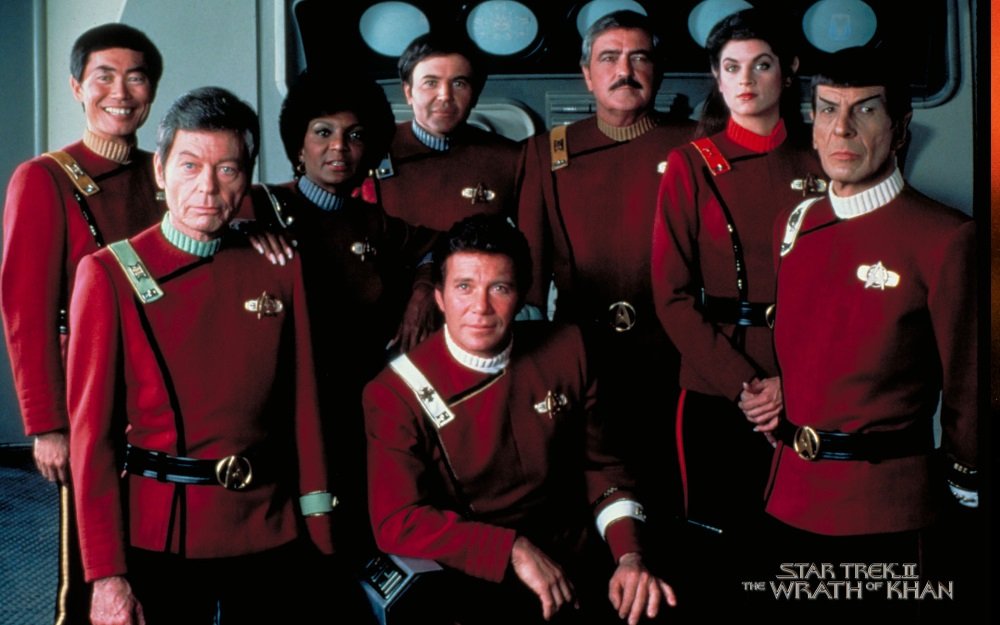 Star Trek II: The Wrath of Khan (1982), still the best of the big screen Star Trek movies, features Ricardo Montalban reprising his role from the original series TV episode “The Space Seed,” but now the genetically perfect human has become a man obsessed with revenge against Captain Kirk. This a veritable swashbuckler of a sci-fi adventure, as different as could be from the stately, stodgy Star Trek: The Motion Picture (1979).

Director Nicholas Meyer brings a panache to the production and James Horner’s brassy score is jaunty and heroic, one of his best ever. Best of all, William Shatner, Leonard Nimoy, and DeForest Kelley seem to have both gotten back in touch with Kirk, Spock and McCoy (respectively) and those iconic relationships all over again—deftly flirting with the changes of age and easily slipping into familiar clashes of logic versus emotion—while Kirk springs into action with the wiles of an old fox teaching the young cubs the real rules of the wild. And of course there is the still impressive sight of wild-maned and bare-chested Montalban looking more buff and cut in his sixties than most of the young stars on screen.

Star Trek III: The Search for Spock (1984) – Picking up directly from The Wrath of Kahn, this episode finds Spock dead, McCoy slowly going mad, and the Enterprise about to be mothballed. What better invitation for the crew to go renegade, hijack the old girl, and race the Klingons back to the Genesis planet? Leonard Nimoy made his directorial debut with this feature and he’s still getting his space legs, but the Enterprise crew are old hands at this by now and they hold the film together.

Star Trek IV: The Voyage Home (1986) – The crew of the Enterprise navigate a Klingon Bird of Prey back in time to save the whales and, in the process, save mankind. The most lighthearted adventure of the series, this is the favorite Trek film of non-Trekkers. Spock learns to pepper his speech with “colorful metaphors,” Russian-accented Chekov (Walter Koenig) asks directions for the “nuclear wessles” for Cold War cut-ups, and the crew in general juggles comic culture shock on their mission in 20th century San Francisco.

Star Trek V: The Final Frontier (1989) – “What does God need with a starship?” Kirk, Spock, McCoy and friends saddle up once again in the most maligned film in the series, with sloppy direction by William Shatner himself. This time they head out on a veritable crusade to find the Almighty in the center of the Universe and it nearly buckles under its pretensions, yet I have a fondness for this chapter. Kirk climbs Yosemite’s towers, Uhura (Nichelle Nichols) does the hoochie-koochie for a band of desert rats, and Spock sings “Row Row Row Your Boat.” And where else do you hear a Vulcan laugh?

Star Trek VI: The Undiscovered Country (1991) – “The Vulcans have a proverb: Only Nixon can go to China.” The last cinematic tour of duty for the original bridge crew of the Starship Enterprise reunites the cast with director Nicholas Meyer (The Wrath of Kahn) and sends them where no man has gone before: into the Klingon empire to broker a peace treaty. So Admiral Kirk, the Klingons’ greatest human nemesis, is framed for murder and sent to the worst prison planet in the galaxy, and Spock leads the fight to uncover the conspiracy and save the peace. Christopher Plummer is a Shakespeare-quoting Klingon war hero (who likes to quote the Bard in the original Klingon), David Warner is a Klingon ambassador whose efforts threaten generations of antagonism, and Christian Slater and Next Generation co-star Michael Dorn have cameo-like appearances.

Star Trek: Generations (1994) – Kirk formally hands over the bridge to the next generation in his final Star Trek feature, a kind of passage that turns into tragedy when a disaster sweeps Kirk into the great unknown. Seven decades later, Captain Picard (Patrick Stewart) and his Next Generation crew are on mission to rescue a physicist (Malcolm McDowell) with a plan that would qualify him for the title “mad genius” and Picard falls into a rift in space and time threatens to tear apart a planet, but also unites him with Kirk. Which means that not one but two Enterprise Captains save the day. Jonathan Frakes, Brent Spiner, Micheal Dorn, LeVar Burton, Marina Sirtis, and Gates McFadden make up Picard’s crew.

Star Trek: First Contact (1996), the first Star Trek feature without any of the original crew, sends the Enterprise to take on the Borg, and this time Captain Jean-Luc Picard (Patrick Stewart) makes it personal! The crew follows the Borg back in time, where the Borg Queen (Alice Krige) plots to change the course of human history by preventing the pioneering warp drive experiment by Zefram Cochrane (James Cromwell). Directed by costar Jonathan Frakes (who also plays Picard’s First Officer Ryker), it has a distinctly small screen flavor, like an ambitious telefilm with a runaway budget and spectacular special effects. Alfre Woodard guest stars and Trek TV actors Robert Picardo and Dwight Schultz make jokey cameos for the fans.

Star Trek: Insurrection (1998) – The Next Generation crew spring into action to defend a peaceful planet that turns out to be the intergalactic answer to the fountain of youth, and the bad guys (led by F. Murray Abraham under a silly-putty mask) are willing to commit genocide to plunder its properties. Guest stars Donna Murphy and Anthony Zerbe join the crew for this big screen voyage.

Patrick Stewart’s Captain Picard comes face to face with himself in the tenth Star Trek feature. Star Trek: Nemesis (2002) features not one but two doubles of favorite Enterprise characters: the proto-Data B4, and a Picard clone that looks like young Lex Luthor and is similarly bent on a plot of domination. His motivation is fuzzy at best and for all the color and effects, this plays like a souped-up episode. Ron Perlman and Dina Meyer costar with the familiar faces of the Enterprise crew and Brent Spiner’s Data sings Irving Berlin.