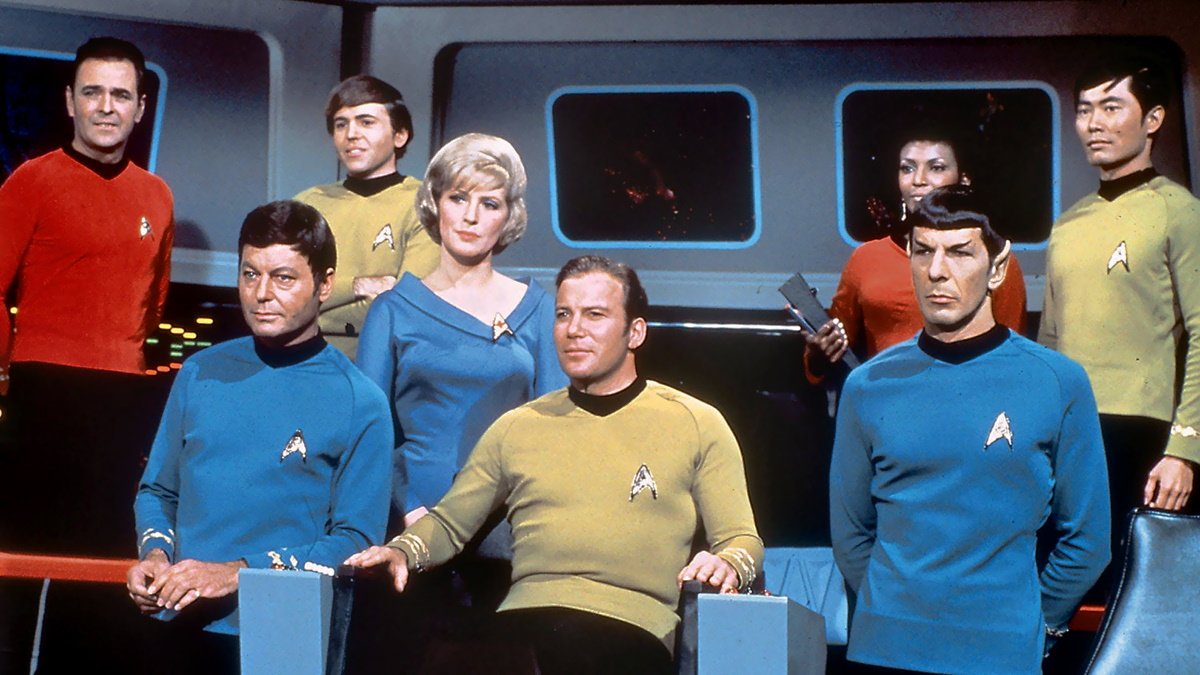 It’s been over fifty years since Star Trek (1966-1969) launched the original voyages of the Starship Enterprise and an entire universe has grown around it, with sequels and prequels, feature films and spin-off shows, alternate histories and character revivals and reinventions.

Given so many iterations, it may be hard for younger viewers to understand just what a cultural lodestone the original series was in its day, and in the extended life reruns provided, giving at least a couple of generations a chance to explore strange new worlds, to seek out new life and new civilizations, to boldly go where no man has gone before.

Star Trek: The Original Series, as it has been renamed in light of the subsequent series, launched under the command of the manly yet amiable Captain James T. Kirk (an often histrionic William Shatner). His bridge crew consists of the unemotionally logical yet unfailingly loyal Vulcan science officer Mr. Spock (a deadpan Leonard Nimoy, with elf ears and the Vulcan equivalent of a page boy cut), homespun Dr. McCoy (DeForest Kelley), a country doctor in space with an emotional hair trigger and a penchant for needling Spock into debates about logic and emotion, Chief Engineer Scotty (James Doohan), navigator Lt. Sulu (George Takei), communications officer Lt. Uhura (Nichelle Nichols). Mr. Chekov (Walter Koenig) joined the team in season two.

Creator Gene Roddenberry reportedly pitched the show as “Wagon Train to the Stars,” a western with starships instead of horses, but just as Rod Serling did before him in The Twilight Zone, he used the cover of science fiction to address contemporary cultural and social issues. He also commissioned scripts from esteemed science fiction authors like Norman Spinrad, Harlan Ellison, Theodore Sturgeon, Robert Bloch, and Jerome Bixby, secured Fredric Brown’s landmark story “Arena,” and launched the writing career of David Gerrold. This was a science fiction series that took science fiction seriously while presenting the most idealistic portrait of the potential of mankind ever broadcast. It may have inspired more people to embrace to potential of science than any other TV show.

And, of course, it gave us communicators, transporters, tricorders, way cool phasers, and perhaps the most iconic spaceship in popular culture: the Starship Enterprise.

The series opens with Man Trap, a classic Trek story of alien encounters and interstellar morality with a cast of characters in the early stages of narrative evolution. As the actors settled into the characters and the writers settled into the universe, the series developed into the iconic show still beloved by so many, with such season highlights as Balance of Terror (a battle of wits and strategy with the Romulans, in their first series appearance), Shore Leave (an amusement park of the mind, scripted by Theodore Sturgeon), Arena (Kirk versus the lizard man in a macho battle to the death, adapted from the famous Fredric Brown short story), Devil in the Dark (one of the episodes that shows Roddenberry’s desire to twist stereotypes and create unexpected, peaceful resolutions to alien clashes), and the award-winning City on the Edge of Forever, scripted by Harlan Ellison.

Other favorites include Mudd’s Women, which introduced interstellar conman Harry Mudd (played by Roger C. Carmel and still one of the favorite guest characters), Miri (“Bang, bang, on the head!”), The Corbomite Manuever (a deadly stand-off with an alien ship), and Space Seed (with Ricardo Montalban as a genetically engineered superman; the episode inspired Star Trek II: The Wrath of Khan).

The show was a ratings disappointment but NBC renewed it for a second season (adding the youthful Chekov to provide the bridge with a heartthrob) and opened it with the classic Amok Time, where Spock goes into… well, he goes into heat and goes all gladiator with Kirk in his sex-frenzied blood-lust. Highlights include Mirror Mirror (a transporter accident sends an away team into an alternate universe with a fascist Federation), Journey to Babel (Mark Lenard’s first appearance as Sarek, Spock’s estranged father), and the fan-favorite The Trouble With Tribbles. (The episode is brilliantly revisited in Deep Space Nine in the episode Trials and Tribble-ations, which sends the contemporary characters back in time and uses digital effects to let the actors interact with the original cast.)

Norman Spinrad scripts The Doomsday Machine, which pits the Enterprise against a planet-killing machine from another galaxy, Robert Bloch sends the series into horror with his episodes Wolf in the Fold and Catspaw, and A Piece of the Action sends the Enterprise to a planet that runs like a 1930s gangster movie, complete with a tommy guns and a mob war.

The show was saved from cancellation by a massive letter-writing campaign from fans of the show and it returned for a third and final season, albeit with a lower per-episode budget. It’s considered the weakest of the three season but it includes the classic episodes The Enterprise Incident, where Kirk’s rash detour into Romulan territory and his struggle with Spock over command masks a deeper motive, Day of the Dove, which pits them in hand-to-hand conflict with a Klingon warship led by Kang (Michael Ansara, who reprises the role in an episode of Star Trek: Deep Space Nine), Plato’s Stepchildren, which features what has been noted as the first interracial kiss on American network television, and The Tholian Web, where Spock takes the helm while Kirk is lost in the inter-dimensional space.

Frank Gorshin, his face painted white and black, declares war on his mirror image in Let That Be Your Last Battlefield, McCoy falls in love in For The World Is Hollow And I Have Touched The Sky, Yvonne Craig (aka Batgirl) dances the hoochie koo in an insane asylum in Whom the Gods Destroy, Spock plays the lute for a band of galactic hippies in The Way to Eden, and in the series finale, Turnabout Intruder, Kirk’s body is taken over by a madwoman and he winds up in hers, giving that old ham Shatner an opportunity get in touch with his feminine side.

The fact is, this show became so iconic despite the fact it ran a mere three seasons that most episodes have some tug of the fans for one reason or another.

In 2006, Paramount rereleased the show in a remastered edition. The show was shot on 35mm film so the restoration team was able to restore the image from original elements and bring out previously unseen clarity, but the special effects were all created on video, leaving the team with low-resolution elements. To match the crisp imagery of the dramatic scenes, a team recreated the special effects with digital technology designed with a retro-look. They scanned the original Enterprise model to create the digital replacement, so the new ship is clean and sleekly presented without additional detail or clutter, and recreated background mattes to honor the style of the original imagery. In a side-by-side comparison, the differences are startling, but in the context of the shows the new footage is well integrated into the existing footage, matching the style and sixties color scheme while giving the ship a more substantial, solid feel. Sound effects were also remastered. These episodes have replaced the previous syndicated editions on all streaming services.

They’ve all been released on Blu-ray and DVD. The Blu-ray editions include the remastered editions with new special effects and additional supplements.

Season One features various featurettes, interviews, galleries of stills and art and other supplements from the previous DVD release, plus new “Starfleet Access” mode with picture-in-picture interviews pop-up trivia for five

Season Two supplements include two “Tribbles” sequels (“More Tribbles, More Troubles” from the animated series and the “Deep Space Nine” episode “Trials And Tribble-ations”) and the new featurette “Billy Blackburn’s Treasure Chest” (think of it as a “Memories of a Star Trek Extra and Spear Carrier”) in addition to all the supplements from the previous DVD release.

Season Three presents the home video debut of the alternative version of “Where No Man Has Gone Before,” the original, unedited pilot (or rather the second pilot) featuring different opening narration, theme song and credits sequence, mastered from a recently discovered 35mm print in the Paramount vaults. There are also new featurettes recorded at Comic-Con 2009 (including a lightweight tour of “Trek” quasi-celebs and fans conducted by writer David Gerrold) along with featurettes, interviews and other extras from previous “Season Three” releases, including two versions of the original pilot episode “The Cage” (with Jeffrey Hunter as Captain Pike and Majel Barrett as his Number One): the reconstructed version with B&W work-print footage (with an introduction and afterward by Gene Roddenberry) that was originally released to video in 1986, and the complete, restored, full color version broadcast on TV in 1988.