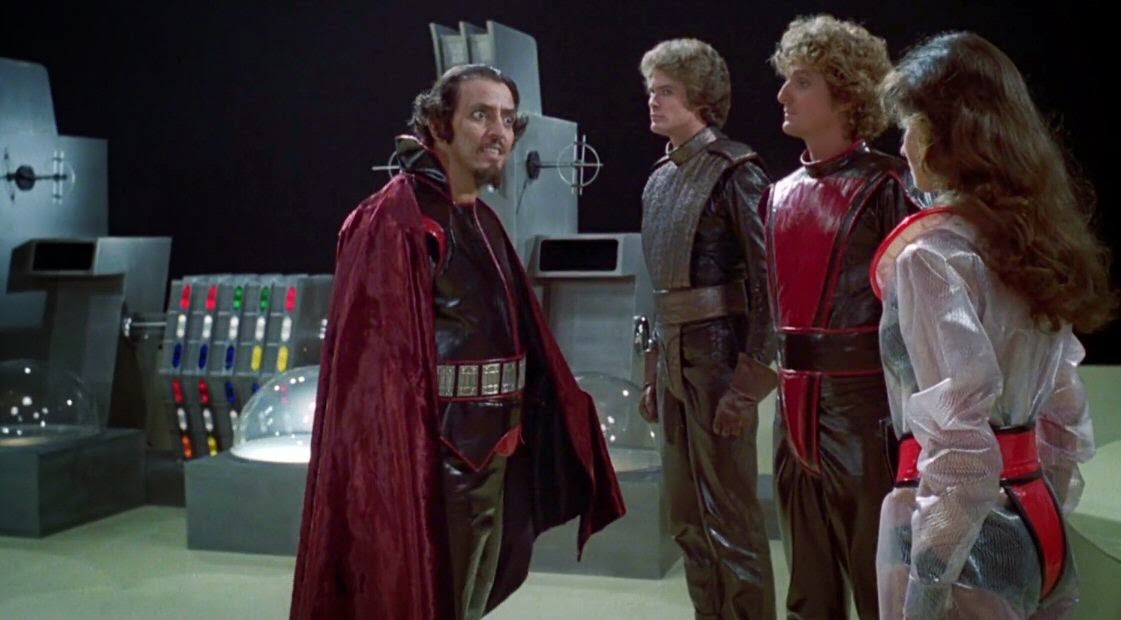 The shamelessly and fabulously derivative Italian space opera Starcrash (1979) is both the most ridiculous and the most irresistible of all the Star Wars knock-offs of the late seventies and eighties. Caroline Munro spends much of the film in a black latex bikini as the great outlaw starship pilot Stella Star, who is arrested by space speed cops, sentenced to life in a slave planet, masterminds an escape and is pardoned by the Emperor (Christopher Plummer) in exchange for traveling to the Haunted Star to find the Phantom Planet of the rebellious Count Zarth Arn (a chubby Joe Spinell). And that’s just the first few minutes.

The introductory shots echo the opening of Star Wars, with the camera caressing cut-rate space ship miniatures against a galactic backdrop lit up like Christmas tree lights. There’s an android sidekick with a Texan accent (not a Black Hole reference—that came out a year later—merely a lucky coincidence), alien civilizations (“Look! Amazons on horseback!”), holographic messages, hyperspace travel and a light saber, not to mention stop-motion robot guards animated with more love than talent and a Death Star substitute with five flaps that look like a hand and fold down into a fist to fire. But the set designs, costumes and psychedelic color are right out of sixties Italian genre cinema. Marjoe Gortner is prissy and unnaturally cheerful as her alien navigator, a mix of Luke Skywalker, Obi-wan Kenobi and Mr. Spock, and David Hasselhoff makes his entrance in a gold mask that looks borrowed from Zardoz, but Plummer brings dignity and gravitas to his part (even when booming the line “Imperial Battleship, stop the flow of time!”) and John Barry contributes a romantic-tinged score, less epic and adventurous than Williams but quite lovely.

For all the clumsy camp, director Luigi Cozzi (billed here as Lewis Coates) makes this a triumph of low-budget spectacle over narrative coherence or screenwriting wit. The tone-deaf delivery off the post-synched soundtrack (British Munro is dubbed by some anonymous American) only reminds us how much the mundane script provides a descriptive video audio track built right into the dialogue. Though part of the “Roger Corman’s Cult Classics” collection. Roger Corman had no hand in the production—it was simply a New World pick-up—which might explain how such tone-deaf dialogue and performances got through the film, but he certainly recognized an exploitable product when he saw it.

Shout! Factory gave the film its DVD and Blu-ray debut. The depth of its tiny yet passionate fan base is exemplified in the contributions of Stephen Romano, a screenwriter and fan who introduces himself as “the world’s foremost authority on the making of this film” and claims this film as “a great work of art” in his essay in the accompanying booklet. That’s a little overstating the issue. Okay, a lot overstating it, and he pours out even more in not one but two separate commentary tracks. “This is an Italian film produced by French people, starring British people, and inspired by every American trend going on in film around that time,” opens the first track. which rambles on for almost twenty minutes of preliminary (and fairly obvious) notes on the history of science fiction and the influence of Star Wars and Italian genre films before he even gets to the film at hand. The second track is equally full of diversions. His affection is endearing but I got tired waiting for him to actually talk about the film and its production.

More interesting is “Luigi of the Stars: The Making of Starcrash,” a very entertaining 42-minute interview featurette with Luigi Cozzi, who gushes over his love of sci-fi (he still owns the first issue of “Famous Monsters of Filmland” which features one of his letters) and describes the process of how he got the assignment to whip out a Star Wars knock-off and wrote a script without actually seeing the movie (which hadn’t opened yet in Italy, so he read the novelization). “I tried to do a Ray Harryhausen movie,” he confesses. “I tried to do Sinbad on Mars.” His philosophy may be best exemplified in one offhand comment about a particular scene: “A little stupid maybe but beautiful.”

“The Making of the Special Effects of Starcrash” is a film by Armando Valcauda, featuring clips of his animation and effects work past and production stills from Starcrash, with subtitles providing the commentary (apparently written by Valcauda himself, in first person broken English). Also includes some unused stop-motion effects, including a dinosaur that Stella shoots with a laser (it looks like he used primitive video effects to matte them into live action scenes to give us a sense of what was intended).

There’s also a generous 73-minute “Interview with Caroline Munro,” who discusses her entire career, and the 17 deleted/alternate scenes, all with helpful introductory comments putting them in context. Don’t miss the alternate end credits with a disco version of the score. With lyrics! Also includes featurettes on the John Barry score (with composer and producer Mars of Deadhouse Music) and the special effects, a reel of behind-the-scenes footage with commentary by Romano and galleries of stills artwork (much of it apparently from Romano’s personal collection) among the supplements.