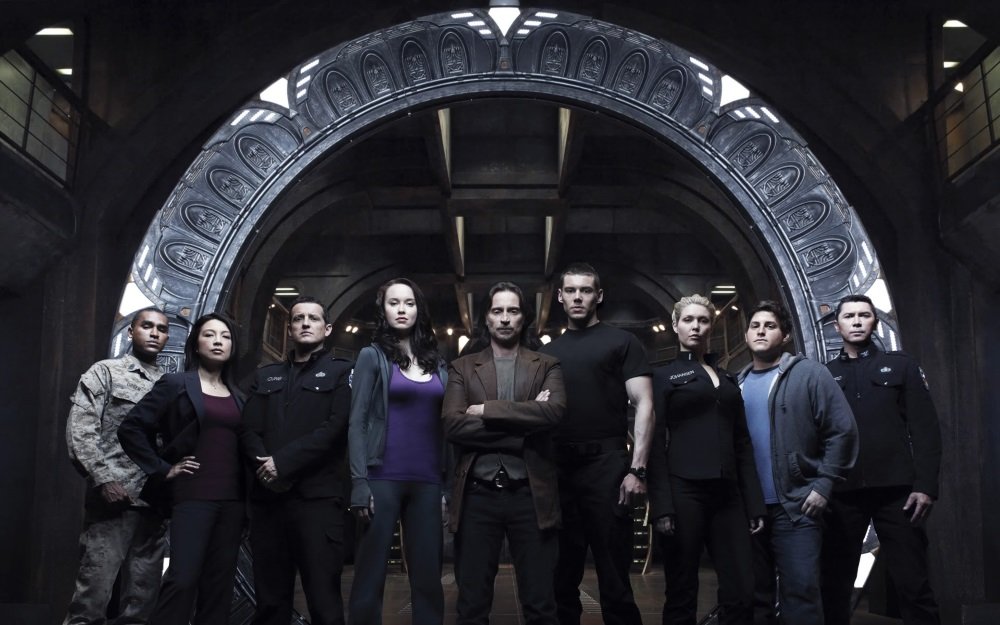 Stargate Universe: Seasons 1-2 (2009-2011) – For a time, the Stargate franchise was the Star Trek universe of the SyFy channel. I confess I was never a fan of the original Stargate SG-1 series (which began on Showtime and then moved to SyFy) and never got past the first episodes of Stargate: Atlantis but Stargate Universe (or as it is listed on IMDb: SGU Stargate Universe) intrigued me. It was developed in the wake of the channel’s Battlestar Galactica revival / reinvention and that grittiness and dramatic darkness was incorporated into the fabric of this series.

The pilot episode opens with a group of officers, soldiers, scientists, and civilians tumbling into a dark, alien room. They’ve taken a blind leap through an ancient Stargate (which, if you’ve never seen the show or the original film, is basically an ancient alien teleportation system), accessing the previously inaccessible “ninth chevron” and landing in what turns out to be on an ancient spaceship—”Destiny,” according the English translation of the alien designation—flying faster than light away from the Milky Way, currently 7 billion light years from Earth (give or take a few million). The way back has been destroyed by an enemy attack that destroyed the base (and quite possibly the entire planet) and there isn’t enough energy on the ship to power a Stargate jump back to Earth even if they had the codes, so the best they can do is learn all they can about this automated ship and its mission. To take the Star Trek comparison to its logical conclusion, that would make Stargate Universe the equivalent of Star Trek: Voyager, only this is not the civil atmosphere of a Star Trek series, or even the necessary collaboration of Galactica.

Colonel Everett Young (Justin Louis) puts the mission under military command but half these people aren’t military. Dr. Nicholas Rush (Robert Carlyle), the scientific genius leading the investigation, is obsessive and arrogant, working from his own agenda and too self-absorbed to bother communicating his discoveries or his worries to anyone else. Neither the military nor the civilians trust him but they need him. Air is leaking from the ship and CO2 building up from their presence. They need food, water, energy, and information. “It’s essentially on auto-pilot,” explains Rush. “We’re just along for the ride.”

There are power struggles for command. Only civilian Eli Wallace (David Blue), a mathematics genius and all-around laid back guy, is trusted by everyone, and his openness and optimism is sometimes all that gives them hope. Drawing on the scientific magic of the Stargate universe, they have one limited lifeline back to Earth: the communications stones, which can send a consciousness across the galaxy and into another body for a period of time. And even that just creates more tensions as an officer back home (Lou Diamond Phillips) tries to take charge of the mission remotely without fully understanding the situation.

The series combines hardcore science fiction atmosphere of alien technology and mystery with a volatile atmosphere of human anxiety and desperation in a situation from which they see no way home and every day is another crisis. They are “the wrong people in the wrong place,” tossed into a mission that weren’t prepared for with no replacements on the way for anyone lost in a crisis. And the stakes become all too apparent when a murder investigation in the middle of the first season reveals rifts to deep they threaten to tear apart the leadership.

The change in style and tone from previous incarnations of the franchise became the show’s strength but also its biggest issue. Fans of the first two shows didn’t like the grittier, darker approach while fans of Galactica, SyFy’s award-winning signature show, simply didn’t tune in. I thought it was the best old-school science fiction on TV during its brief odyssey in 2009-2011 but it was cancelled after struggling for viewers over two seasons, before the producers had a chance to bring closure to the show. At least it ends on a satisfying note of mystery and potential. Also stars Brian J. Smith, Elyse Levesque, Alaina Huffman, Jamil Walker Smith, and Ming-Na Wen.