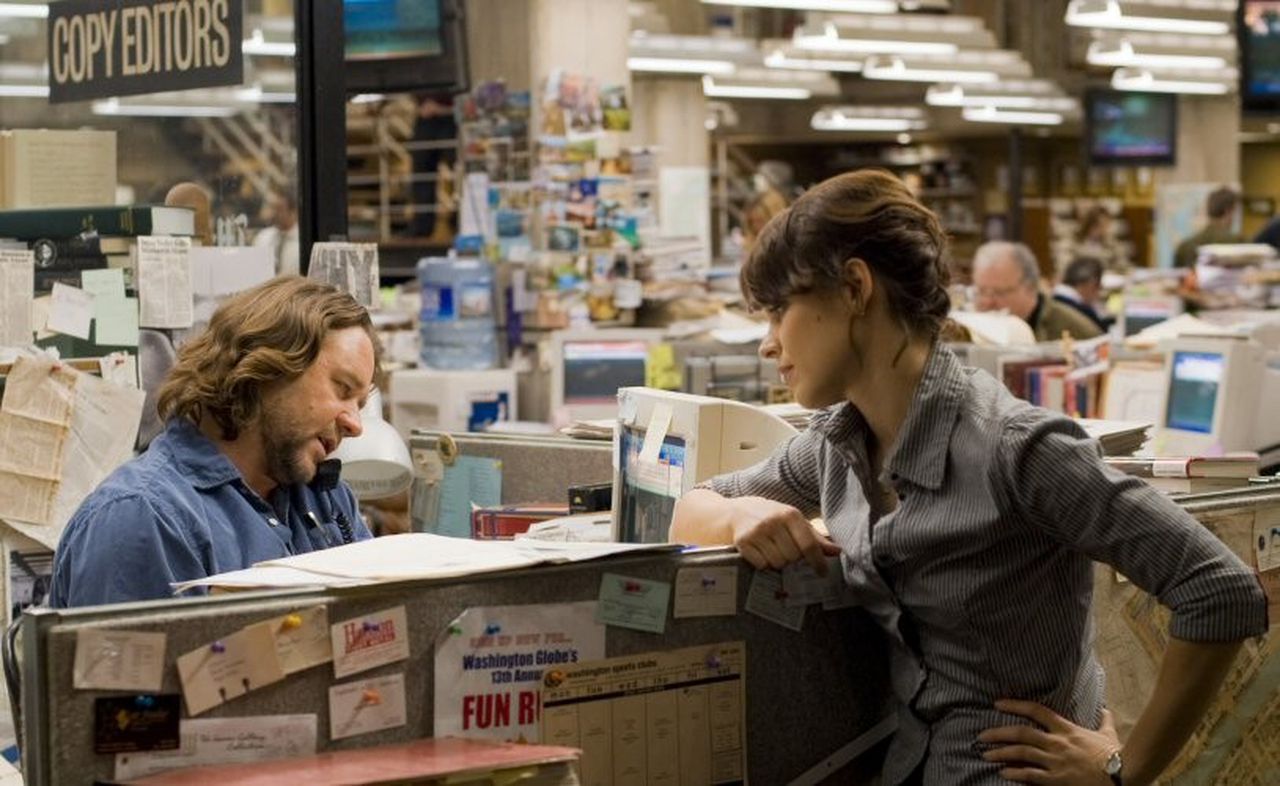 Politics, journalism, and murder swirl through State of Play (2009), the American adaptation of the sharp, award-winning British mini-series.

Cal McAffrey (Russell Crowe) is the old school reporter in rapidly evolving newsroom, still using an old IBM computer with the blinking cursor while everyone else is hooked up to the web. Della Frye (Rachel McAdams) is part of the new breed, a hungry young political blogger who latches onto the murder of a young woman working for Stephen Collins (Ben Affleck), an ambitious congressman heading up hearings surrounding war profiteering and a Blackwater-type organization. Collins is also an old college buddy of McAffey.

The plot is the same as the original British show but the culture of old style newspaper reporting butting up against the new culture of internet journalism and the bottom line of shrinking profits and corporate demands makes for a lively and very current backdrop. Crowe basically stands in for the clash, a 20th century reporter in a 21st century newsroom, and McAdams stands in for the enemy, a political blogger who wants nothing more than to be taken seriously as a reporter.

Jason Bateman stands out in a terrific cast as a sleazy customer who does dirty work for the lobbyists and corporations under scrutiny and Helen Mirren, Robin Wright Penn, Viola Davis, and Jeff Daniels costar.

Leaves Peacock at the end of August. Add to My List on Peacock

Also on Blu-ray and DVD and on SVOD through Amazon Video, iTunes, GooglePlay, Fandango, Vudu and/or other services. Availability may vary by service.
State of Play [Blu-ray]
State of Play [DVD]

“The Making of State of Play” is a better than average featurette with some interesting production insights between the self-congratulatory interviews and there are a couple of deleted scenes. No commentary, but exclusive to Blu-ray is a picture-in-picture audio-video track. While I like the idea of a series of featurettes and interviews cued to the narrative, it only works when it plays throughout the film. This one is fine when it’s on (a walking tour of the newsroom set, actors discussing their characters as they appear onscreen) but it goes into hibernation for long periods of time, which gets frustrating – on or off, pick one. There’s also an interactive guide to locations.