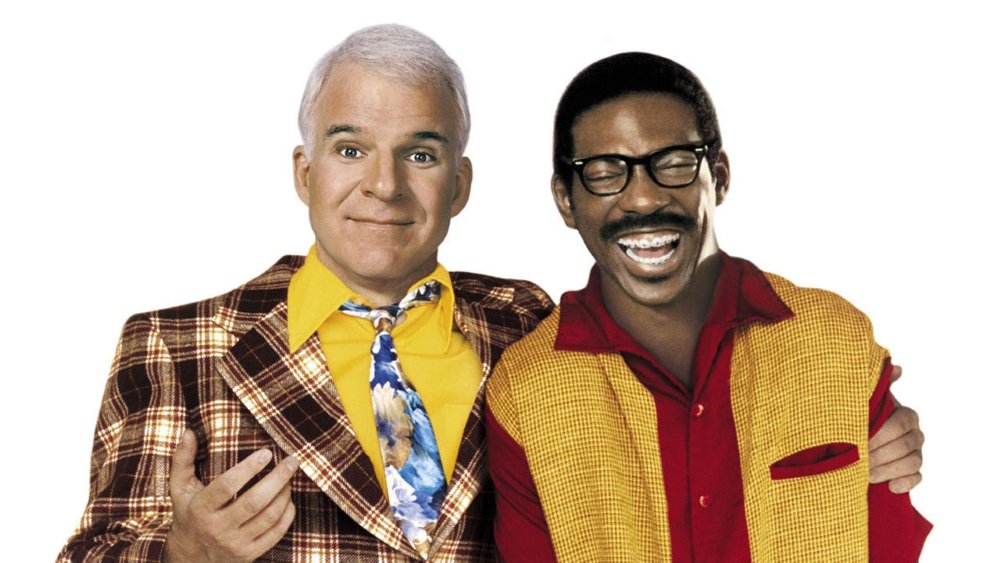 Bowfinger (1999), Steve Martin’s tribute to shoestring filmmaking and big-screen dreams, is a loving lampoon that gamely straddles the chasm between cynical con-artistry and benign innocence.

Martin wrote the film and stars as commercial director and would-be filmmaker Bobbie Bowfinger, a Hollywood dreamer with more chutzpah than talent. When he stumbles upon the perfect, a hammy collection of B movie clichés and sub-Arnold witticisms titled “Chubby Rain,” he puts everything into making this his make-or-break project.

If he can’t talk bluff his way into a deal with Hollywood’s biggest action movie sensation Kit Ramsey (Eddie Murphy), a paranoid bundle of ticks who sees conspiracies all around him, he’ll shoot the film around him thanks to Kit’s sort-of double Jif (Murphy again), a hee-hawing, braces-laced Burger King fry cook who just wants to belong. If Martin’s a con man with the heart of gold (he’s not above lifting a lover’s credit card to stretch his meager resources), Murphy’s geeky caricature is a sweet, anything-to-please everyman and he almost steals the film by, ironically, delivering his least showy performance of the last couple of decades.

Bubble-headed farm girl Daisy (Heather Graham) steps off the bus from Iowa (or wherever) chirping to passers-by with all sincerity “Where do I go to be a star?” Within hours she lands the co-starring role and begins sleeping her way up the “Chubby Rain” production hierarchy, all to expand her part. Studio gopher turned cinematographer Dave (Jaime Kennedy) surreptitiously sneaks cameras and equipment off the lot for a day’s shooting. This is the beg, borrow, and steal school of filmmaking in every sense of the term, but the sense of adventure and excitement is so infectious you can’t help but cheer on even the most insidious plot.

Director Frank Oz mixes the insider gags with absurd visual gags and outrageous show-biz clichés and comes up with a Mickey and Judy film for the cinema savvy 90s, cynical and romantic all at once. It’s the funniest and most loving tribute to outsiders and misfits with big screen dreams since Tim Burton’s Ed Wood.

Also on Blu-ray and DVD and on SVOD through Amazon Video, iTunes, GooglePlay, Fandango, Vudu and/or other services. Availability may vary by service.
Bowfinger [Blu-ray]
Bowfinger [DVD]