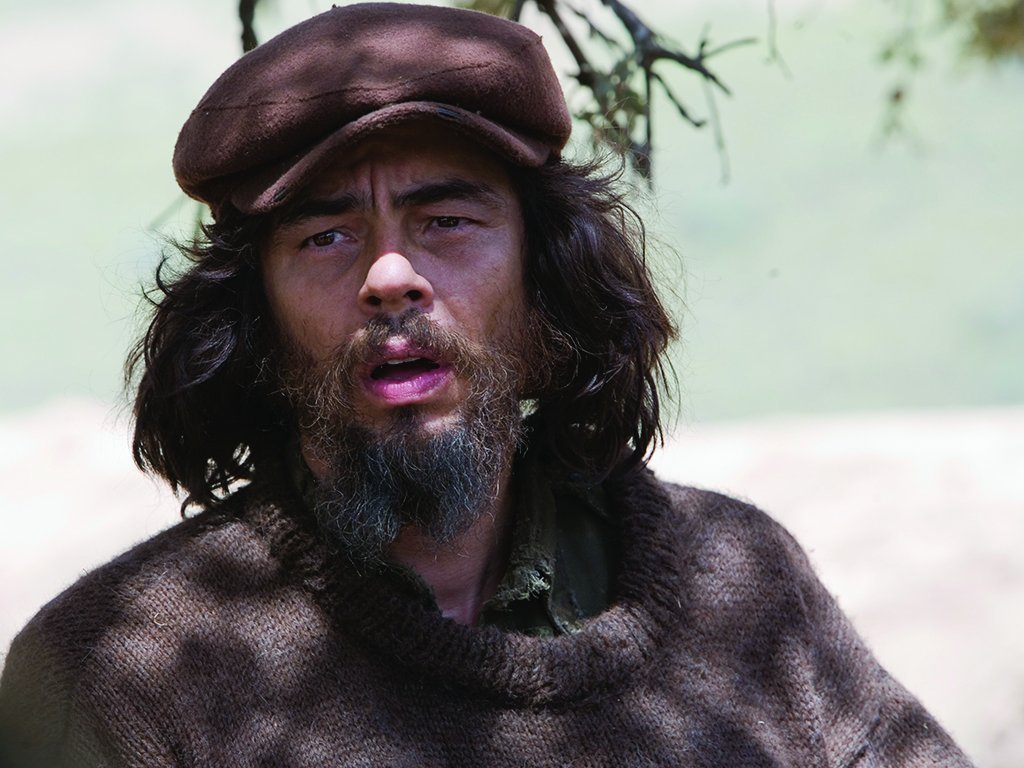 Steven Soderbergh’s Che (2008) is both two features and one work, a 4 ½-hour production that carves out what Soderbergh, producer/star Benicio Del Toro, and screenwriter Peter Buchman see as the two defining periods in the life of Ernesto Che Guevara: the Cuban Revolution and the Bolivian expedition. Except for a brief scene where Guevara meets Fidel Castro in Mexico City and newsreel-like segments chronicling Guevara’s 1964 visit to New York and address to the United Nations. There’s practically nothing of his personal life, no effort to put his campaigns in political or social context, and no attempt to address his controversial actions (including the execution of political prisoners) as part of Castro’s government in the aftermath of the Cuban victory.

It’s not that Soderbergh and screenwriter Peter Buchman assume that spectators will arrive with knowledge of that history. You can glean some of that from the dialogues, from Guevara’s idealistic drive, and from the New York sequences and his unblinking enforcement the revolutionary code on deserters and criminals in the jungle. Che is neither hagiography nor deconstruction and it is certainly not an exploration of the man behind the myth. It’s about how Dr. Ernesto Guevara transformed himself into the revolutionary leader Che, an idealist with a gun, a teacher with a mission, a single-minded warrior for social justice who never betrays his feelings to his followers. And it’s a classic rise and fall, each part a different film – the underdog campaign and triumph in Cuba in Part One, the effort to repeat it in Bolivia, where it failed, in Part Two – that are reflections of one another, two parts of a whole. The rise and the fall. The success and the failure. The inspiration and the disillusionment.

Soderbergh photographs the films himself (under the credit Peter Andrews) in widescreen and lush color, shooting in long, deliberate takes that soak in the textures of the experience and offer the sense of time passing. There’s a romanticism to these guerrillas in Eden (even if they are carrying guns) that is more idealized than convincing, but the immediacy of their day-to-day lives—training, working, interacting with local farmers and dispossessed peasants—is as captivating as the battles and skirmishes.

Throughout, Soderbergh keeps an emotional distance from Guevara, and Del Toro’s Che never breaks character: Once he embraces the role of revolutionary leader, Guevara leaves his personal life behind to be the teacher, the healer, the exemplar of the revolutionary code, forever setting an example.

Benicio Del Toto won the best actor price at the Cannes Film Festival and at the Goya Awards (Spain’s equivalent to the Oscars).

Rated R, in Spanish with English subtitles and some spoken English

Criterion presents each of the two parts of the four-and-a-half hour epic is separate disc of the two-disc box set on both Blu-ray and DVD. The commentary by Jon Lee Anderson, the historical consultant to the film and the author of a Che biography, is only tangentially concerned with the film. It’s more like a historical lecture focused on the man behind the portrait and the events and details that were left out of the film. More illuminating is the 49-minute “Making Che,” an original documentary that charts the origins and long development of the project and the guerilla approach to shooting what was turned into an epic. It was also the first feature shot on the digital RED camera and the 33-minute “Che and the Digital Revolution” offers both a technical and practical portrait from the perspective of the filmmaking team. Also includes the 1967 documentary “End of the Revolution,” interviews with participants in and historians of the Cuban Revolution and Bolivian campaign, 14 deleted scenes and a booklet.