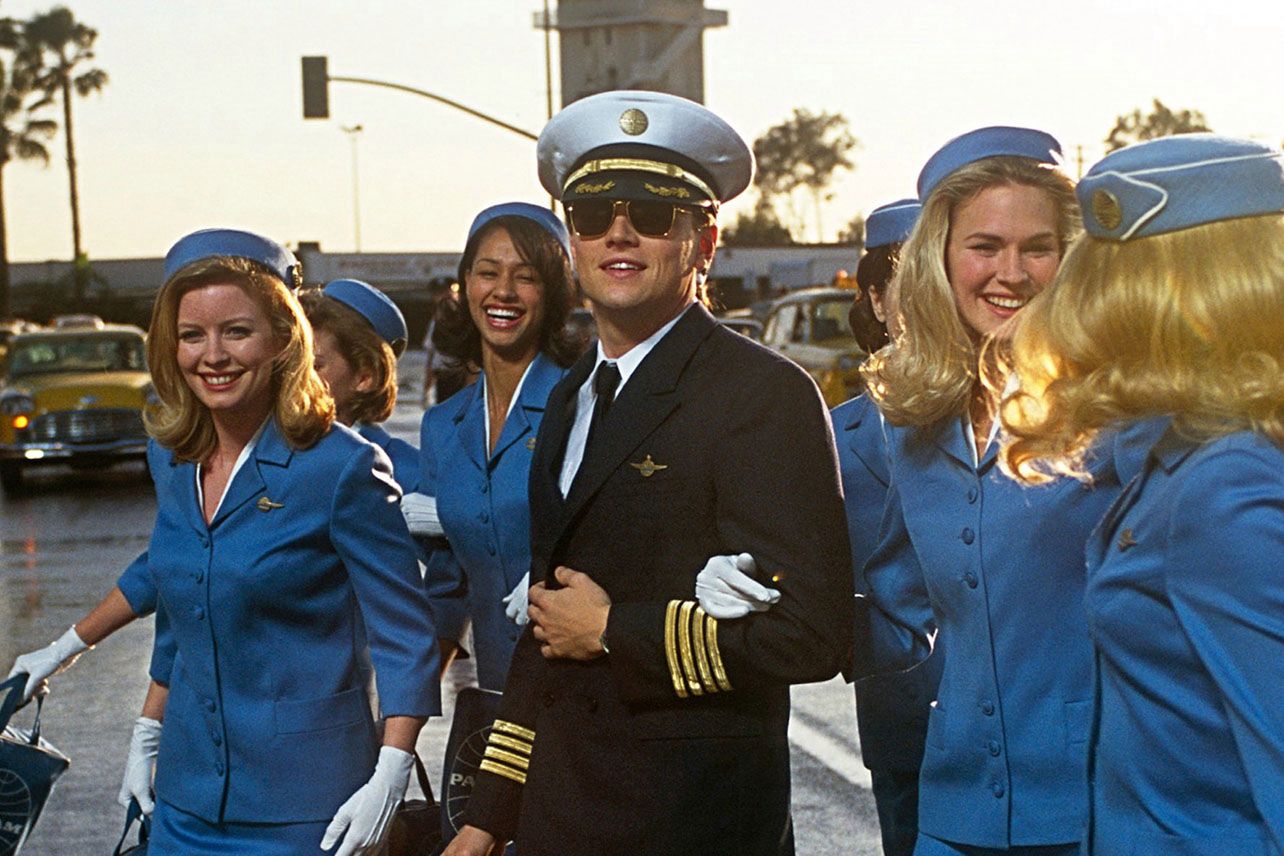 FBI agent Tom Hanks chases check forger Leonardo DiCaprio in Catch Me If You Can (2002), Steven Spielberg’s take on the true story of Frank Abagnale, Jr.

The real-life Abagnale successfully passed himself off as a pilot, a lawyer, and a doctor, and passed over $4 million in forged checks, all before his 21st birthday. As played by DiCaprio, Frank is a teenage kid driven to restore the American Dream that has soured on his father (Christopher Walken) and the nuclear family that has disintegrated with his failure.

The screenplay, based on the memoir by Abagnale, reduces his motivations but Spielberg captures that adolescent sense of adventure, of challenge, of gameplaying in this outlaw hero beautifully as he begins his crime career at the age of 16. Spielberg likes Frank, appreciates his curiosity and his drive to master the elements of his cons and forging schemes, and has a sympathy for the sadness that motivates him.

Spielberg beautifully creates the culture of the 1950s nuclear family shattered and the American Dream soured. The color and clarity of the crisp images do a nice job at setting the late 1950s/early 1960s look of middle class lives and American Dream iconography.

DiCaprio’s portrait of a kid on a tear, pleading with his father to finally act like one, is wonderful. Walken earned an Oscar nomination for his painfully vulnerable performance as an ambitious small businessman who is, for all his anti-government rants, very likely guilty of tax evasion. And Tom Hanks puts on a Massachusetts drawl as the lonely, driven FBI agent who makes Frank his personal mission and becomes a strange sort of father to the wayward boy.

It earned Oscar nominations for supporting actor Christopher Walken and the bouncy score by John Williams and won a BAFTA and a Screen Actors Guild Award for Walken.

Leaves Netflix at the end of September. Add to My List on Netflix

, iTunes, GooglePlay, Fandango, Vudu and/or other services. Availability may vary by service.
Catch Me If You Can [Blu-ray]

Catch Me If You Can (Two-Disc Special Edition) [DVD]

The two-disc set includes six featurettes that take the viewer through the production experience: “Catch Me If You Can: Behind the Camera” (Spielberg on the 56-day shoot), “Cast Me If You Can: The Casting of the Film” (interviews with the actors), “Frank Abagnale: Between Reality and Fiction” (the man behind the story), “Scoring Catch Me If You Can” (with composer John Williams), “The FBI Perspective” (an insider’s look at real life investigations), and “In Closing” (the production wraps).