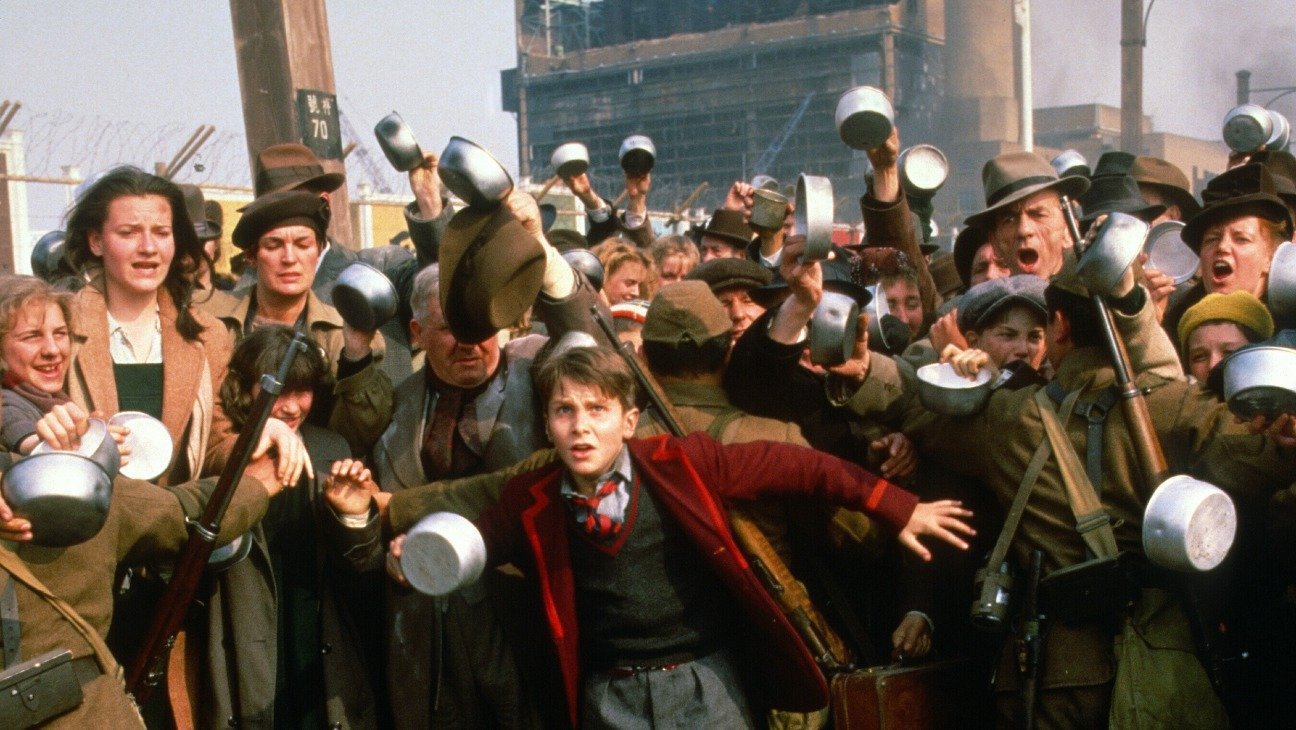 Christian Bale makes a brilliant film debut as Jim Graham, the British schoolboy living in a life of wealth and privilege in a bubble of western colonial power in the Chinese city of Shanghai. It’s 1941, before Pearl Harbor, but the war comes to Jim’s family nonetheless when Japan invades and Jim is separated from his parents in the chaos and panic. It’s a terrifying moment as the crowds swamp the small boy and carry him away, and the terror doesn’t abate as Jim is left adrift on the streets, ducking Japanese soldiers and until he’s take to a prison camp for American and British civilians.

Apart from separate barracks for the British and American war prisoners, there’s no real plan or protection. They’re left to fend for themselves, kids included. Without his own parents to look after him, Jim is torn between the maternal attention of a weary, disillusioned British woman (Miranda Richardson, devastating) and a cynical American (John Malkovich) who quickly establishes himself as the camp’s black market operator and sees Jim’s potential as a gopher able to work under the radar of the guards.

Wearing oversized fatigues and covered in mud and grime, Jim weaves through the hardship and poverty by creating games and finding escape holes, and he even holds on to a respect for the Japanese fliers in the airfield across the barbed wire. In one of the film’s most powerful scenes, he salutes the fliers with a song—a Welsh hymn sung in a beautiful soprano—that transforms the culture clash into a moment of shared reverence. The soldiers turn to the war orphan, recognize the integrity of his offering, and find honor in this “difficult boy.”

One of Spielberg’s most underrated films, Empire of the Sun is a perfect marriage of the director’s affinity for a child’s wonder and innocence, his grown-up understanding of the horrors of war, and his impeccable technique. It was a box-office disappointment met with mixed critical response but, apart from John Williams’ sentiment-dripping score, it remains one of his finest achievements.

Nigel Havers and Joe Pantoliano co-star and a young Ben Stiller has a small role.

It was nominated for six Academy Awards and winner of three BAFTAs, including awards for the rich cinematography by Allen Daviau and the score by John Williams. Daviau was also recognized by his peers in the American Society of Cinematographers, who awarded him the ASC prize for outstanding achievement in cinematography in theatrical releases.

The DVD and Blu-ray releases feature the 1987 documentary “A China Odyssey: Empire of the Sun, a Film by Steven Spielberg.”