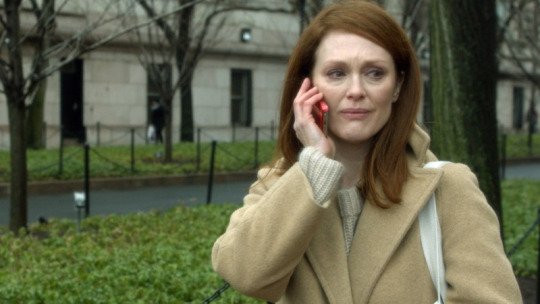 Julianne Moore won her first Academy Award (after four nominations since Boogie Nights in 1998) for Still Alice (2014), playing a renowned linguistics professor who is diagnosed with early-onset Alzheimer’s disease and starts to experience her identity, her sense of self, slipping away. It’s the kind of performance that doesn’t just support a film, it gives the film its breath of life.

Dr. Alice Howland is in the prime of life: happily married to a fellow academic (Alec Baldwin), the mother of three grown children, an expert in her field, and a professor at a respected university where she enjoys teaching. It comes on slowly: losing a word while giving a lecture, misplacing items, forgetting appointments, and finally getting lost on a routine jog across the campus that’s a second home to her. When the worst is confirmed by a neurologist, the denial is replaced with coping mechanisms, though even those are a temporary measure as the decline speeds up and that sharp intellect softens and falters, along with her own body. As she loses her identity along with her memories and her attention span, her eyes start to fog over and her body seems to collapse into itself, deflating like fragile old woman aging before her time. She becomes something of a ghost of her former self and it is heartbreaking, thanks to the depth and nuance with which Moore inhabits the mental and physical deterioration.

Adapted from a novel by Lisa Genova with compassion and sensitivity, this was clearly a labor of love from Richard Glatzer and Wash Westmoreland, partners in filmmaking and in life (they married in 2013). Glatzer co-directed while his body was breaking down from complications of ALS and died a few months after the film was released. It’s hard to imagine that Moore’s commitment to the role wasn’t in some way touched by his ordeal.

Kristen Stewart stands out from a fine cast as Alice’s youngest daughter, a free spirit who cuts through the denial to sustain whatever is left of her mother for as long as she can while her siblings seem to distance themselves, as if it were a communicable disease (it’s actually genetic, which means one of them may have inherited the condition—another prime arena for denial). So long dismissed for the Twilight films, Stewart is a smarter and more engaged actress than she’s often given credit for and she suggests a history behind this quietly resilient mother-daughter bond.

The rest of the film is admirable but never as nuanced or as rich as Moore’s performance. The cocoons of success, supportive family, and an academic and medical community that provides the best care available in New York can’t stop or even slow the ravages of the disease but it does provide a support net greater than any of us will know. Maybe that makes her inevitable decline even more affecting, but it does give us reassurance that even as she loses herself, her family will not forget her.

Moore also won the BAFTA and Screen Actors Guild Award for her performance, as well as awards from numerous critics groups.

Also on Blu-ray and DVD and on SVOD through Amazon Video, iTunes, GooglePlay, Vudu and/or other services. Availability may vary by service.
Still Alice [Blu-ray]
Still Alice [DVD]

Pingback: Stream On Demand|What to watch the week of Friday, May 15
Comments are closed.