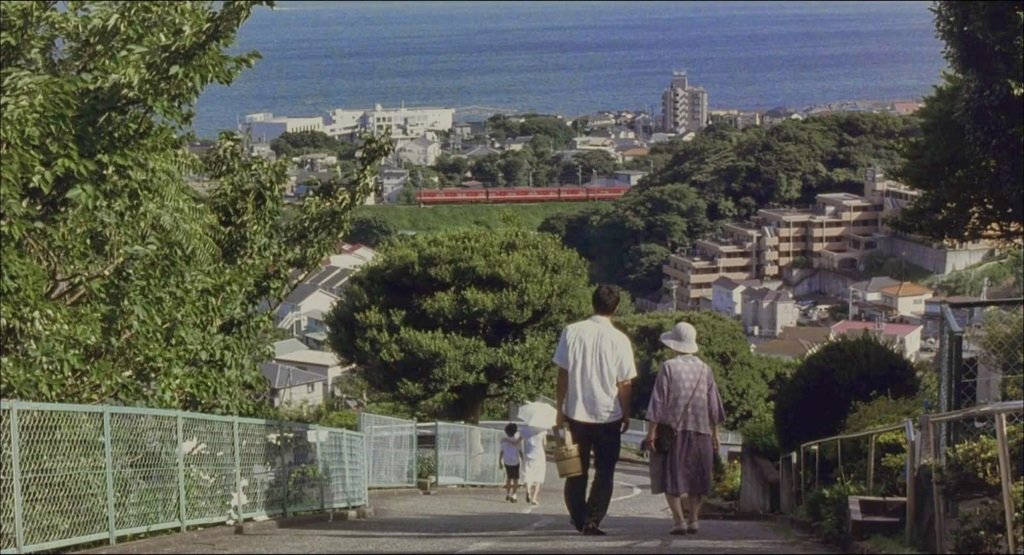 A family drama about absence, expectations, disappointments and acceptance, Hirokazu Kore-eda’s Still Walking (Japan, 2008), is framed (and in effect defined) by the death of an eldest son. That death happened fifteen years before but the family still gathers to commemorate the memory of Junpei, who drowned saving a child swept off the nearby beach and has been all but deified into an impossible ideal of potential and perfection that the father (Yoshio Harada) uses to measure his other son.

Once the local doctor and still hanging on to the honorific title in forced retirement, the old man had put all his hope in Junpei taking his practice. His youngest, Ryo (Hiroshi Abe), now forty, has “rebelled” by becoming an art restorer and married a young widow with a child to boot! The daughter (You) plays the chatty diplomat while her husband dozes or goofs with their children during the family rituals. Mother is the thankless host, but even she can’t hide her disappointment in a grandchild that doesn’t share her family blood.

As the film unfolds over the visit, the family dynamics play out with a familiarity to the grown children, as if the grievances and grudges pick right back up when they return home, preserved in amber by parents still mourning the future that died with Junpei. There are no confrontations, here; they endure the slights and the weather the discomfort like a necessary negotiation. But genuine connection can still be briefly made, outside of obligations and expectations, out from under the shadow of Junpei’s death, when they can just be family.

Kore-Eda is marvelous with these little moments, at observing the reverberations of discomfort around the table at a family meal after a thoughtless remark or a bitter rebuke, at sensing the polite distance the parents keep from Ryo’s widowed wife, or watching the still life of a family at rest. “Even when people die, they don’t really go away.” Those left behind can only keep walking.

, iTunes, GooglePlay and/or other services. Availability may vary by service.
Still Walking (The Criterion Collection) [Blu-ray]

Criterion releases the film on both DVD and Blu-ray and features new video interviews with director Hirokazu Kore-eda and director of photography Yutaka Yamazaki and an original half-hour documentary on the making of the film with behind-the-scenes footage of the director and actors on the set, plus a booklet.