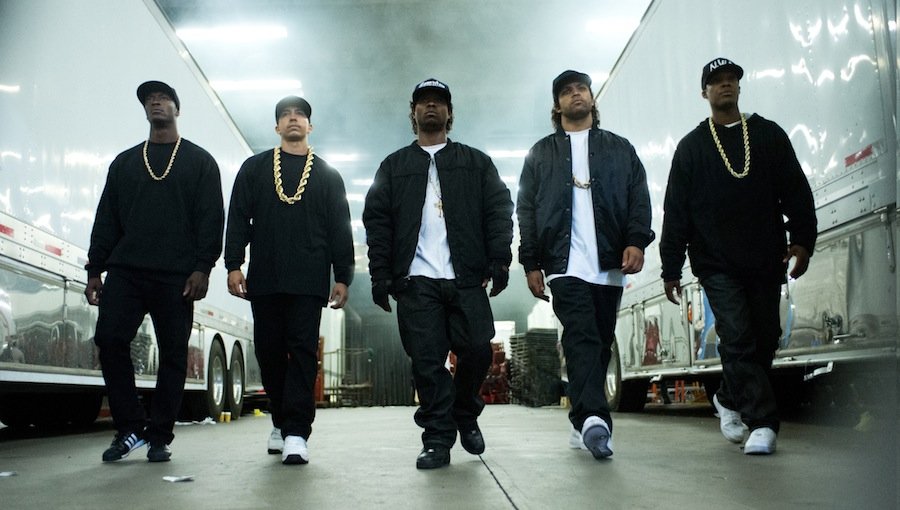 Billed as “The World’s Most Dangerous Group,” N.W.A. was a musical bomb that blew up the hip-hop world with such force that the reverberations were felt all through popular culture.

Straight Outta Compton, developed by N.W.A. founding members Ice Cube and Dr. Dre and directed by F. Gary Gray, dramatizes origins and impact of the provocative hip-hop group that made stars of Ice Cube, Dr. Dre, and Eazy-E and launched gangsta rap, and it takes measure of the cultural earthquake they set off. It’s also a terrific story of young rappers who band together with drug dealer to finance their own recording studio and hook up with promoter Jerry Heller (Paul Giamatti), a Jewish music industry veteran who sees the potential in their incendiary songs and electric performances, to send West Coast shock waves through the East Coast-dominated hip-hop scene. The young cast brings energy and emotional heat to their roles—Corey Hawkins as Dr. Dre and a riveting Jason Mitchell as Eazy-E, both young actors in their first major roles, and rapper O’Shea Jackson Jr. playing his father, Ice Cube—and the filmmaker F. Gary Gray places the story of the internal conflicts that tore the group apart within the volatile culture of South Central L.A., which he brings to life with vibrant images and energetic scenes often on the verge of combustion.

It’s a musical biopic in an urban warzone and we see how the culture of gangs and drugs and poverty and simmering racial conflicts shaped the group’s angry message. Gray’s filmmaking career was launched by Ice Cube 20 years earlier, when he tapped the music video vet to direct his stoner comedy Friday (1995), and he brings his own history with these artists (he also shot solo videos for Cube and Dr. Dre) to find the people behind the images they project in performance. You don’t have to be a fan of the music to appreciate the story behind the cultural earthquake.

It was one of 2016’s unqualified hits and it earned an Oscar nomination for its screenplay.

Rated R for language, nudity, violence, and drug use.

The Blu-ray and DVD releases include filmmaker commentary and five featurettes. The Blu-ray also includes a bonus featurette, deleted scenes, and a deleted song performance, plus bonus DVD and Ultraviolet Digital HD copies of the film.

When will it be on cable?

Pingback: What to watch: Miles Davis, a superhero smackdown, a Norwegian 'Wave,' and a Colombian 'Serpent' - Stream On Demand
Comments are closed.