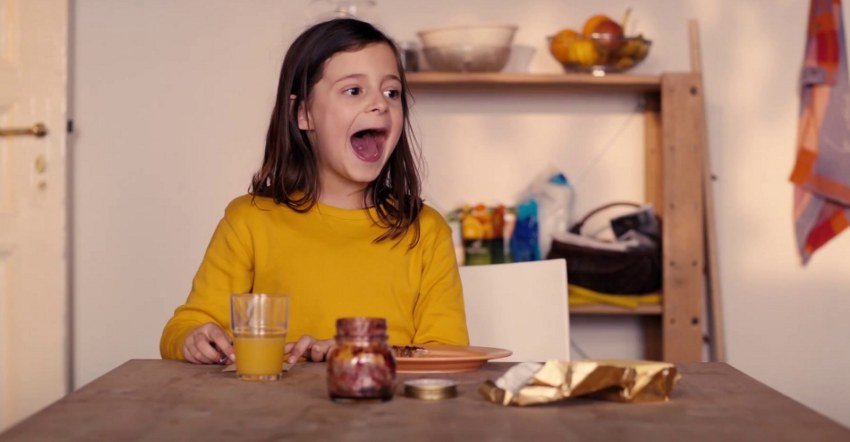 Ramon Zürcher was a student at the film school founded and taught by esteemed director Bela Tarr when he made his feature debut with The Strange Little Cat (Germany, 2014), an offbeat film set almost entirely in a small middle class apartment in Berlin. There’s no real story to speak of but it is filled with the details of life in that apartment as two grown children come back to visit and the family prepares for guests to celebrate the reunion. It’s not about the drudgery of daily life, however, but the odd quirks and personality traits that come out in close quarters. And there is a cat too, a curious tabby who prowls through the film, observing and interacting, and it is by far the least strange thing in the film.

There’s a little sister who gleefully screams at the top of her lungs every time the blender is fired up, a mother who seems off in her own world dropping odd remarks and tetchy criticisms with a crooked smile, an unseen upstairs neighbor who lowers a pail past their window to get groceries, siblings who fall into old patterns with jokes that make no sense to the rest of us. The film see-saws with tension and relief as characters enter and exit, stopping to swap stories that are both mundane and weird before moving on.

Zürcher ultimately makes his film a celebration of the strange magic of everyday life (even physics seems to have their own personality, such as a bottle that wobbles in a kind of perpetual motion when placed just right) and the odd dimensions of human behavior and personality that makes families at once unique and alike. This is more of an arthouse piece than a traditional story but it is playful and humorous and affectionate, an appreciation of life rather than a satire or a critique.

, iTunes, GooglePlay and/or other services. Availability may vary by service.
The Strange Little Cat [DVD]

The DVD features a Q&A with the filmmakers and cast from a screening at Film Society of Lincoln Center.