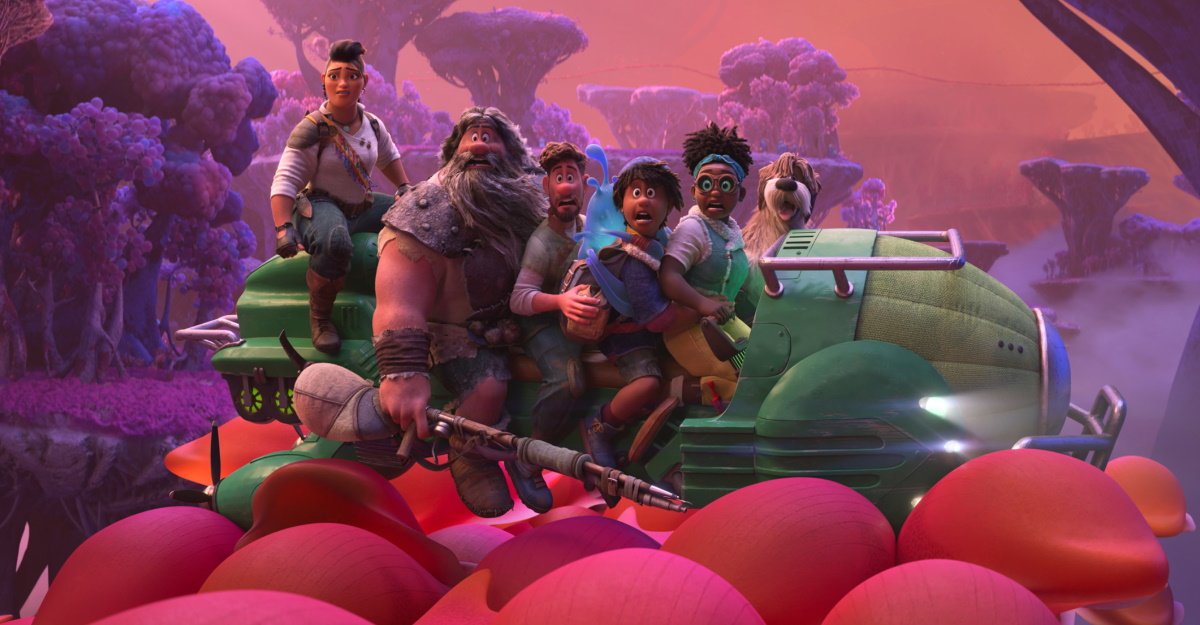 The animated adventure “Strange World” (2022, PG) sends a multi-generational family of explorers (along with their three-legged dog) into an weird and wonderful underground world that channels Jules Verne by way of Dr. Seuss. This odyssey from Disney also features an environmental message and a multi-cultural world along with the family drama and fantastical adventure. Features the voices of Jake Gyllenhaal, Dennis Quaid, Jaboukie Young-Whit, and Gabrielle Union. (Disney+)

Noah Baumbach tackles Don DeLillo’s dense 1985 satirical novel of academia, post-modernism, and consumerism in “White Noise” (2022, R). Adam Driver stars as college professor specializing in Hitler Studies and Greta Gerwig is his suburban wife and mother of four, both struggling to hold it together when disaster strikes outside of their college town. It’s an absurdist portrait of America on the verge of self-destruction adapted from a novel considered unadaptable. Don Cheadle, Jodie Turner-Smith, and André L. Benjamin costar. (Netflix)

A bright, gifted young girl (Alisha Weir) takes on her cruel school headmistress (Emma Thompson) and her crooked parents (Stephen Graham and Andrea Riseborough) in “Roald Dahl’s Matilda The Musical” (2022, PG). The screen adaptation of the hit stage musical celebrates imagination and compassion in a world that seems intent on crushing the spirit of youthful creativity. Lashana Lynch costars as a supportive teacher. (Netflix)

Charlie Cox plays a high-ranking MI6 agent who gets tangled in a complex plot in the limited series “Treason” (TV-MA). Olga Kurylenko costars in the British spy thriller as a Russian assassin who has a history with our hero. (Netflix)

On Saturday night you can experience “Lizzo: Live in Concert” (2022, TV-MA) with special guests Cardi B, SZA and Missy Elliott. (HBO Max)

A superstar cop (Charlie Hunnam) is lured out of retirement to solve a celebrity murder in the action comedy “Last Looks“ (2021, R), costarring Mel Gibson and Morena Baccarin.

International TV: an urban cop relocates to a remote mountain village and uncovers a deadly secret in “Gannibal: Season 1“ (Japan, not rated, with subtitles).

True stories: journalist Andrew Callaghan looks into the undercurrents that led to the January 6 Capitol Riot in “This Place Rules“ (TV-14).

“Encanto at the Hollywood Bowl“ (2022, not rated) reunites the original voice cast of the animated Disney musical for a live concert of the film’s original songs.

Based on a story by Joe Hill, Scott Derrickson’s horror film “The Black Phone“ (2022, R) stars Ethan Hawke as the villain and Mason Thames as a child who can speak to his earlier victims from a disconnected telephone.

The animated martial arts comedy “Paws of Fury: The Legend of Hank“ (2022, PG) is a family friendly remake of “Blazing Saddles” featuring the voices of Michael Cera, Samuel L. Jackson, and George Takei.

Streaming TV: before playing a superhero in the “Shazam!” movies, Zachary Levi played a computer geek with government secrets uploaded into his brain in the action comedy “Chuck: Complete Series“ (2008, TV-14).

Author and artist Charley Macksey codirects “The Boy, the Mole, the Fox, and the Horse“ (2022, TV-G), an animated short film adapted from his best-selling illustrated children’s book with hand-drawn animation. Features the voices of Tom Hollander, Idris Elba, Gabriel Byrne, and newcomer Jude Coward Nicoll as The Boy.

James Arness is Marshall Matt Dillon in “Gunsmoke“ (1955-1969, TV-PG), the longest-running TV western of all time. The first 14 seasons are now streaming.

“Farewell Doc Martin“ (2022, not rated) pays tribute to the beloved British series as the Christmas-themed finale brings the long-running show to its conclusion.