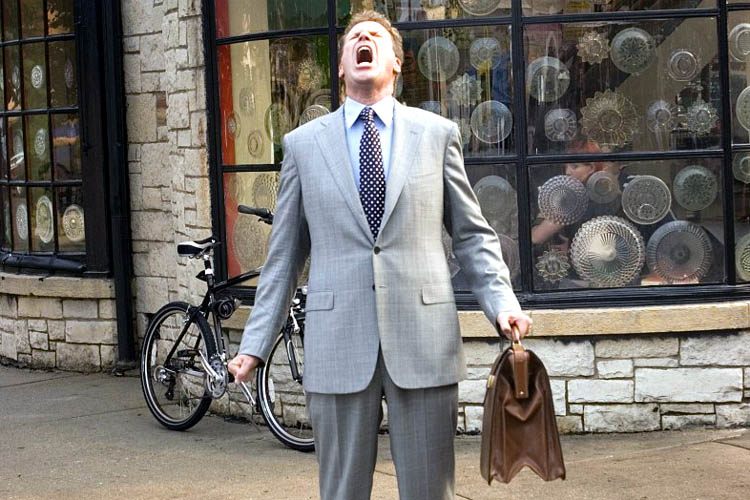 What do you do when you learn that you only have only a few months or weeks to live? Stranger than Fiction (2006) puts a fantastical twist on a time-worn premise.

Harold Crick (Will Ferrell), a lonely IRS agent with a dull existence, starts to hear voices, or rather a voice. A narrator, in fact, who suddenly takes up residence in his mind and tells him that he’s going to die.

The narrator is a novelist (Emma Thompson) struggling with her in-progress work, the story of a man trapped in a numbing routine. She’s trying to find a way to kill her protagonist when that character suddenly comes to life in the real world and decides he doesn’t want to follow that plot. He wants to live. Not just survive, mind you, but break out of his rut. And he does just that when he falls in love with a free spirited baker (Maggie Gyllenhaal) with tax issues and volunteers to untie her tangled finances. They’re opposites in every way, of course, and there’s something touching in the way they slowly warm to one another.

Thompson’s author is a chain smoking eccentric recluse with ticks and twitches, more of a caricature than a character, but Ferrell gives his best everyman performance and Gyllenhaal projects real joie de vivre in her spontaneity and passion.

There’s more than a touch of Charlie Kaufman absurdity to Zach Helm’s screenplay but it’s warmer and less caustic in the way it uses fantasy to plumb human emotions and examines the nature of storytelling. Direct Marc Forster, meanwhile, has a light touch. He doesn’t push the absurdity of the situations. He allows the humor to arise naturally from the collision of fantasy and lived existence and ends up with a sweet little tale.

, iTunes, GooglePlay, Fandango, Vudu and/or other services. Availability may vary by service.
Stranger Than Fiction [Blu-ray]

The Blu-ray and DVD release include two commentary tracks, a number of featurettes, and deleted scenes.