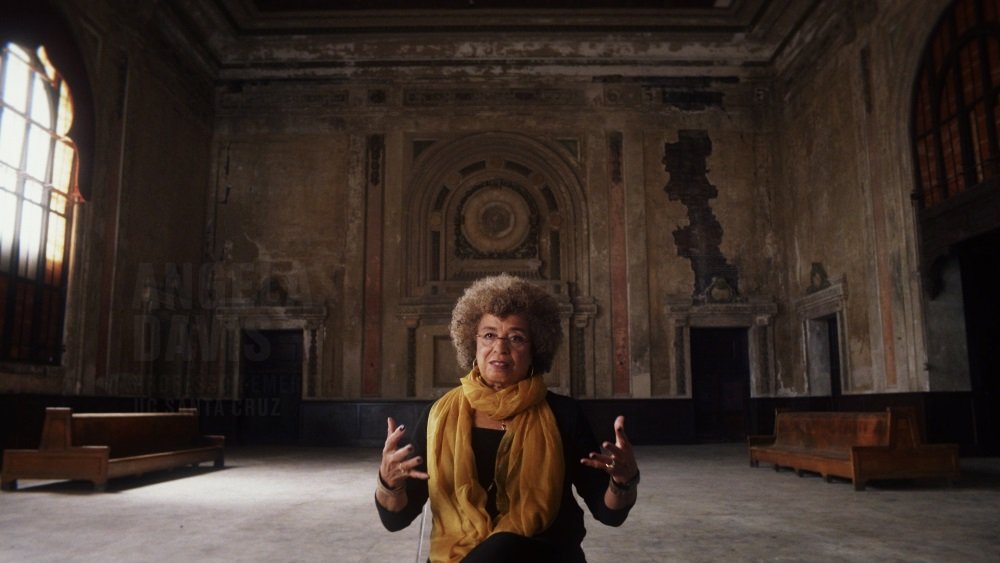 13th (2016), named after the amendment that ended slavery, casts a critical lens on mass incarceration and the private prison industry in America. It’s is a Netflix original documentary from Selma director Ava DuVernay that arrives after playing the opening night spot at the New York Film Festival.

“The movie tracks the criminalization of African Americans from the end of the Civil War to the present day, assailing a broken prison system and other examples of institutionalized racial bias with a measured gaze,” writes Indiewire critic Keith Uhlich. “It combines the rage of Black Lives Matter and the cool intelligence of a focused dissertation.” (not rated).

Looking ahead to Halloween there’s The Purge: Election Year, the third in the horror series (R), and the made-for-cable disaster spoof Sharknado 4: The 4th Awakens with Tara Reid and Ian Ziering (not rated).

Also new: the French teen buddy comedy Microbe & Gasoline (R, with subtitles), the animated video game fantasy Kingsglaive: Final Fantasy XV (PG-13), the dramas Kids in Love with Will Poulter and Cara Delevingne (not rated) and 37, based on the real-life murder of Kitty Genovese in 1964 (not rated), and the poultry power documentary Chicken People (not rated).

Available same day as select theaters nationwide is the Phantasm: Ravager, the fifth film in the horror franchise (not rated), and the comedies The Late Bloomer with Johnny Simmons and Brittany Snow (R), Flock of Dudes with Chris D’Elia and Hannah Simone (not rated), the mystery The Hollow with William Sadler and James Callis (not rated), and The Great Gilly Hopkins, based on the children’s novel by Katherine Paterson (PG).

Jamie Dornan and Mark Strong are Irish soldiers in a small UN unit under attack in the Congo in The Siege of Jadotville (2016), a drama based on real events from 1961 (not rated).

Streaming TV: the CW superhero shows The Flash: Season 2 (reviewed on Stream On Demand) and Arrow: Season 4 (reviewed on Stream On Demand) arrive as the new seasons begin on TV. Also new: iZombie: Season 2 and the apparently eternal Supernatural: Season 11 and the comedy The Grinder: Season 1, and from Netflix comes The Ranch: Season 1 Part 2 and the animated Dinotrux: Season 3.

Foreign affairs: from France comes the period comedy Marguerite (2015), a fictionalized version of the story of Florence Foster Jenkins, and the immigrant drama Dheepan (2015) from Jacques Audiard (both R), from Hong Kong come the kidnap thriller Saving Mr. Wu (2015) with Andy Lau and the action drama The Bodyguard (2016) with Sammo Hung (both unrated), and from Greece comes the comedy Chevalier (2015, not rated).

The first of the month adds a new batch of older movies to the catalog. Here are a few stand-outs: Oscar winners Unforgiven (1992) with Clint Eastwood (R; reviewed on Stream On Demand) and Patton (1970) with George C. Scott (PG) and Oscar nominee Quiz Show (1994) from Robert Redford (PG-13), comedies Dazed and Confused (1993, R) and Ferris Bueller’s Day Off (1986, PG-13), the epic western Once Upon a Time in the West (1968) from Sergio Leone (PG-13), the military caper drama Three Kings (1999) with George Clooney and Mark Wahlberg (R), and the classics Breakfast at Tiffany’s (1961) with Audrey Hepburn (not rated) and Gentleman’s Agreement (1947) with Gregory Peck (not rated).

Pride and Prejudice (2005) stars Keira Knightly as the headstrong and feisty Elizabeth Bennet, the second of five sisters with a good name but no fortune, in the adaptation of Jane Austen’s classic novel of love, class and social convention. Matthew Macfadyen is the starchy and severe Mr. Darcy, whose stiff adherence to class division is bent when he falls for the intelligent and strong-willed Elizabeth, Rosamund Pike is Elizabeth’s beautiful elder sister Jane, Brenda Blethyn and Donald Sutherland are the parents and Jena Malone, Talulah Riley and Carey Mulligan round out the Bennet sisters. Directed by Joe Wright, it’s a smart, witty and elegant adaptation. PG.

Monsters (2010) is an ingenious mix of alien invasion and giant monster movie on an indie movie budget (R). Director Gareth Edwards went on to make the 2014 Godzilla and the upcoming Rogue One: A Star Wars Story.

Cheap Thrills (2014) is a dark satire with a brutal punchline (not rated), Ben Wheatley’s A Field in England (2013) is a psychedelic trip as a medieval conspiracy thriller (not rated), and Violette (2013) is a French period piece starring Emmanuelle Devos as author Violette Leduc (not rated, with subtitles).

Also new for October: Richard Linklater’s Before Sunrise (1995, R) and Before Sunset (2004, R), all four Lethal Weapon (1987, R) films, the original The Pink Panther (1963, not rated) and five sequels with Peter Sellers, Walter Hill’s cult gang fight fantasy The Warriors (1979, R), the indie comic-drama Roger Dodger (2002) with Campbell Scott and Jesse Eisenberg (R), and the 40th anniversary restoration of the original The Texas Chainsaw Massacre (1974), one of many horror films ready to stream for Halloween (not rated).

Jennifer Lawrence’s fury and passion sustain The Hunger Games: Mockingjay – Part 2 (Amazon Prime and Hulu), the fourth and final film in the young adult franchise of teen gladiators-turned-rebel liberators. It drags the last book out with extended battles and too much talk but it’s faithful to the grim tone and fatal twists of the source. PG-13. Reviewed on Stream On Demand here.

HBO is banking on the ambitious science fiction series Westworld to be its next Game of Thrones. Anthony Hopkins and Evan Rachel Woods star in the rethinking of Micheal Crichton’s seventies science fiction thriller, where something is happening in the robots of an exclusive adult theme park. It was co-created by Jonathan Nolan, co-writer of the Batman movie trilogy and the cyber/conspiracy TV show Person of Interest, and it has an ambitious scope and a promising start. The first episode debuted on Sunday and is now ready to stream and the second arrives on Sunday evening. Features nudity and violence.

Deadpool (2016) is a superhero film with a sardonic sense of humor, extreme violence, and a self-aware anti-hero (Ryan Reynolds) (R). Reviewed on Stream On Demand.

Cop Car (2015) stars Kevin Bacon as a corrupt sheriff on the trail of two boys who stole his police cruiser, which has a dead body in the trunk (R).

Also new this month: the crime drama The Place Beyond the Pines (2012) with Ryan Gosling and Bradley Cooper (R), David Cronenberg’s Eastern Promises (2007) with Viggo Mortensen (R), Sam Raimi’s Spider-Man (2002) and Spider-Man 2 (2004) with Tobey Maguire in the best Spider-Man movies to date (PG-13), and the cult comedy Repo Man (1984) with Emilio Estevez, Harry Dean Stanton, and a plate of shrimp (R).