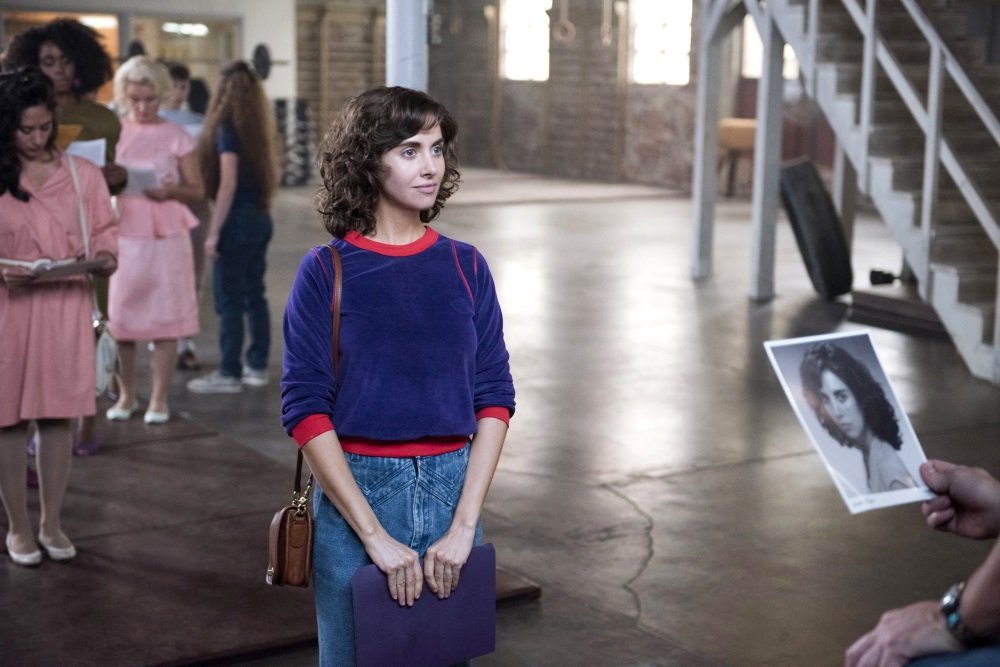 The Netflix original comedy GLOW: Season 1 stars Alison Brie as a frustrated actress in 1980s Los Angeles who answers a casting call for “unconventional women” and finds herself cast in a women’s wrestling cable series. The series was real: “GLOW: Gorgeous Ladies of Wrestling” played on cable for years. This series, created by Nurse Jackie veterans Liz Flahive and Carly Mensch and executive produced by Orange Is the New Black creator Jenji Kohan, plays on the nostalgia (big hair, day-glo tights, cheesy music) but also the conflicts, the bonding, and the creation of outrageous characters.

“The characters are smart enough to know how reductive these personas are; GLOW is smart enough to show how fiercely owning these roles — which, at least, give women power-bombing agency — can be liberating, even subversive,” writes New York Times critic James Poniewozik. “Not to mention fun. In the ’80s-movie tradition, GLOW is at heart a scrappy-misfit story, complete with training montages…. At the same time, GLOW becomes an insightful story about making art from trash…”

Betty Gilpin is her best friend, a former soap opera actress and new mother who becomes her nemesis in the ring, Marc Maron plays the ringmaster, a chain-smoking, coke-snorting B-movie director hired to pull the stunt into a show, Chris Lowell is the fratboy-ish sponsor, and Sydelle Noel, Sunita Mani, Kia Stevens, Kate Nash, and Ellen Wong are among the cast members of this wrestling theater troupe.

You can also stream the documentary that inspired the series: GLOW: The Story of the Gorgeous Ladies of Wrestling (2012, not rated).

Astronauts Jake Gyllenhaal, Rebecca Ferguson, and Ryan Reynolds discover a new form of Life in space that threatens all life on Earth (R). Also on DVD and Blu-ray and at Redbox.

Also new: comedy Wilson with Woody Harrelson as a neurotic curmudgeon who discovers he has a grown daughter (R), British comic drama This Beautiful Fantastic with Jessica Brown Findlay and Tom Wilkinson (PG) and Spanish-language romantic comedy Everybody Loves Somebody (PG-13).

Disney’s animated musical adventure Moana (2016) sends a different kind of Princess on a quest with a demigod (voices by Dwayne Johnson) in ancient Polynesia. “Hamilton” creator Lin-Manuel Miranda co-wrote the original songs (PG). Also for kids is the new animated short Puss in Boots: Trapped in an Epic Tale (2017).

Also new: The Stanford Prison Experiment (2015) with Billy Crudup, which dramatizes the real-life 1971 social behavior experiment that got terrifyingly out of hand (R), the young adult thriller You Get Me (not rated), and the horror anthology XX (2017), featuring short films by women filmmakers (R).

For teens and tweens is Free Rein: Season 1, about an urban American teenager in rural England who bonds with a wild horse, FreeForm comedies Baby Daddy: Season 6 and Young & Hungry: Season 5, and Bunk’d: Season 2 from Disney Channel.

True stories: Nobody Speak: Trials of the Free Press looks at new assaults on the media through Hulk Hogan’s case against Gawker Media (not rated) and American Anarchist (2016) profiles William Powell, the author of “The Anarchist Cookbook” who is now facing some regret over it (not rated).

The Oscar-winning short The Accountant (2001) is an offbeat comedy from filmmaker/actor Ray McKinnon and producer/co-star Walton Goggins (not rated).

Foreign affairs: Hong Sang-soo’s South Korean social comedy The Power of Kangwon Province (1998) and Portuguese historical drama Lines of Wellington (2014), the final film developed by Raul Ruiz and completed by his widow, Valeria Sarmiento (both not rated, with subtitles)

Star Trek: Beyond (2016), the third film in the “when they were young” reboot, delivers a warp-speed adventure (PG-13). (Amazon Prime and Hulu) Reviewed on Stream On Demand here.

Arriving Saturday night is Nate Parker’s The Birth of a Nation (2016, R).

FilmStruck presents the cinema of Indian director Satyajit Ray with over a dozen films, including the recently restored Apu trilogy—Pather Panchali (1955), his debut feature, Aparajito (1957), and Apur Sansar (1959)—and The Music Room (1959), set in the dying days of India’s feudal system.

On the Criterion Channel is Olivier Assayas’s delicate Summer Hours (France, 2008), a touching story of family, and Anthony Asquith’s crisp adaptation of Oscar Wilde’s The Importance of Being Earnest (1952) (not rated).

The Bureau: Season 3 (2017) of the riveting French espionage drama opens with the covert bureau’s top deep cover agent in the hands of ISIS.

Also new: Abbas Kiarostami’s The Wind Will Carry Us (1999) from Iran (not rated, with subtitles and Seattle filmmaker Megan Griffiths’s breakthrough feature The Off Hours (2011, not rated).