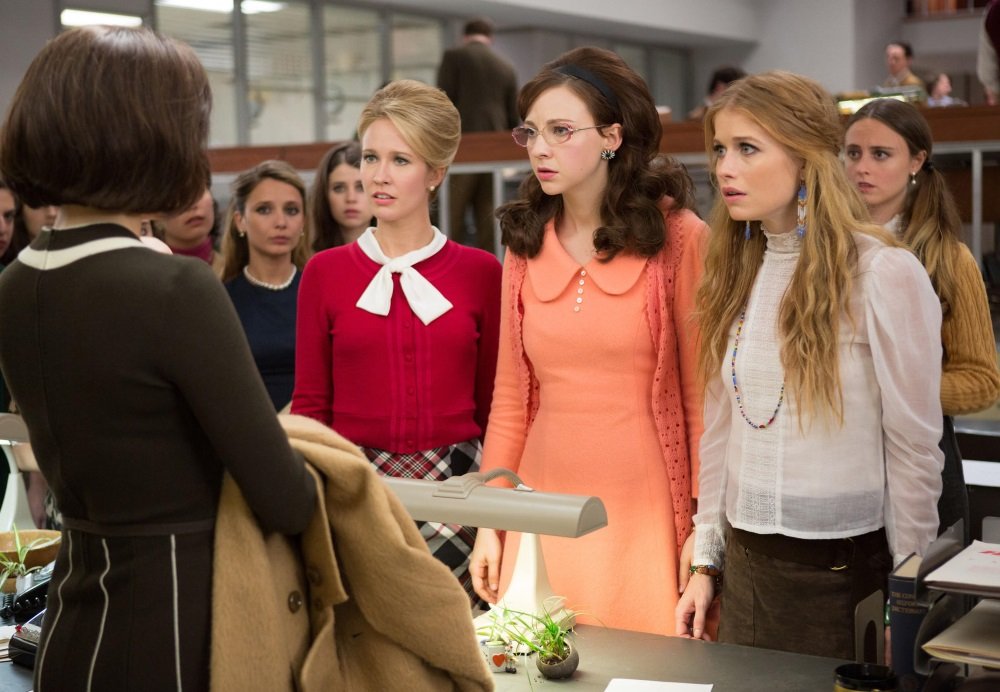 The new Amazon original series Good Girls Revolt, a fictionalized take on Lynn Povich’s 2012 book of the same name about the gender discrimination lawsuit filed by the female employees at Newsweek magazine, follows three women struggling with discrimination and sexism in the newsroom of the fictional newsmagazine “News of the Week.”

This is Amazon’s answer to Mad Men, a portrait of a business culture where men are journalists and editors and women will never rise beyond secretaries, researchers, and fact checkers as a matter of company policy. Genevieve Angelson represents the counterculture as the rebellious free spirit with a savvy understanding of the media, Anna Camp is the rich girl getting a lesson in the working world, and Eric Drake the mousy career girl unsatisfied in both her job and her marriage.

“As the series progresses, the differences from the elliptical, brooding Mad Men become more apparent. The storytelling is brisk and accessible, and the characters are complex but not inscrutable; we understand their motivations and personal crises, at times too readily,” writes Meredith Blake for The Los Angeles Times. “Good Girls Revolt is an eminently watchable, admiringly written drama that makes women’s liberation, so often portrayed as a movement forged by dour, humorless women, seem exhilarating, essential and — would you believe it? — fun.”

Amidst the fictional characters are real-life events and one real-life writing legend: Grace Gummer plays Nora Ephron, who was instrumental in organizing the lawsuit against Newsweek, a fitting bit of casting given that her mother, Meryl Streep, played Ephron in the 1986 film Heartburn.

10 episodes on Amazon Prime, but you can watch the pilot episode without a subscription. Add to watchlist.

Captain Fantastic – Viggo Mortensen is a devoted father home-schooling his kids off the grid in this loving portrait of an alternative family coming to grips with loss, rebellion, and the world outside their little Walden. It was partially shot in Washington and Oregon (R). Reviewed in Stream On Demand here.

Lights Out pits Teresa Palmer against a shadowy ghost that disappears in the light (PG-13).

Also new: the thriller Nerve with Emma Roberts and Dave Franco (PG-13) and the drama Papa: Hemingway in Cuba with Giovanni Ribisi and Joely Richardson (R).

Kung Fu Panda 3 (2016) promotes the roly-poly martial arts master Po (voice of Jack Black) to teacher and pits him against an evil warrior from the spirit realm. The animated adventure offers bright colors, likable characters, and lessons in teamwork, and is fine for young kids (PG)

Tim Burton takes on the strange true story behind the kitschy paintings that became a pop culture phenomenon in the sixties in Big Eyes (2014), starring Amy Adams and Christoph Waltz. PG-13. Reviewed on Stream On Demand here.

I Am the Pretty Thing That Lives in the House (2016) is a Netflix original horror film starring Ruth Wilson and Paula Prentiss (not rated).

True stories: Werner Herzog goes Into the Inferno (2016) in his survey of the most dramatic volcanoes in the world (not rated).

Love & Friendship (2016), a witty comedy of manners and manipulation based on the short novel “Lady Susan” by Jane Austen, stars Kate Beckinsale as the calculating and self-absorbed Lady Susan Vernon, an attractive widow on the hunt for a rich husband (PG). Reviewed on Stream On Demand here.

It’s produced by Amazon Studios, as is Complete Unknown, a psychological drama starring Rachel Weisz as a woman struggling with multiple personalities and Michael Shannon as a lover from her past. It comes to subscribers weeks after debuting in theaters (R).

True stories: Under the Gun (2016), produced and narrated by Katie Couric, looks at the debate over guns since Sandy Hook (R).

Gods of Egypt (2016) brings superhero spectacle to this mortals-versus-ancient gods adventure. It turns out Egyptian gods have British accents (PG-13).

True stories: the documentary Weiner (2016) chronicles the attempt by New York politician Anthony Weiner to resurrect his image in a 2013 Mayoral campaign after his sexting scandal (R), and Gringo: The Dangerous Life of John McAfee (2016) profiles the notorious antivirus entrepreneur (not rated).

19-2: Season 3, the gritty Canadian cop show about patrolmen in a rough neighborhood of Montreal, debuts exclusively streaming on AcornTV. All ten episodes available.