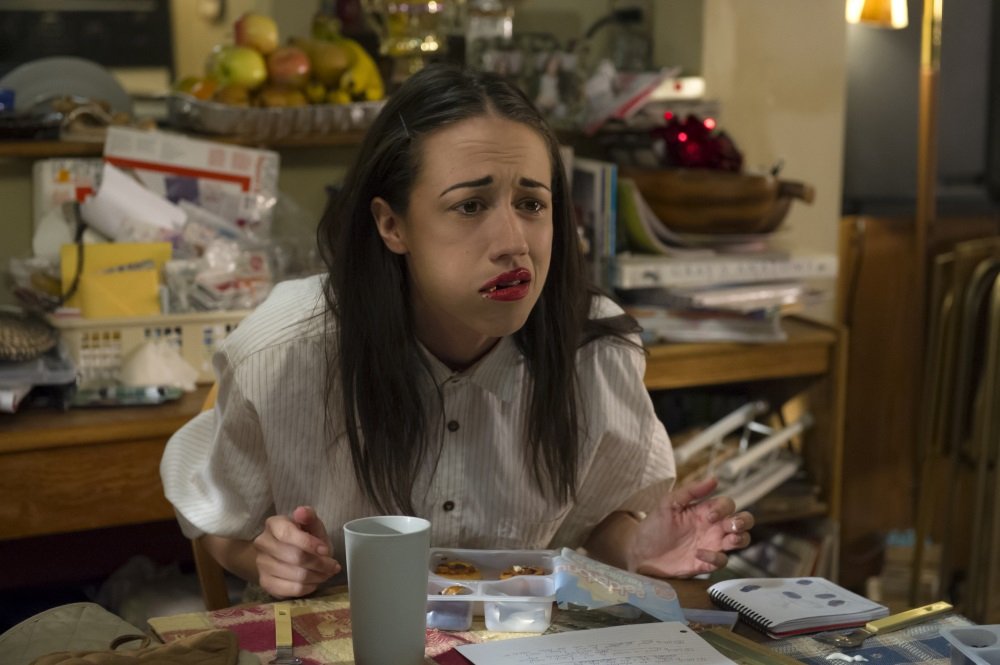 The new Netflix comedy series Haters Back Off!: Season 1 watches the singularly untalented web celebrity Miranda Sings (Colleen Ballinger) become a viral superstar through the power of denial. Ballinger created the character in a series of YouTube shorts and expands her world in a half-hour comedy series costarring Angela Kinsey (The Office) as her enabling mother, Steve Little (The Grinder) as her uncle and her manager, and Francesca Reale as her far more realistic sister.

“[C]ould a shtick so dependent upon and steeped in the world of the video-sharing platform survive when taken off of it?,” asks The Guardian TV critic Brian Moylan. “It not only survives, but it also thrives…. The comedy comes not only from Miranda’s delightfully awful performances (a slapstick rendition of All That Jazz at a Seattle gay bar karaoke contest is a series standout) but how Miranda treats each indignity as a triumph and each tiny triumph – like winning that karaoke contest – as an insult.”

Ghostbusters, the 2016 reboot starring Melissa McCarthy, Kristen Wiig, Kate McKinnon, and Leslie Jones, has been subtitled Answer the Call for home video. The theatrical version is PG-13, the extended version is nearly 20 minutes longer, and it is available on 3D on participating systems. Also on Blu-ray and DVD. Reviewed on Stream On Demand here.

Also new: Alexander Skarsgård and Margot Robbie are Tarzan and Jane in The Legend of Tarzan, a new take on the classic story (PG-13), the animated features Ice Age: Collision Course with the voices of John Leguizamo, Ray Romano, and Queen Latifah (PG) and Blinky Bill the Movie from Australia (PG), the horror film Jack Goes Home with Britt Robertson and Natasha Lyonne (not rated), the drama Les Cowboys from France (R), and the documentary Breaking a Monster (not rated).

And the documentary Doomed! The Untold Story of Roger Corman’s The Fantastic Four, about the 1990s film that has still never been released, is on Amazon Video

and other digital VOD services.

Also original to Netflix: the concert film Justin Timberlake + The Tennessee Kids (2016) directed by Jonathan Demme and the documentary Sky Ladder: The Art of Cai Guo­Qiang (2016), plus the young teens and tweens series Project MC2: Season 3 and the animated Kuromukuro: Season 2.

True stories: Best of Enemies (2015) looks at the legendary 1968 televised debates between William F. Buckley and Gore Vidal (R, reviewed on Stream On Demand here), Presenting Princess Shaw (2015) chronicles the story of aspiring YouTube singer Samantha Montgomery and Israeli producer Kutiman, who discovered her music on YouTube (not rated), and Love Between the Covers (2015) looks at the industry of romance novels (not rated).

Foreign affairs: from France comes the dramas For a Woman (2013) with Benoît Magimel and Mélanie Thierry, Grigris (2013) from Souleymane Démé, and Marie’s Story (2014) with Isabelle Carré, from Germany comes The Chambermaid (2015), and from Italy comes The Dinner (2015) with Alessandro Gassman. All subtitled and not rated.

Foreign classics: Eric Rohmer’s Full Moon in Paris (1984) is one of his “Comedies and Proverbs” (R, reviewed on Stream On Demand here) and The Marquise of O… (1976) is a rare period piece from the director, adapted from a Heinrich von Kleist story and starring Bruno Ganz (PG). Both subtitled.

New movies: the action comedy Ride Along 2 (2016) starring Ice Cube and Kevin Hart as Atlanta cops in Miami (PG-13) and Angelina Jolie’s By the Sea (2015), starring Brad Pitt and Jolie as a married couple in crisis (R).

Todd Haynes directs Carol (2015), a love story between a society woman (Cate Blanchett) separated from her husband and a department store shopgirl and budding photographer (Rooney Mara) in 1950s New York City. It was nominated for six Academy Awards, including acting nods for Blanchett and Mara, and it is a lovely evocation of the time and place and social fabric (R).

The regal Charlotte Rampling earned an Oscar nomination for 45 Years (2015) a portrait of a long, happy marriage suddenly jolted when the distant past of the devoted husband (Tom Courtenay) suddenly resurfaces. A hushed British drama of powerful feelings under placid surfaces (R).