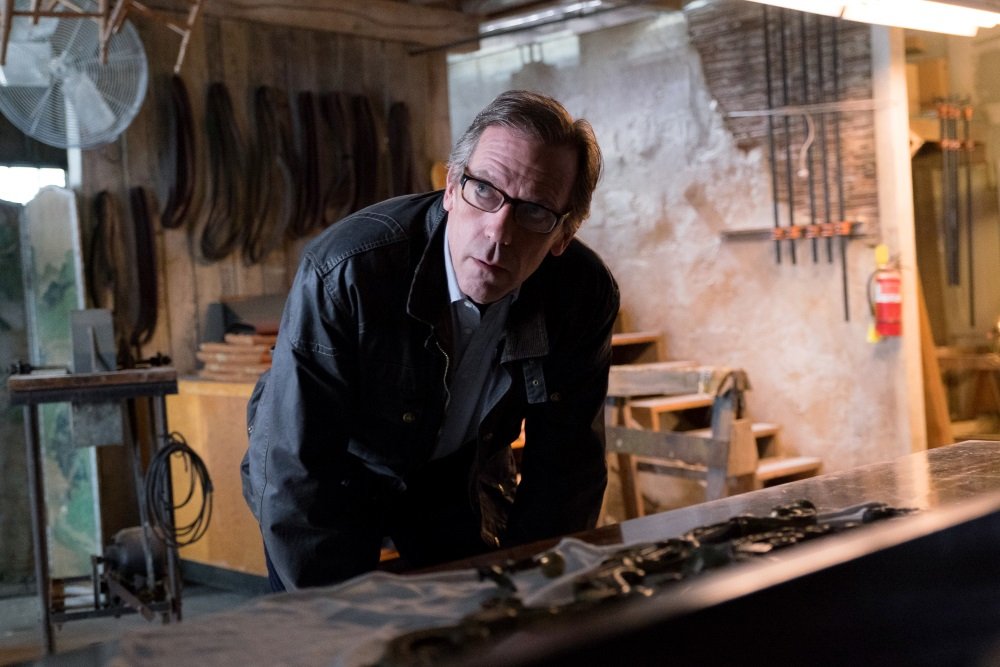 The doctor is back in: Hugh Laurie is Chance, Dr. Eldon Chance to be specific, a forensic neuropsychiatrist in San Francisco who gets caught up in the underworld, in the new Hulu original series based on the novel by Kem Nunn. He’s a tormented man who can’t treat his patients, only observe and make reports, until a woman (Gretchen Mol) walks in with stories of an abusive husband, which rouses Chance into action. Is he hero or patsy?

“Hulu’s drama could have operated comfortably under the tagline, ‘Trust no one,’ if not for the phrase’s supernatural associations,” writes Indiewire TV critic Ben Travers. “As we watch the story slowly unspool, it’s hard not to compare Eldon’s journey, deep into the seedy side of San Francisco, to Walter White’s courageous, ill-fated exploration of Albuquerque’s drug world. Both men start out with the best of intentions. Both men have a lot to lose (family, mainly) in pursuing their illicit ends. Both men admit to liking what they feel in ‘the dark.’ Eldon, though, is quicker to realize the danger in what he’s doing, both for his physical well-being and his general mental health.”

The first two episodes are now available on Hulu, with new episodes arrive each Wednesday.

Woody Allen’s Café Society is a touching story of how first love never leaves us even as we’ve moved on to other relationships, wrapped in a wry comedy of celebrity and glamor in 1930s Hollywood and New York City. Jesse Eisenberg, Kristen Stewart, and Steve Carell star (PG-13). Reviewed on Stream On Demand here.

Our Kind of Traitor, based on a John Le Carre novel, stars Ewan McGregor and Naomie Harris as civilians tangled in a British intelligence operation (R).

Netflix had such a great success with Black Mirror, a British speculative series that channels The Twilight Zone for the plugged-in 21st century, that it has produced the third season as a Netflix original. Six new episodes now available. The reviews are just starting to come out and they are raves. Here’s Willa Paskin at Slate and Erik Adams at A.V. Club.

More streaming TV: from Australia comes Glitch, a cop drama with a horror twist, from France comes the crime thriller Spotless, about a crime scene clean-up crew tangled up with the mob (with subtitles), and from Japan comes the anthology series Midnight Diner: Tokyo Stories (with subtitles).

Foreign affairs: Bridgend (2015), a dramatization of the real-life suicides of teens and young adults in rural South Wales, is from a Danish filmmaker and features locals cast in many of the roles (not rated). Reviewed on Stream On Demand here. From France comes the detective thriller Serial Killer 1 (2014) and the comedy A Mighty Team (2016) with Gérard Depardieu (both not rated and subtitled).

True stories: Being George Clooney (2016) looks at the voice actors who dub American movies in other countries (not rated).

The Fits (2016), an American indie drama about an 11-year-old tomboy (Royalty Hightower) who joins a dance company that is suddenly overcome with mysterious fainting spells, was a big award winner on the film festival circuit in 2016 (not rated).

Anthony Hopkins stars in The World’s Fastest Indian (2005), a road movie about the real-life New Zealand retiree who broke the motorcycle land speed record with a vintage Indian motorcycle (PG-13).

Spectre (2015), the 24th James Bond film, adds to the comic book origins of Daniel Craig’s 007 with the birth of a supervillain (Christoph Waltz). The opening scene, set in Mexico City on the Day of the Dead, is one of the series’ best. PG-13. Amazon Prime and Hulu.

Binge watch: The Criterion Collection leaves Hulu on November 11 so start watching those foreign classics you’ve been meaning to get to now!

Mr. Right (2015) is a romantic comedy with Anna Kendrick as an oddball romantic and Sam Rockwell as a professional assassin on the run (R).

The new streaming service from Turner Classic Movies and The Criterion Collection was set to launch on Wednesday, October 19 but was delayed at the last minute. The site lists a November start but no firm launch date yet. We’ll keep you posted.