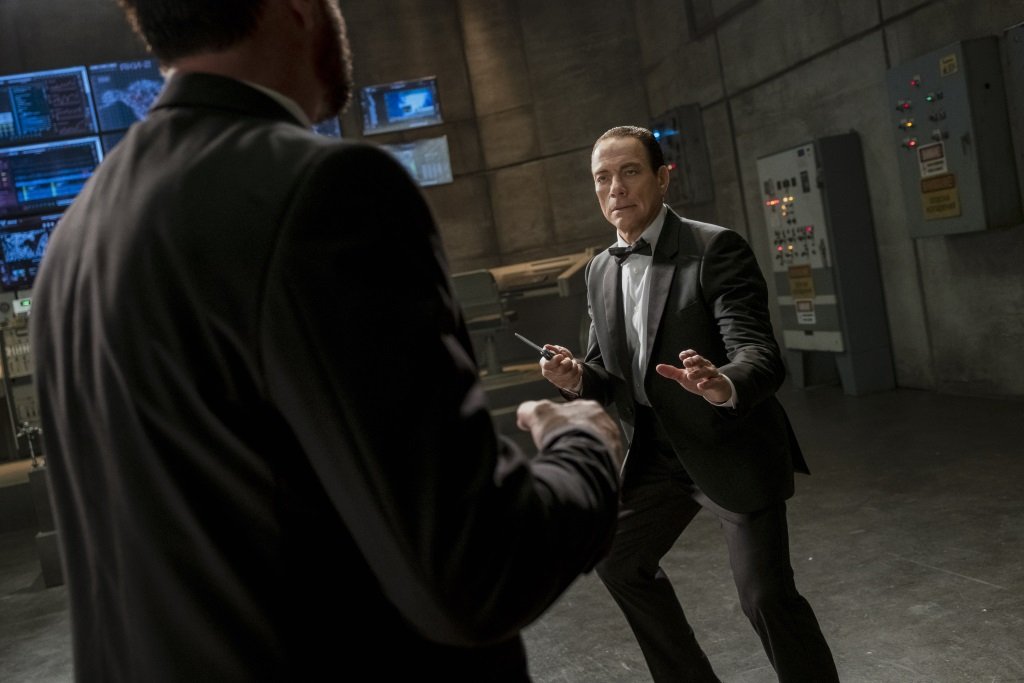 Jean-Claude Van Damme spoofs his image and his career in Jean-Claude Van Johnson, a spy comedy about a retired action star who used his movie career as cover for his real work: an international black ops agent. Van Damme has no problem satirizing his rocky past or his aging body as he returns to the field not quite in peak condition.

“[A]s nutty as Jean-Claude Van Johnson sounds, its execution feels too familiar to earn its spot,” complains Ben Travers for IndieWire. “Though the story-building in the pilot is clever enough to provide ample opportunity for good old-fashioned fun, too many easy jokes and half-baked movie homages keep the six-episode first season from fulfilling its potential…” 6 episodes on Amazon Prime.

The non-fiction mini-series Wormwood from Oscar-winning documentary filmmaker Errol Morris follows one man’s obsessive search through government secrets for the truth about the mysterious death of his father, a civilian scientist who worked at an Army research lab, and uncovers a labyrinthine story involving the CIA, LSD experiments, and conspiratorial theories. Peter Sarsgaard stars in the dreamlike dramatic recreations.

“Mr. Morris, one of the great sleuths of modern cinema (who many years ago worked as a private detective), brings to Wormwood a long acquaintance with the slipperiness of truth and the deceptions of power,” writes A. O. Scott for The New York Times. “It’s a work of journalism and of imagination, of history and portraiture, of indignation and melancholy…. As such, it takes time to absorb, and invites repeated, obsessive watching.” 6 episodes on Netflix.

The touching Marjorie Prime (2017, not rated) stars Lois Smith as an elderly widow with a fading memory and Jon Hamm as the holographic companion who channels her dead husband. This sci-fi tinged drama of mortality, memory, and loss, adapted from the Jordan Harrison stage play Michael Almereyda, also stars Geena Davis and Tim Robbins. Streaming on Amazon Prime.

Reese Witherspoon is a single mother who invites a handsome twentysomething (Nat Wolff) and his two brothers to share her vast Los Angeles home in the romantic comedy Home Again (2017, PG-13). Michael Sheen is the ex-husband who tries to woo her back from her hunky young live-in lover.

True stories: Apache Warrior (2017, not rated) profiles an Apache helicopter crew in the front lines of the invasion of Iraq, School Life (2017, not rated) follows a year in the life of two passionate teachers in an Irish primary boarding school, For Ahkeem (2017, not rated) takes you to a court-supervised high school for delinquent teens in St. Louis, and Love and Saucers (2017, not rated) tells the strange story of David Huggins who claims to have been abducted numerous times by aliens.

Available same day as select theaters nationwide is the comedy Permanent (2017, PG-13) with Patricia Arquette and Rainn Wilson as the parents of an awkward teen struggling as the new girl in school. Also new: the animated film Hedgehogs (2016, PG) from China (with English soundtrack).

The holiday films keep coming: Christmas Inheritance (2017, not rated) stars Eliza Taylor as an heiress who learns humility when she’s stranded in a small town and Michael Shannon stars in the comedy Pottersville (2017, PG-13) with Christina Hendricks, Judy Greer, and Ian McShane.

The Trip to Spain (2016, not rated) is the third comic journey for Steve Coogan and Rob Brydon bickering through an epicurean tour.

Streaming TV: Halt and Catch Fire: Season 4 is the final season of the AMC series about entrepreneurs in the early days of the Internet explosion and Bruce Campbell returns to the demon-fighting role that made him famous in the Starz horror comedy Ash vs Evil Dead: Seasons 1 & 2.

From Netflix Japan comes the time travel series Erased: Season 1 (Japan), based on the best-selling manga.

Foreign affairs: The Unknown Girl (Belgium, 2016, not rated, with subtitles) from the Dardenne Bros. follows a young doctor really exploring the neighborhood she serves. Reviewed on Stream On Demand here.

Lakeith Stanfield is an unjustly-convicted man in Crown Heights (2017, R), a drama based on a true story.

Also new: Nightcrawler (2014, R) with Jake Gyllenhaal as a ruthless freelance video newsman (reviewed on Stream On Demand here) and Rosewater (2014, R) with Gael García Bernal as a journalist imprisoned in Iran, directed by Jon Stewart.

Foreign affairs: a disenchanted architect and the elephant he grew up with as a child hit the road in Pop Aye (Thailand, 2017, not rated, with subtitles).

True stories: Rumble: The Indians Who Rocked the World (2017, not rated) looks at the contributions of Native Americans to American popular music and Buena Vista Social Club: Adios (2017, PG) revisits the legendary Cuban group two decades after the original documentary brought them an international audience.

Stage: Richard Harris reprises the role of King Arthur in 1980 Broadway revival of Camelot (1982) in a production recorded for HBO.

Sam Elliott is an aging, ailing movie star coming to terms with his legacy and his mistakes in The Hero (2017, R), co-starring Laura Prepon, Nick Offerman, and Krysten Ritter.

The Limehouse Golem (2017, not rated), a British thriller with Bill Nighy and Olivia Cooke, takes on an unsolved killing spree before Jack the Ripper.

True stories: Foreman (2017, not rated) profiles the champion boxer George Foreman, who returned to the ring after a ten-year retirement to become the oldest heavyweight champion in history. Also new: Score: A Film Music Documentary (2016, PG).

Logan (2017, R), starring Hugh Jackman in his final screen appearance as X-Men hero Wolverine, shows that superhero movies can tell a human story. This near-future thriller delivers gritty action and ruthless R-rated battles, but at heart it’s about mortality, aging, and what we do for family. Patrick Stewart co-stars. Reviewed on Stream On Demand here.

Idris Elba is a CIA agent in Paris who uncovers a conspiracy in The Take (2016, R).

True stories: Happening: A Clean Energy Revolution (2017, not rated) puts its description in the title.

Arriving Saturday night is the comedy Going in Style (2017, PG-13) with Morgan Freeman, Michael Caine, and Alan Arkin are retired buddies who plot a bank robbery.

You, Me and Him (2017, not rated) is a British comedy with Lucy Punch and David Tennant and Rachel Weisz stars in The Whistleblower (2011, R) as a UN peacekeeper who uncovers a network of corruption.

FilmStruck presents the films of Bill Morrison, including his new documentary Dawson City: Frozen Time (2016, not rated), which combines Klondike history and film history in the story of the great “Dawson Film Find” of 1978. Other films include the impressionistic Decasia (2002, not rated) and the World War I documentary Beyond Zero: 1914-1918 (2014, not rated) featuring rare archival footage of the war.

Also new are two American classics: the boxing drama The Harder They Fall (1956) with Humphrey Bogart’s final film and Elia Kazan’s A Face in the Crowd (1957) with Andy Griffith as a populist media star with a ruthless drive under his folksy charm.

Criterion Channel adds Christian Petzold’s superb drama Phoenix (Germany, 2014, not rated), set in Germany after World War II (reviewed on Stream On Demand here), and seven films by Japanese director Juzo Itami, including The Funeral (Japan, 1984, not rated) and Minbo, or The Gentle Art of Japanese Extortion (Japan, 1992, not rated), to join his previously-available films Tampopo (Japan, 1985, not rated) and A Taxing Woman (Japan, 1987, not rated). All with subtitles.