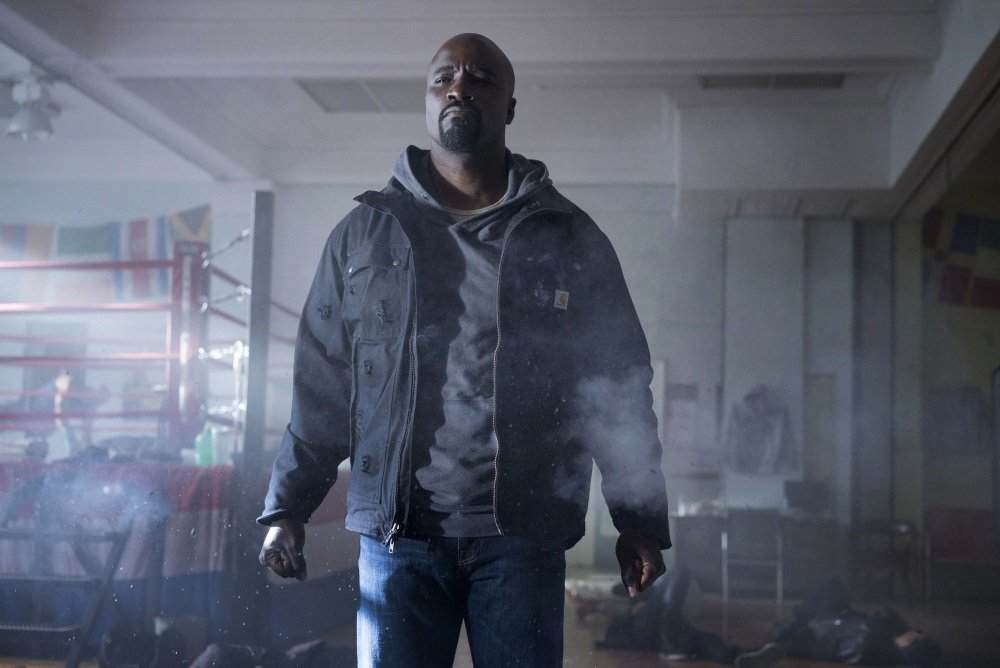 The wait is over, comic book TV fans: Luke Cage, the third Netflix original series in their gritty Marvel superhero universe, gives the urban hero for hire (played by Mike Colter) his own showcase. “Luke Cage is able to shift the boundaries of possibility for what a superhero show can be about without doing the same for how it might be structured. In many of its moments, it’s wonderful, but it suffers from the narrative sag common not only to the previous Netflix/Marvel team-ups, but most of Netflix’s attempts at the “our season is really a 13-hour movie” model,” writes Hitfix TV Critic Alan Sepinwall.

“Still, Mike Colter is every bit the charismatic hero promised by his Jessica Jones appearances…. There’s an easy confidence to the performance, befitting a character who theoretically can’t be hurt and can bend steel bars with his bare hands; he never has to puff out his chest, not only because it’s plenty broad at rest, but because he knows he’s won almost any potential fight before it’s even begun.” All 13 episodes available to stream.

In the words of New York Times critic Mike Hale, it “seems inconsequential, as if Mr. Allen, faced with filling not quite three hours of screen time, emptied his notebook and strung together a series of comic set pieces that don’t quite add up to a story. A few of the scenes are funny in themselves — one in particular, a self-referential bit featuring Mr. Allen’s character pitching a TV series to a pair of stone-faced young executives, is close to vintage. Most of them, however, have a ghostlike semblance of humor.”

Central Intelligence, an action comedy with Dwayne Johnson as a high school nerd turned maverick CIA agent and Kevin Hart as an accountant pulled into his volatile world, was one of the big hits of 2016 (PG-13). Also on DVD and Blu-ray.

Here are a couple of quirky comedies that may have slipped by you. Hunt for the Wilderpeople is a sweetly eccentric film about a problem child orphan (Julian Dennison) and a grumpy old man (Sam Neill) who become unlikely outlaws in the New Zealand wilds (PG-13) and Swiss Army Man is a buddy movie with Paul Dano as a lonely shipwreck survivor and Daniel Radcliffe as a flatulent corpse that becomes his best friend (R). Both are refreshing alternatives to the usual Hollywood offerings. Hunt for the Wilderpeople reviewed on Stream On Demand here.

Available same day as select theaters nationwide is the documentary Passage to Mars (not rated), the chronicle of a NASA training mission to the Arctic as a stand in for Mars.

The documentary Amanda Knox (2016) digs into the true crime story of an American exchange student in Italy tried for murder and finds official incompetence and misconduct (not rated).

The Imitation Game (2014) was overshadowed in 2014 by The Theory of Everything, the other film about a British genius who faced adversity while doing revolutionary work that changed the world. This is the one with Benedict Cumberbatch as real life code-breaker Alan Turing, who cracked the Nazi enigma code and gave the Allies an advantage in World War II. His true story is devastating but the film takes so much dramatic license it gives a skewed perspective on the man and the science, and the portrayal of Turing as a social misfit with a manner that suggests Asperger’s syndrome is interesting but apparently more invention than interpretation. Keira Knightley co-stars with Matthew Goode and Mark Strong. PG-13.

Foreign affairs: The First Line (2014), a Greek drama about two attorneys who sued the British to return of the Parthenon Marbles to Greece (not rated, in English), and Viva (2015), an Irish production with a Cuban setting and cast (R, subtitled).

A Cat in Paris (2010) is an animated adventure about a cat burglar’s pet cat, a partner in crime that comes to the rescue of a human girl kidnapped by gangsters. It was an Academy Award nominee for Animated Feature. From France, but Amazon presents the English language version (PG).

Also from France comes District B13 (2004) and District 13: Ultimatum (2009), two action films stirred with social commentary (R) (reviewed on Stream On Demand here), and the quasi-documentary Francofonia (2015), about the unlikely partnership that saved the treasures of the Louvre from the Nazis in World War II (not rated). All with subtitles.

True stories: No Place on Earth (2012) profiles one of the most unusual survival stories of World War II (PG-13) and 180º South (2010) is an environmentalist odyssey to Patagonia (PG).

Streaming TV: Doctor Who: The Husbands of River Song (2015) is last year’s Doctor Who Christmas Special.