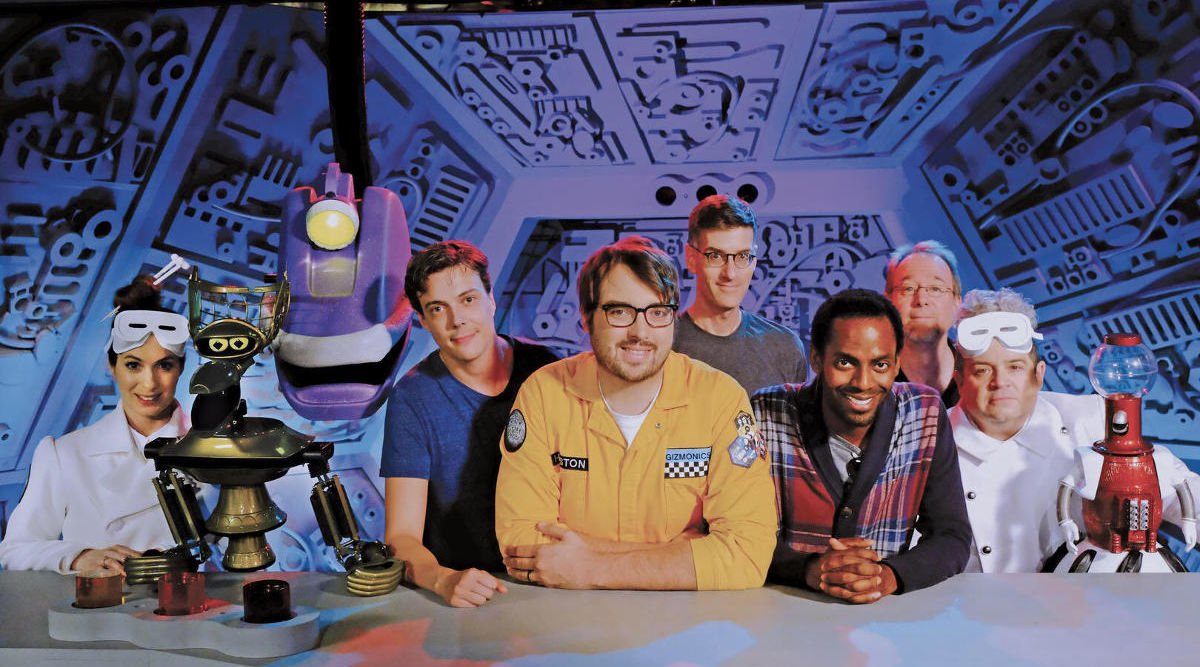 Mystery Science Theater 3000: The Return revives the cult comedy show built around robot puppets heckling bad movies with Felicia Day and Patton Oswalt as the new mad scientists (“the mads,” as the fans say) and Jonah Ray as their human test subject.

“The deceptively ingenious structure of the show offers a double experience, of both a terrible movie one might enjoy for its own sad sake and a running comical commentary on the film provided by Jonah, Crow and Tom, seen in silhouette against the screen; we watch with and behind them,” writes Robert Lloyd for Los Angeles Times. “Not every hit lands — the new writing crew, led by former The Daily Show With Jon Stewart head writer Elliott Kalan, also includes Community creator Dan Harmon and that show’s star, Joel McHale — and many references will go right past younger viewers, but with hundreds of quips in the course of an episode, enough do. And the sketches that frame and interrupt the showing are all delightful.”

The A.V. Club is currently reviewing each episode, a work in progress.

14 new episodes, beginning with their riffs and rips on the notorious Reptilicus (1961), a monster movie shot in Denmark.

Taraji P. Henson and Octavia Spencer star in the Oscar-nominated Hidden Figures, the true story of the brilliant African-American women whose unheralded work in the early days of NASA helped send the first American into space (PG). Reviewed on Stream on Demand here.

Also based on a true story, Lion stars Dev Patel as the adoptive son of Australian parents (Nicole Kidman and David Wenham) who uses Google Maps to find his lost family in India. It was nominated for six Academy Awards (PG-13).

The German comedy Toni Erdmann, about a prankster father who puts on an eccentric persona to invade the life of his workaholic daughter, was an Oscar nominee and a big winner at the European Film Awards (R, with subtitles).

The animated odyssey Kubo and the Two Strings (2016) from Portland’s Laika Entertainment is a family-friendly epic of imagination steeped in Japanese culture and mythology. Features the voices of Charlize Theron and Matthew McConaughey (PG). Reviewed on Stream On Demand here.

Sandy Wexler is the third Adam Sandler comedy made directly for Netflix (not rated).

Foreign Affairs: Come What May (France, 2016) follows the exodus of French refugees fleeing the 1940 Nazi invasion of France (R, with subtitles).

Remember Don Rickles, the godfather of insult comedy, with the documentary Mr. Warmth: The Don Rickles Project (2007, not rated).

The sexy South Korean drama The Handmaiden (2016) spins a compelling tale of con artists, forbidden love, pornography, and poetic justice (not rated, with subtitles). Reviewed on Stream On Demand here.

The Australian horror film The Babadook (2014) is both a primal fairy tale and an affecting family drama with old-fashioned scares and no explicit violence (not rated). Reviewed on Stream on Demand here.

Oscar-winning actress Brie Larson shines in the tender and touching drama Short Term 12 (2013) as a counselor at a facility for at risk, abandoned, or otherwise homeless kids (R). Reviewed on Stream on Demand here.

Inspired by a true story, the satirical War Dogs (2016) stars Jonah Hill and Miles Teller as private munitions brokers in over their heads (R).

The Man Who Knew Infinity (2015) stars Dev Patel as visionary mathematician Srinivasa Ramanujan and Jeremy Irons as his mentor at Trinity College (PG-13).

From France comes Claude Chabrol’s low-key psychological thriller The Color of Lies (1999) (reviewed on Stream On Demand here) and Jean-Luc Godard’s notorious Hail Mary (1985), which sparked protests for its modern take on the story of the Virgin Mary.