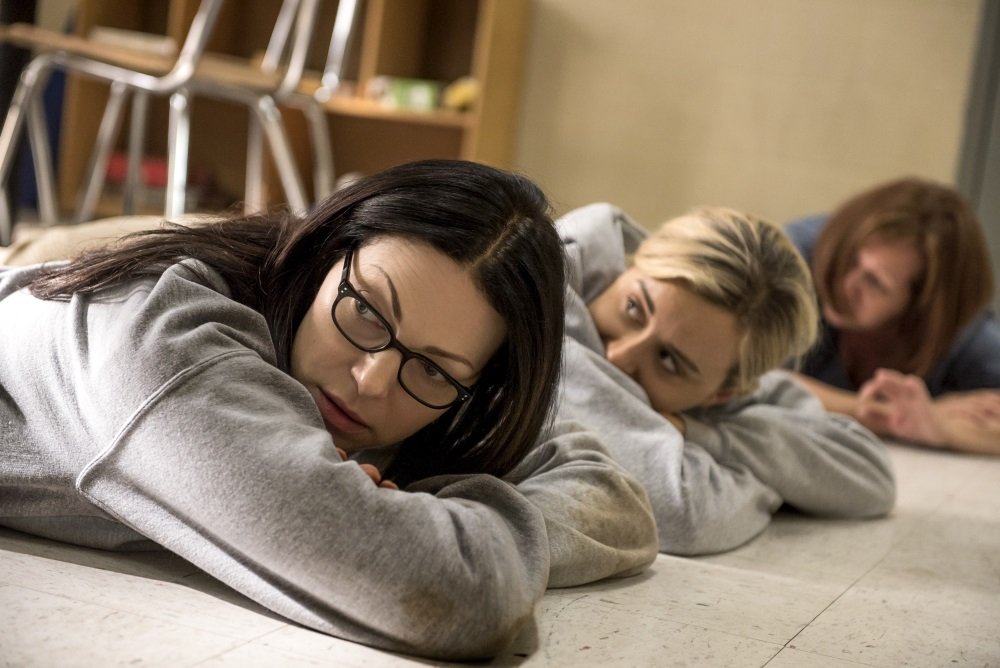 Season four of Orange Is the New Black, the best to date of Netflix’s most popular original show, ended on a cliffhanger: a protest against the dehumanizing conditions of the for-profit prison that turned into a riot. Season five opens with women of the minimum security prison taking hostages and stays in lockdown, at least through the first half of the new season.

“Season five dutifully tries to stoke that fire in its first half, but just ends up stifling its ambitions with clutter,” writes A.V. Club TV critic Danette Chavez. “The show is successful in building suspense early on; as she holds a gun on the cruel Humphrey (Michael Torpey), it’s anyone’s guess what Daya (Dascha Polanco) will actually do with it. Although OITNB resolves that particular standoff sooner than later, the uncertainty lingers, and the protest-turned-riot becomes the framing device for at least the first six episodes.”

Emma Watson and Dan Stevens are Beauty and the Beast in Disney’s lavish live-action remake of their animated musical from filmmaker Bill Condon, no stranger to musicals (he adapted Chicago and directed Dreamgirls) or to big-budget fantasy spectacle (the final films in the Twilight saga) (PG). Also on DVD and Blu-ray and at Redbox.

A United Kingdom dramatizes the true story of the Botswana chieftain (David Oyelowo) who married a white British woman (Rosamund Pike), creating political and diplomatic turmoil in the 1950s (PG-13).

Also new: the surreal thriller A Cure for Wellness with Dane DeHaan and Jason Isaacs (R), British drama The Sense of an Ending with Jim Broadbent and Charlotte Rampling (PG-13), and Danish World War II drama Land Of Mine (R, with subtitles).

True stories: Finding Kim follows the transition of a Seattle transgender man, In the Steps of Trisha Brown profiles the work of the groundbreaking ballet choreographer, and A Good American explores a revolutionary codebreaking tool (all not rated).

Available same day as select theaters nationwide is Band Aid, a comedy with Zoe Lister-Jones and Adam Pally as married couple who start a band as a form of therapy (not rated), and the high school sports drama Miles with Tim Boardman and Molly Shannon (not rated)

Kid stuff: Trolls (2016), the animated comedy inspired by the line of dolls, features the voices of Anna Kendrick and Justin Timberlake (PG).

More streaming TV: TURN: Washington’s Spies: Season 3 (2016) arrives as the fourth and final season begins on AMC and Netflix picks up the romantic fantasy My Only Love Song: Season 1 from South Korea (subtitled).

I Am Not Your Negro (2016), a portrait of the life and career of James Baldwin, earned an Oscar nomination for Best Documentary (PG-13).

The six-part series Le Mans: Racing is Everything goes behind the scenes of the famous 24-hour race.

Kurt Russell leads a crew for one last heist in the comic caper The Art of the Steal (2013), co-starring Matt Dillon and Jay Baruchel (R).

Cult: Birdemic may not be the worst film ever made but its slapdash effects, risible writing, and non-existent performances have made it a cult favorite on the midnight movie circuit. See it with friends (not rated).

Pierce Brosnan is a designer drug entrepreneur in the thriller Urge (2016, R), Richard Gere stars in Arbitrage (2012), a thriller set in the culture of corporate trading and financial misbehavior (R), and Kristen Wiig stars in the comedy Girl Most Likely (2013, PG-13).

The documentary Dumb: The Story of Big Brother Magazine charts the rise and fall of the skateboard counter-culture magazine that gave us MTV’s Jackass (not rated).

You could describe Miike Takashi’s 13 Assassins (Japan, 2010), a remake of a 1963 classic, as a samurai “Dirty Dozen” with wild swordplay action (R, with subtitles). Reviewed on Stream On Demand here.

Streaming TV: the seventh and final season of the TNT crime drama Rizzoli & Isles and Tyrant: Season 3 from FX.

Carl Reiner interviews fellow nonagenarian overachievers Mel Brooks, Dick Van Dyke, Norman Lear, Betty White, and others in the documentary If You’re Not in the Obit, Eat Breakfast (not rated).

Also new: Shakespeare in Love (1998), which won seven Academy Awards (R), and the series finale of The Leftovers, which means you can now stream all three seasons start to finish.

The new original series I’m Dying Up Here delves into the competitive world of stand-up comedians in the 1970s Los Angeles. Michael Angarano, Clark Duke, Andrew Santino, and Ari Graynor play the hopefuls aiming for a spot on The Tonight Show (Dylan Baker” plays Carson). Melissa Leo is a club owner and manager grooming the next generation. New episodes each Sunday.