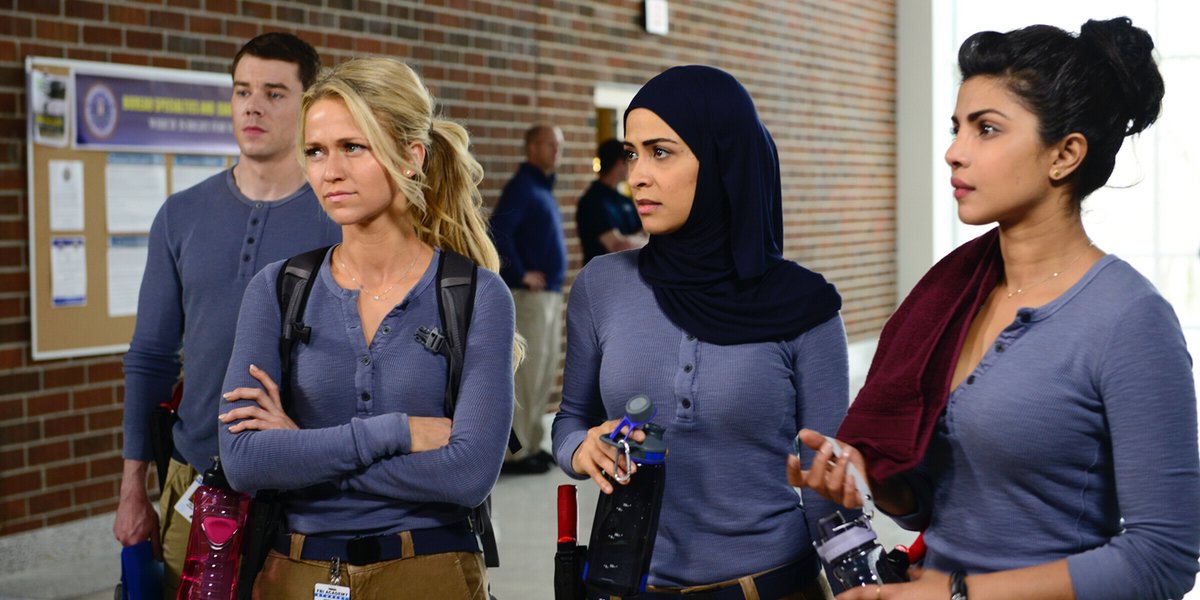 The timing couldn’t be better. We’re in that odd trough between the end of the original summer shows and the launch of the new fall season and, with Quantico returning for its second at the end of September, it gives you plenty of time to catch up or revisit before the new episodes.

American Crime (not to be confused with American Crime Story) is a little different, an anthology series with a regular acting company taking new roles in a different story each season, so there’s nothing to catch up on except an acclaimed show that you may have missed the first time around.

The Nice Guys is throwback to seventies action films and buddy comedies with Russell Crowe as a tough guy for hire and Ryan Gosling as a soused private detective searching for a kidnapped girl. Rated R. Also on DVD and Blu-ray.

The biographical drama The Man Who Knew Infinity stars Dev Patel as real-life visionary mathematician Srinivasa Ramanujan and Jeremy Irons as his mentor. PG-13. Also on DVD and Blu-ray.

Available same day as select theaters nationwide are the thrillers Blood Father with Mel Gibson (R) and The Sea of Trees with Matthew McConaughey and Naomi Watts (PG-13), the relationship comedy The Intervention with Melanie Lynskey and Cobie Smulders (R), and the Norwegian action comedy In Order of Disappearance with Stellan Skarsgard and Bruno Ganz (not rated, with subtitles).

The Netflix original movie XOXO (2016), a millennial romance set at a music festival, stars Sarah Hyland of Modern Family and Graham Phillips of The Good Wife (not rated).

In The Road (2009), based on the end-of-the-world novel by Cormac McCarthy, Viggo Mortensen protects his son after the end of the civilization. Robert Duvall and Charlize Theron co-star. R.

Blue Is the Warmest Color (2013) is the story of two young women in love. The French drama earned an NC-17 rating for its graphic scenes, but it is an intimate and sensitive drama about love, fear, and identity. With subtitles. Reviewed on Stream On Demand here.

From Argentina comes the award-winning dark drama Abzurdah (2015), based on the autobiographical novel by Cielo Latin, and the horror film Necrofobia (2014). Both unrated and in Spanish with English subtitles.

Streaming TV: you can catch up on the procedurals NCIS: Season 13 and Law & Order: Special Victims Unit: Season 17 and the modern fantasy Once Upon a Time: Season 5 before the new seasons begin.

Standup comedy: Jeff Foxworthy and Larry the Cable Guy: We’ve Been Thinking… is a Netflix Original production and the 2015 special Maz Jobrani: I’m Not a Terrorist, But I’ve Played One on TV arrives from Showtime.

Michael Shannon and Kevin Spacey are Elvis & Nixon (2016) in the fictional story of their real-life meeting (R).

The Kicks, a teens-and-tweens drama about a soccer-playing girl adjusting to a new school and a new team, launches its first season.

House of Lies: Season 4 and 5 brings the satirical Showtime series up to date on Amazon Prime.

O.J.: Made in America is a documentary mini-series on the arrest and trial of O.J. Simpson and its reverberations through the culture.

King Georges profiles French chef Georges Perrier as he tries to save his world-renowned restaurant Le Bec-Fin in Philadelphia. Not rated.

The Danish Girl (2015) earned an Oscar for Alicia Vikander as painter Gerda Wegener and a nomination for Eddie Redmayne as Einar Wegener, who underwent experimental sex reassignment surgery in 1930s Denmark (R).

Point Break (2015) is a pointless remake of the nineties action film about a gang of extreme sports adrenaline junkies who rob banks for kicks (PG-13).l