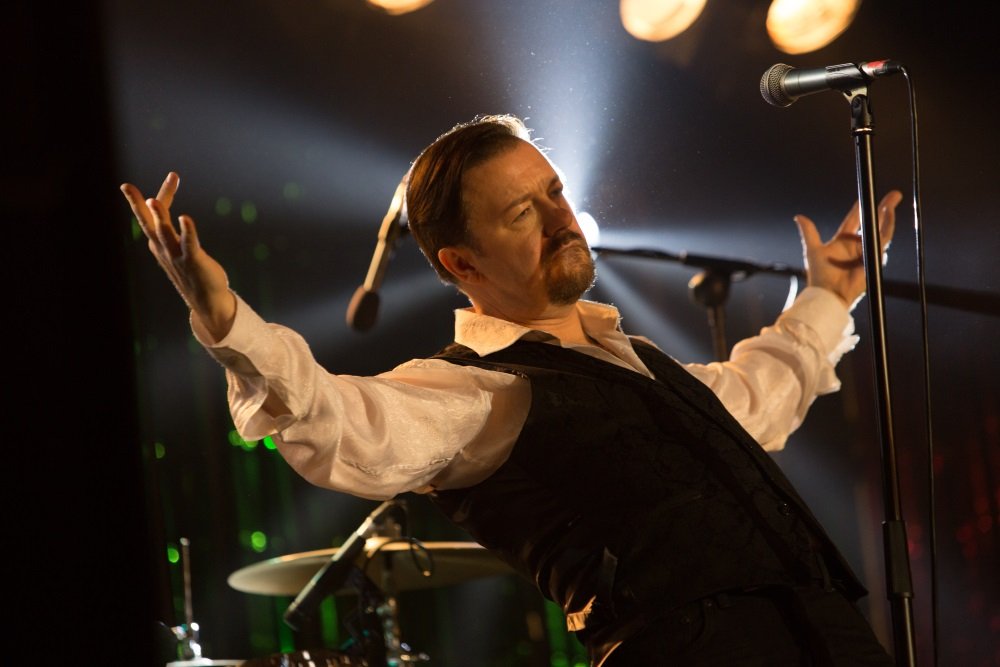 15 years after the end of the original British comedy series The Office, Ricky Gervais checks back in on insufferably self-satisfied office manager David as he tries to launch a career as a singer-songwriter in David Brent: Life on the Road.

“Brent hasn’t changed much except that he’s older and more insecure than he was 16 years ago. But the world has changed, and it’s a much crueler place for a walking social disaster like him,” writes Los Angeles Times TV critic Lorraine Ali. “And yes, it’s as painfully awkward and embarrassing as it all sounds.”

The 98-minute feature was released to theaters in the U.K. and Australia in the summer of 2016 and makes its U.S. debut on Netflix.

Netflix also has the complete run of the superior original The Office.

Ruth Negga earned an Oscar nomination playing Mildred Loving in Loving, a sensitive and moving portrait of Richard and Mildred Loving. Their interracial marriage in segregated Virginia began a legal battle that went to the Supreme Court but Jeff Nichols’ film focuses on the tender relationship at the center of the story. Joel Edgerton costars as Richard (PG-13). Reviewed on Stream On Demand here.

The documentary The Eagle Huntress follows a 13-year-old Mongolian girl who takes up a traditionally male competition with the support of her family (G).

Also new: the animated comedy Trolls inspired by the line of dolls (PG), the dysfunctional family comedy Almost Christmas with Kimberly Elise, Omar Epps, and Danny Glover (PG-13), and the drama American Pastoral based on the Philip Roth novel and directed by Ewan McGregor, who stars with Jennifer Connelly and Dakota Fanning.

The Netflix Original Special Michael Bolton’s Big, Sexy Valentine’s Day Special features new songs from Michael Bolton and a big cast of guest stars (Andy Samberg, Sarah Silverman, Will Forte, Maya Rudolph, Fred Armisen, Janeane Garofalo, Kenny G, and more) but it is less variety show or concert special than comedy spoof. It is, after all, from the creators of Lonely Island and Comedy Bang! Bang!

Streaming TV: The eight-episode documentary series Abstract: The Art of Design looks at creators and their approaches to everything from shoes to cars to magazine covers.

Kid stuff: the Australian series H20: Just Add Water: Seasons 1-3 follows the adventures of three teenage girls who transform into mermaids whenever they come into contact with water.

More movies: Alexander: The Ultimate Cut (2014) presents a longer, extended version of the Oliver Stone epic (not rated), Tom Cruise goes to Japan and becomes The Last Samurai (2003, R), and Irwin Allen takes us on a very unscientific Voyage to the Bottom of the Sea (1961) with Walter Pigeon, Peter Lorre, Barbara Eden, and Frankie Avalon (PG).

Foreign affairs: Call of Heroes (2016) presents old-school Hong Kong costume drama and martial arts action (PG-13), Margherita Buy stars in the Italian romantic comedy Me, Myself and Her (2015, not rated), from Sweden comes the young adult drama Girls Lost (2015, not rated), and from Mexico comes Elvira, I Will Give You My Life but I’m Using It (2014, not rated). All with subtitles.

True stories: Metallica: Some Kind of Monster (2004) is a making-of-the-record documentary that takes an unexpected turn when the group turns to a therapist to work through conflicts (not rated).

Amazon teams up with BBC and French TV for The Collection: Season 1, a drama centered on two brothers (Richard Coyle and Tom Riley) who clash as they rebuild their family fashion house in Paris after World War II. 10 episodes.

Stanley Kubrick kept his first feature Fear and Desire (1953) from being shown for decades. It’s not terrible, mind you, but the overly allegorical war drama is very much a first work. Future filmmaker Paul Mazursky has a small role (not rated).

Streaming TV: The Americans: Season 4 takes the superb FX series about two deep cover Russian agents (Keri Russell and Matthew Rhys) into even more conflicted territory as their American-born daughter comes to grips with the truth about their life. The fifth season begins on FX in March.

True stories: A Year in Port (2016), the latest of the “Year in” wine documentaries, looks at the culture around the hearty Portuguese spirit (not rated) and Doomed! The Untold Story of Roger Corman’s The Fantastic Four (2016) explores the story behind the infamous low-budget superhero movie that was completed and suppressed in 1994 and has still never been released (not rated).

A Separation (Iran, 2011) was the first Iranian film to win an Oscar. Filmmaker Asghar Farhadi’s new film The Salesman is up for an Oscar this year but he will not attend in protest of the travel ban (PG-13, with subtitles).

You can stream both seasons of the French espionage TV series The Bureau, starring Mathieu Kassovitz as a deep cover agent compromised when he breaks with protocol. 20 episodes, with subtitles. The first season reviewed on Stream On Demand here.