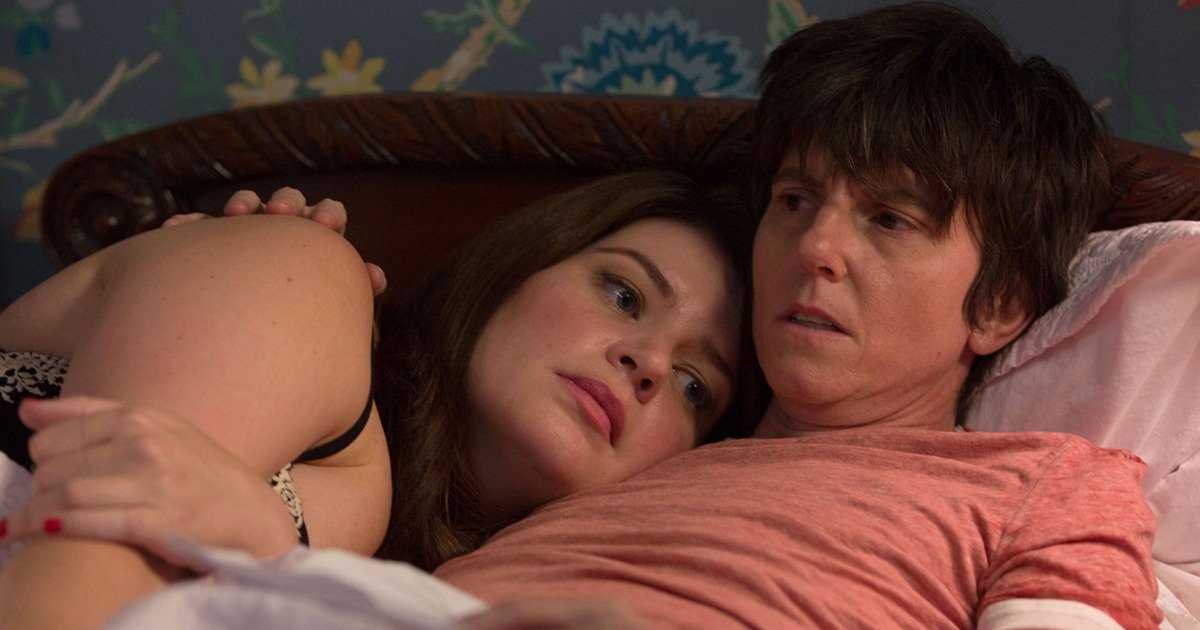 Tig Notaro is an LA radio personality who returns home to see her dying mother in One Mississippi, a semi-autobiographical series she created with Oscar-winning writer Diablo Cody and producer Louis C.K. A comedian with a sardonic sense of humor, Notaro survived cancer, a double mastectomy, and the death of her mother a few years back and she mined her ordeal into bracing comedy. Now she draws from it for a half hour comedy for Amazon Prime. “A highly addictive and deeply affecting series,” says Los Angeles Times TV critic Mary McNamara.

“Spiky, sweet and imperfect in the way emotionally resonant art usually is, One Mississippi moves along the now-familiar track of rueful self-observation/narration — but do not be deceived. Notaro, Cody and director Nicole Holofcener may delve into the theatrical trunks of fugue state and dream sequence but they have a very definite, and painfully universal, story to tell.”

Casey Wilson co-stars as Tig’s girlfriend, Noah Harpster as her brother, and John Rothman as her stepfather.

The six-episode first season is now on Amazon Prime. Add to watchlist.

Money Monster stars George Clooney as a cable financial show host taken hostage on the air by a working class guy (Jack O’Connell) who was wiped out by a bad tip and wants answers. What begins as a critique of Wall Street and the media circus that passes for journalism becomes a familiar drama with the usual villains but Clooney and Julia Roberts (as his sharp producer) are terrific and director Jodie Foster generates tension nicely. The cable pay-per-view rental includes a bonus featurette. Rated R. Reviewed on Stream On Demand here. Also DVD and Blu-ray and at Redbox.

Susan Sarandon is The Meddler in this comedy of a lonely widow who follows her daughter (Rose Byrne) across the country and gets far too involved her life. PG-13. Also on DVD and Blu-ray.

The biographical drama Genius, based on the book by A. Scott Berg, looks at the aften contentious relationship between literary editor Max Perkins (Colin Firth) and author Thomas Wolfe (Jude Law) during the editing of his novels. Nicole Kidman and Laura Linney co-star. PG-13. Also on DVD.

Also new: drama A Bigger Splash with Tilda Swinton and Ralph Fiennes (R), horror film The Darkness with Kevin Bacon and Radha Mitchell (PG-13), Being Charlie from filmmaker Rob Reiner (R), and the documentary The Seventh Fire about the Native American gang crisis (not rated).

Foreign affairs: The Wailing, a thriller from South Korea (not rated, with subtitles), and the action-comedy Compadres from Mexico.

Available same day as select theaters nationwide is Meg Ryan’s directorial debut Ithaca, a family drama with Ryan and Tom Hanks (PG). Also new: the comedy Brother Nature with Taran Killam and Gillian Jacobs (R) and the documentary For the Love of Spock (not rated).

The Finest Hours (2015), inspired by the real-life Coast Guard rescue of oil-tanker crews in during a blizzard in 1952, stars Chris Pine, Casey Affleck, and Ben Foster (PG-13).

Tom Hiddleston and Jeremy Irons star in High-Rise (2015), a near-future thriller of modern living as an alienated madhouse based on the novel by J.G. Ballard (R).

Streaming TV: the complete run of Galavant, a musical parody of romantic medieval adventure tales, and The Blacklist: Season 3 with James Spader as an international villain helping the FBI take down bigger villains.

Streaming TV: Doctor Who: Season 9 with Peter Capaldi as The Doctor and Jenna Coleman in her final season as his companion and the complete first season of the satirical political comedy BrainDead with Mary Elizabeth Winstead and Tony Shalhoub.

The gimmick in Paranormal Activity: The Ghost Dimension (2015), the sixth film in the “found footage” horror franchise, is a camera that can see ghosts (R). Amazon Prime and Hulu.

Forsaken (2015), a western starring Kiefer and Donald Sutherland (R), and new seasons of the shows Inside the NFL and A Season with Florida State Football debut.