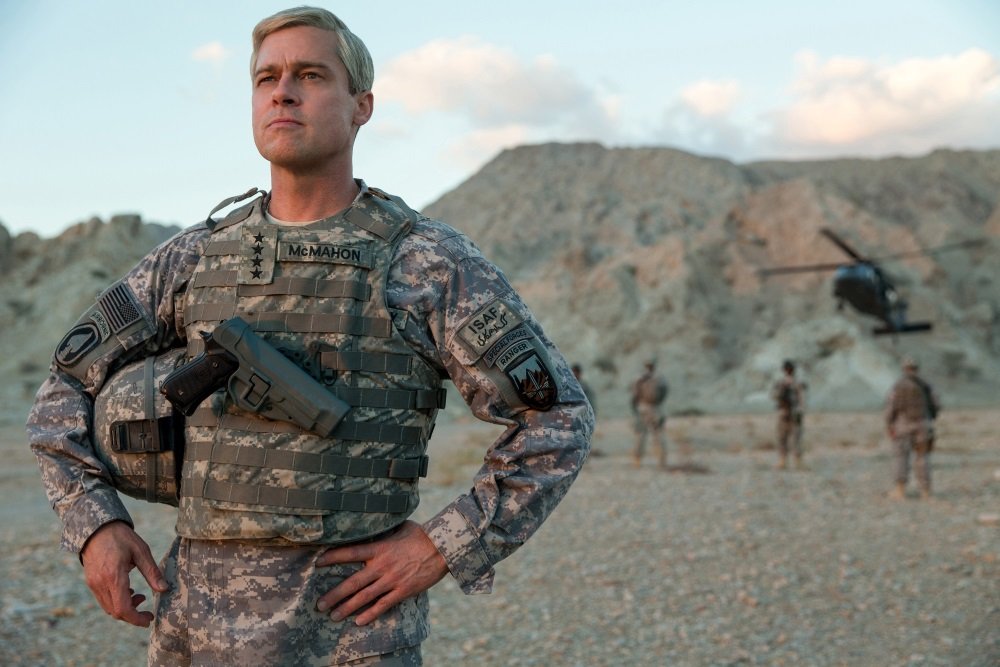 Brad Pitt is an American career officer charged with winding down the war in Afghanistan in the satirical War Machine, a fictionalized version of the non-fiction book by Michael Hastings reworked by Australian director/screenwriter David Michod (Animal Kingdom) as a black comedy of bureaucratic dysfunction and military arrogance.

“At its best, War Machine crackles with irreverent wit, even if American political craziness circa 2009 looks tame compared with the 2017 version,” writes A.O. Scott for The New York Times. “[A]fter a sluggish and chaotic start, War Machine finds its groove and becomes its own thing: a mordant, cleareyed critique of American war-making that is all the more devastating for being affectionately drawn.” For more, read Eric Kohn’s review at IndieWire.

Co-stars Meg Tilly, Anthony Michael Hall, Emory Cohen, Topher Grace, and Scoot McNairy, with appearances by Ben Kingsley and Tilda Swinton. The film, produced by Pitt’s Plan B Entertainment as a Netflix original, is also getting a limited theatrical release.

Logan, starring Hugh Jackman in his final screen appearance as X-Men hero Wolverine, makes shows that superhero movies can tell a human story. This near-future thriller delivers gritty action and ruthless R-rated battles, but at heart it’s about mortality, aging, and what we do for family (R). Reviewed on Stream On Demand here.

Matt Damon joins forces with the soldier of the Emperor in the US-China historical fantasy The Great Wall, which has a novel idea about why the wall was built (PG-13).

Léa Seydoux and Vincent Cassel are Beauty and the Beast (2014) in the lavish French version of the classic fairy tale (PG-13, French and English language versions). Reviewed on Stream On Demand here.

Southpaw (2015) rolls all of the “Rocky” movies into a single film with Jake Gyllenhaal as a hot-headed boxer, Rachel McAdams as the wife that grounds him, and Forest Whitaker as the philosophical trainer who rebuilds him after a tragic fall. There’s not a cliché left untouched but Gyllenhaal is all passion in the role (R).

More foreign affairs: from Japan comes the animated Blame! (2017), a sci-fi thriller in a future where the virtual world is overwriting the physical world, and the surreal (and gory) high school nightmare Tag (2015) from maverick filmmaker Sion Sono (not rated, with subtitles).

The documentary Joshua: Teenager vs. Superpower looks at the Hong Kong high school boy who rallied students to protest the Chinese government when it reneged on its promise to give Hong Kong political autonomy. The Netflix original documentary is also receiving a limited run in theaters (not rated).

More true stories: I Am Jane Doe (2017), about the battle against sex trafficking abetted by Backpage.com, and What’s With Wheat? (2017), which looks dangerous changes in wheat production (both not rated).

Moonlight (2016) is both a poetic and provocative portrait of a young black child, the sensitive, bullied son of a crack-addict single mom in a tough Miami neighborhood, presented through three acts of his life from childhood to adulthood. It earned three Academy Awards including Best Picture (in a now-infamous Oscar moment) and Supporting Actor for Mahershala Ali’s tender performance as a drug dealer who shows the boy compassion and concern (R).

Streaming TV: Boardwalk Empire: Season 5, the final season of the HBO drama about the birth of organized crime in America during Prohibition, now gives Prime members the entire run of the acclaimed series. Reviewed on Stream On Demand here.

True stories: Seasons (2016), which looks at the life cycle of the forest, is a natural history documentary from the team that made “Winged Migration” (PG) and Bonhoeffer (Germany, 2003), about the religious philosopher who fought back against the rise of Nazism in 1930s Germany (not rated, with subtitles).

Tongue-in-cheek comic book movie Teenage Mutant Ninja Turtles: Out of the Shadows (2016) stars Megan Fox, Will Arnett, and the four heroes in a half shell of the title (PG-13).

Documentary and memoir intermingle in Becoming Bond (2017), an entertaining profile of George Lazenby, who played James Bond in On Her Majesty’s Secret Service (one of the best) and then almost disappeared from sight (not rated).

Foreign affairs: I Am Love (Italy, 2010) stars Tilda Swinton as the Russian wife of an Italian industrialist who falls for a young chef with a love of life. Also new: the searing drama The Hunt (Denmark, 2012) with Mads Mikkelson (reviewed on Stream On Demand here) and action thriller District B13 (France, 2006) with eye-popping stunt work (reviewed on Stream On Demand) (all rated R, with subtitles).

Robert De Niro plays Bernie Madoff in The Wizard of Lies, an HBO original feature about the superstar financier whose famed investment fund was a fraudulent Ponzi scheme, with Michelle Pfeiffer and Hank Azaria (not rated).

Twin Peaks (or Twin Peaks: The Return, as many are a calling it) brings David Lynch back to the small screen with most of his original cast for more Pacific Northwest Noir. It is weird and enigmatic and creative and still unlike anything else on TV and Lynch directs every single episode himself. The first four episodes of the eighteen-episode TV event are now available to stream; new episodes arrive each Sunday.

A pair of animated features debut: Waltz With Bashir (2008), an autobiographical tale of memory and repression turned oral history of the Lebanon war (R), and the made-for-TV family film The Point (1971), with songs by Harry Nilsson and narration by Ringo Starr (not rated).

Delicious: Series 1, a British foodie drama about a cheating celebrity chef (Iain Glen) and the two women in his life (Dawn French and Emilia Fox), makes it American debut on the streaming service (4 episodes).