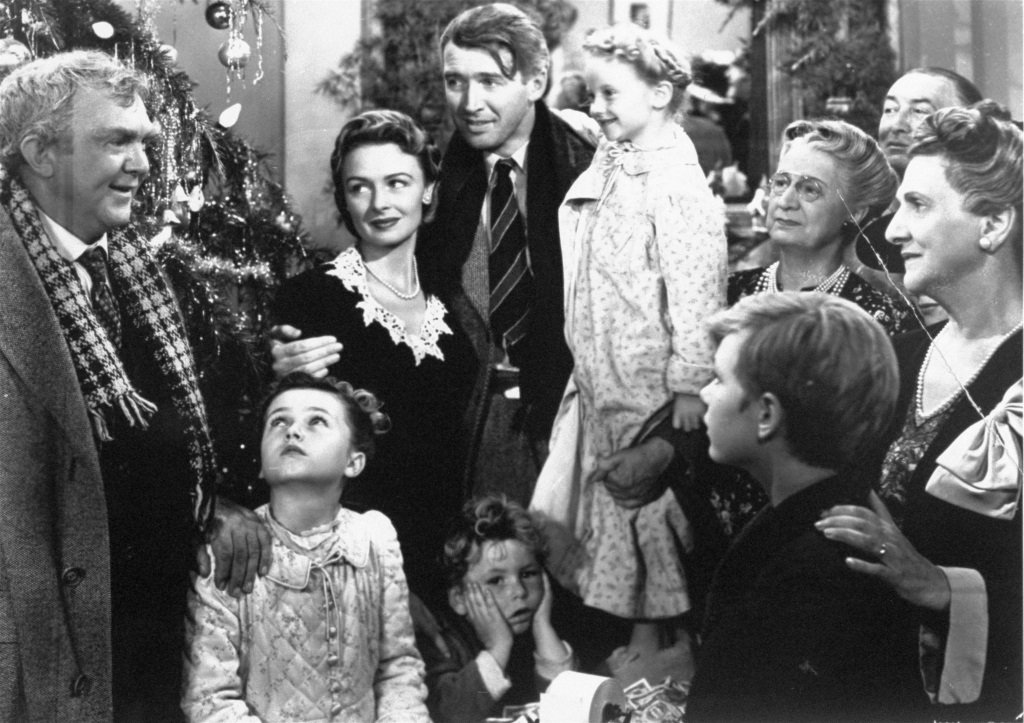 Once upon a time, when the TV networks dominated home entertainment, we waited for the holiday specials and Christmas-themed movies to show up on TV. Now that more folks are streaming their home entertainment, it takes a little more searching to find a holiday treat worth seeing.

There are of course hundreds of holiday possibilities available to rent through video-on-demand but the pickings are leaner when choosing from the primary streaming services and the menus crammed with generic TV movies and cheap animated knock-offs of famous holiday specials. Here’s a list of worthy picks drawn from Netflix, Amazon Prime Video, and Hulu with a little something for everyone, from sentiment to sass, from wonder to weird.

Teacher says every time someone watches It’s a Wonderful Life (1946) an angels gets its wings. Okay, that’s not actually the quote but I stand by the thought. Jimmy Stewart stars as America’s small town everyman facing a crisis of faith in what is at once a most wonderful life affirming picture and a nightmare of small town America gone bad. Would we love the Mecca of holiday films so if it didn’t take a left turn into Americana Babylon? Donna Reed, Lionel Barrymore, Thomas Mitchell, Beulah Bondi, Gloria Grahame, and Henry Travers co-star and Frank Capra directs. Streaming on Amazon Prime Video.

The lavish Technicolor musical White Christmas (1954) stars Bing Crosby and Danny Kaye as song and dance men and Rosemary Clooney and Vera Ellen as a struggling sister act who stage a revue to save a failing Vermont country inn owned by the boys’ beloved former commanding officer (Dean Jagger). This holiday classic is sentimental, contrived and stiffly silly, yet it still charmed its way to become the biggest hit of its year, thanks largely to the Irving Berlin score, big studio production numbers, and the relaxed presence of Crosby, who even calms down the usually hyperactive Kaye. Streaming on Netflix.

The song “White Christmas” was actually introduced in Holiday Inn (1942), starring Bing Crosby as the proprietor of a country inn that is only open for the holiday and Fred Astaire as his hoofer buddy who attempts to lure Crosby’s star attraction and sweetheart (Marjorie Reynolds) away to become his new dance partner. It’s a thin story but a classic musical and a film for all seasons, with a score by Irving Berlin (who also hatched the story). And of course it launched the biggest selling single of all time. On Prime Video.

Love Actually (2003, R), from Britain’s one-man romantic comedy factory Richard Curtis, skips through what seems like dozens of stories over the course of the Christmas holidays, following the romantic travails of everyone from the British Prime Minister (a charming and sweet Hugh Grant) to a love-struck grade school kid. But the film is all but stolen by Bill Nighy as a washed up rock star goofing his way through his holiday TV and radio appearances as his seasonal song climbs the charts. A light holiday treat of romantic hors d’oeuvres. Emma Thompson and Alan Rickman, Colin Firth, Laura Linney, Liam Neeson, Martine McCutcheon, Keira Knightly, and Rowan Atkinson co-star. On Netflix.

The playfully macabre humor of Tim Burton is deftly brought to life through the old-school magic of stop-motion animation by director Henry Selick in the musical The Nightmare Before Christmas (1993, PG). Jack Skellington, the Pumpkin King of Halloween Town, is a childlike ghoul who stumbles upon the joy of Christmas Town and decides to fill Santa’s shoes with his own twisted (but endearingly well-meaning) take on gift giving. It walks that fine line between comedy and macabre while maintaining a sense of wonder and an innocently devilish sense of fun. Streaming on Hulu.

Billy Bob Thornton is perfectly cast in Bad Santa (2003, R) as a foul-mouthed, sex-crazed, child-hating safecracker who plays the rattiest, most misanthropic department store Santa in creation as part of a holiday heist scheme. Terry Zwigoff’s anti-holiday film has it both ways, with the offhandedly contemptuous, ill-mannered, and unpleasant Thornton sliding toward redemption as the most unlikely father figure to a sad-sack only child (Brett Kelly) despite his best efforts and worst instincts. Lauren Graham is both naughty and nice as an easy bartender with a Santa fetish. On Netflix.

Netflix entered the original confectionary Christmas romance follies last year with A Christmas Prince (2017) and Christmas Inheritance (2017). They were surprise hits so this year it gave us another royal romantic fantasy, The Princess Switch (2018) with Vanessa Hudgens as both a Chicago baker and a soon-to-be princess (with a terrible British accent) who swap identities, and the sequel A Christmas Prince: The Royal Wedding (2018) with Rose McIver, plus the romantic drama The Holiday Calendar with The Vampire Diaries” star Kat Graham and the family-oriented Free Rein: The Twelve Neighs of Christmas (2018). My tastes lean more toward The Christmas Chronicles (2018, not rated), an adventure fantasy with Kurt Russell as Santa Claus on the search for a missing sleigh with two urban siblings. No romance but plenty of sentiment. All are rated TV-PG. On Netflix.

The most unusual, eccentric, and unbelievable Christmas songs ever released are celebrated in Jingle Bell Rocks! (2014, not rated). Christmas music aficionado Mitchell Kezin celebrates forgotten greats (Nat King Cole’s devastating “The Little Boy that Santa Claus Forgot,” the director’s favorite song), alternative takes with a cultural spin, novelty numbers, and unexpected discoveries. This is a musical road trip guided by an obsessive who just wants to share is affection for a genre of music that is maligned by many, tolerated by some, and embraced by a few obsessive fans. John Waters, Dr. Demento, and Joseph Simmons of Run DMC join the celebration. On Hulu.

For a little variety:

Bill Murray is your host for A Very Murray Christmas (2015, not rated), created by Murray for Netflix with filmmaker Sofia Coppola. The humor is tamped down in this intimate little gathering as Murray tries to host a grand TV special at the Carlyle Hotel when a snowstorm knocks the power out. With a guest list that includes George Clooney, Chris Rock, Miley Cyrus, and Amy Poehler, Murray and friends sing classic carols and a few well-chosen contemporary tunes. It’s low key and rather sweet. On Netflix.

For a dark Christmas binge:

A little too much holiday cheer in your Christmas viewing? Happy!: Season 1 (2018, TV-MA), a mix of crime thriller, dark comedy, and holiday fantasy, stars Christopher Meloni as a suicidal ex-cop searching for his kidnapped daughter with a tiny, flying, blue unicorn (voiced by Patton Oswalt). This is a show where a mad Santa kidnaps children and wraps them up as life-size dolls and their best hope is an alcoholic underworld hitman for hire. The blood spatters across the screen in the first 60 seconds, letting you know that this is clearly this not a holiday cocktail for everyone, especially kids (despite the candy-colored cartoon unicorn flitting through the mayhem). Originally made for SyFy, it’s now streaming on Netflix.

For something really, really different:

Rare Exports: A Christmas Tale (Finland, 2010, R, with subtitles) may come from the land of the original Father Christmas but this wild Santa Claus is a child-snatching demon who punishes the naughty with the help of his army of naked, scraggly old men elves: the Father Christmases of the wild. You could say it’s a black comedy but writer/director Jalmari Helander directs it like a surreal action thriller in the isolated frozen north, playing deadpan tension and horror thriller situations for dark humor and putting a tow-headed little kid taking charge like an action hero with entrepreneurial spirit. On Hulu.