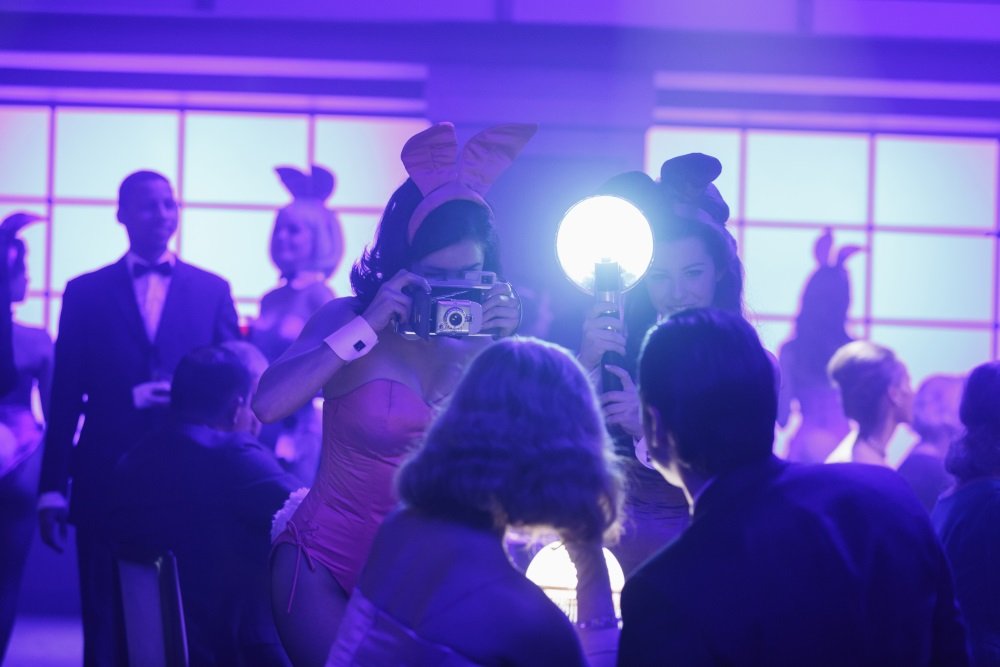 Amazon Prime presents the original documentary series American Playboy: The Hugh Hefner Story, which profiles the man, the brand, and the lifestyle he advocated through his magazine and his clubs with a mix of documentary and dramatic recreation.

“If not quite a hagiography, it is very much an official document — “my story, or at least how I remember it” — made with the participation of friends and family members and Playboy insiders young and old, all of whom feel obvious affection for the man, his magazine and his mission. This is evidently how Hef wants you to remember him,” writes Los Angeles Times TV critic Robert Lloyd. “And given that American Playboy is filled out, as with Bondo, by passages of dramatic re-creation, the series might easily be half its length, and twice as effective…. dramatic scenes, often without dialogue, lack depth and as often as not come off as corny.”

Felicity Jones is a scruffy survivor who becomes an unlikely hero in Rogue One: A Star Wars Story, taking on the Empire with a team of outcasts and mavericks. This action packed mission thriller plays out in the margins of “Star Wars” with a darker portrait of rebellion and war (PG-13). Reviewed on Stream On Demand here.

Available same day as select theaters nationwide is the romantic drama The Ticket with Dan Stevens as a blind man who regains his vision and loses his way (not rated). Also new: Werner Herzog’s thriller Salt and Fire with Michael Shannon and Gael García Bernal (not rated), the comedy Speech & Debate based on the off-Broadway play (not rated), and Aftermath with Arnold Schwarzenegger (R).

Steven Spielberg’s The BFG (2016), based on Roald Dahl’s storybook fantasy of an orphaned girl and a big friendly giant (Mark Rylance), has a sense of wonder and a playfully childish sense of humor (PG). Reviewed on Stream On Demand here.

The award-winning documentary Tower (2016) uses animation and dramatic recreations to explore the terror of Charles Whitman’s shooting spree in 1966 (not rated).

Foreign affairs: the drama The Lighthouse of the Orcas (2016) sends Maribel Verdú from Spain to Argentina for her son and comedy The Tenth Man (2016) travels from New York to Argentina for a family reunion (both subtitled and not rated).

The new month brings a new slate of older movies and TV shows. Here are few highlights newly added to the streaming library:

The Love Witch (2016) pays tribute to 1960s Technicolor romances and European horror films with a supernatural story about a passionate witch (Samantha Robinson) whose love potions keep killing her lovers (not rated).

Streaming TV: the British family comic-drama The Durrells in Corfu: Season 1 follows a widow and her four kids to a new life in Greece in the 1930s. Reviewed on Stream On Demand here.

Rockumentary: Scott Walker: 30th Century Man (2009), a profile of the enigmatic musical genius (not rated), and the concert film Who Took the Bomp? Le Tigre on Tour (2011).

Older films cycling through Amazon Prime and Hulu libraries include:

Dominic Cooper is a reformed crook turned small-town Preacher in the debut season of the AMC series about angels, demons, miracles, and the existence of God. This is another comic book series with a gritty edge of violence, blood, and the grotesque. 10 unrated episodes featuring material censored in its AMC run. Reviewed on Stream On Demand here.

Older titles added to the streaming library include:

True stories: Abortion: Stories Women Tell talks to women on both sides of the contentious issue and Saving My Tomorrow Part 5 continues the documentary series on the environment from the perspective of today’s children (not rated).

The seventh and final episode of the mini-series Big Little Lies is now streaming.

The documentary The Beach Boys: Making Pet Sounds (2017) celebrated the 50th anniversary of the making of the landmark album.

Older titles cycling through the library include the family drama People Like Us (2012) with Chris Pine and Elizabeth Banks (PG-13) and the zombie comedy Shaun of the Dead (2004) with Simon Pegg (R).

“The Chaos of Cool: A Tribute to Seijun Suzuki” is a seven-film collection from the mad maverick filmmaker’s astounding 1960s run of genre pictures, including his surreal masterpieces Tokyo Drifter (1966) and Branded to Kill (1967). Includes supplements.

Blake Edwards and Peter Sellers made The Party (1968) in the manner that Chaplin and Keaton made their great silent comedy shorts: take a situation and a set and explore the comic possibilities. Reviewed on Stream On Demand here.

Holy Rollers (2010) stars Jesse Eisenberg as a Jewish teenager from an Orthodox community who created an Ecstasy smuggling ring (R).

Gael García Bernal and Michelle Williams star in Lukas Moodysson’s romantic drama Mammoth (2009), which leaps from New York to Thailand and back (not rated).