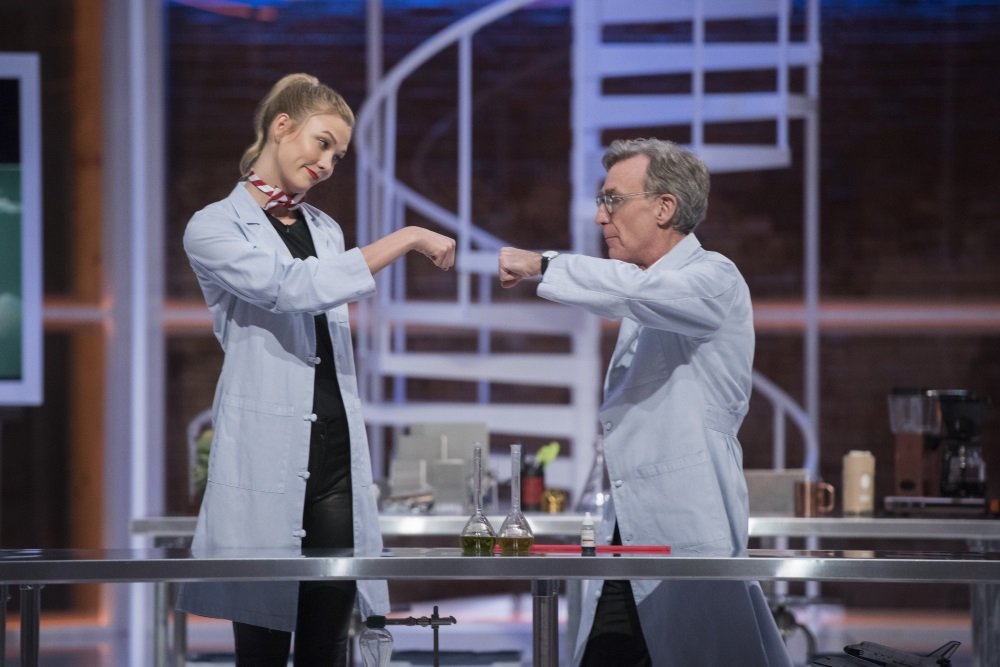 “The new series is pitched primarily toward adults, casting the bow-tie-wearing Nye as an advocate and science warrior, trying to beat back the anti-scientific thought and quackery that’s prevalent, especially within the political sphere,” writes TV critic Brian Lowry for CNN. “If it’s not quite a rescue mission, Nye appears to have taken to heart the concept of trying to provide a small beacon of light rather than just cursing the darkness.”

James McAvoy is a kidnapper with multiple personalities in M. Night Shyamalan’s Split and Anya Taylor Joy (of the indie horror hit The Witch) is the resourceful prisoner trying to navigate the personalities to escape (PG-13).

The Founder dramatizes the story of how travelling salesman Ray Kroc (Michael Keaton) transformed McDonald’s into a billion-dollar franchise (PG-13).

On VOD before disc: drama The Levelling with Ellie Kendrick and Jack Holden (R), action thriller Isolation with Dominic Purcell (R), and sci-fi-inflected horror film The Dark Tapes (not rated).

Hugh Jackman and Christian Bale are journeyman magic assistants in Victorian era London who become rivals as they rise to fame as magicians in their own right in Christopher Nolan’s devious The Prestige (2006). Jackman is the fame-hungry showman and Bale is the consummate professional and purist out to create the perfect trick. Christopher Nolan directs with his trademark narrative shuffling, moving back and forth through their lives to find the roots of the obsessive competition turned fatal rivalry. Michael Caine is the engineer who helps concoct the devices, Scarlett Johansson a sexy assistant turned spy, and David Bowie plays real-life inventor and visionary Nikola Tesla (PG-13).

Slam (Italy, 2016) is an Italian comedy about a teenage skateboarder facing life-changing events from the novel by Nick Hornby (not rated, with subtitles) and Nazis invade Britain in Resistance (2011), an alternate-reality World War II thriller with Michael Sheen (not rated)

Also new: the Iraq war drama Sand Castle (2017) with Henry Cavill and Nicholas Hoult (not rated), romantic comedy Tramps (2016) from the director of Gimme the Loot (not rated), inspirational drama A Street Cat Named Bob (2016) from the best-selling book by James Bowen (not rated), and romantic drama Manglehorn (2014) with Al Pacino and Holly Hunter (PG-13).

Streaming TV: The Netflix original shows Girlboss, a rags-to-riches comedy series starring Britt Robertson as a self-made fashion mogul, and Hot Girls Wanted: Turned On, a documentary series exploring the effects of internet pornography and social media on our culture, both debut this weekend.

More streaming TV: Tales by Light: Season 2, an Australian production about photographers and photography, and the animated The Mr. Peabody & Sherman Show: Season 4 for kids.

Ewan McGregor directs and stars in American Pastoral (2016), based on the Philip Roth novel (R).

Rooney Mara and Casey Affleck are an outlaw couple in Ain’t Them Bodies Saints (2013), a powerful and poetic drama from director David Lowery (R). Reviewed on Stream On Demand here.

Still trying to save the future in 12 Monkeys: Season 2, the Syfy channel time travel drama.

The bad guys take the lead in Suicide Squad (2016) a darker, nastier DC anti-superhero movie with Will Smith, Margot Robbie, and Jared Leto as The Joker (PG-13 and extended unrated versions). Reviewed on Stream On Demand here.

The provocative coming-of-age drama Indignation (2016) is adapted from the Philip Roth novel (R). Reviewed on Stream On Demand here.

A new season of the Emmy-winning comedy Veep and the final season of the heady drama The Leftovers are now underway. New episodes arrive Sundays.

Guerilla, a mini-series set in the radical political underground of 1970s London, is written and directed by Oscar-winner and Emmy-nominee John Ridley and stars Idris Elba and Freida Pinto. New episodes debut each Sunday.

Lars von Trier’s Antichrist (2009) arrives on the Channel with the complete supplements from the edition, including several behind-the-scenes videos and a documentary on the film’s now-legendary premiere at Cannes (not rated, explicit imagery).

Aki Kaurismäki presents Finland’s maddest bar band. Americans discovered Leningrad Cowboys in the deadpan rock and roll road movie comedy Leningrad Cowboys Go America (Finland, 1989) and in the sequel, Leningrad Cowboys Meet Moses (Finland, 1994), but if you’re not ready for a feature, check out his surreal music videos for the band: Rocky VI (1986), L.A. Woman (1987), Thru the Wire (1987), Those Were the Days (1992), and These Boots (1993). None of these are rated.

Andrew Bujalski directs Beeswax (2009), a comedy of two somewhat flaky adult sisters trying to find their way in the world (not rated).