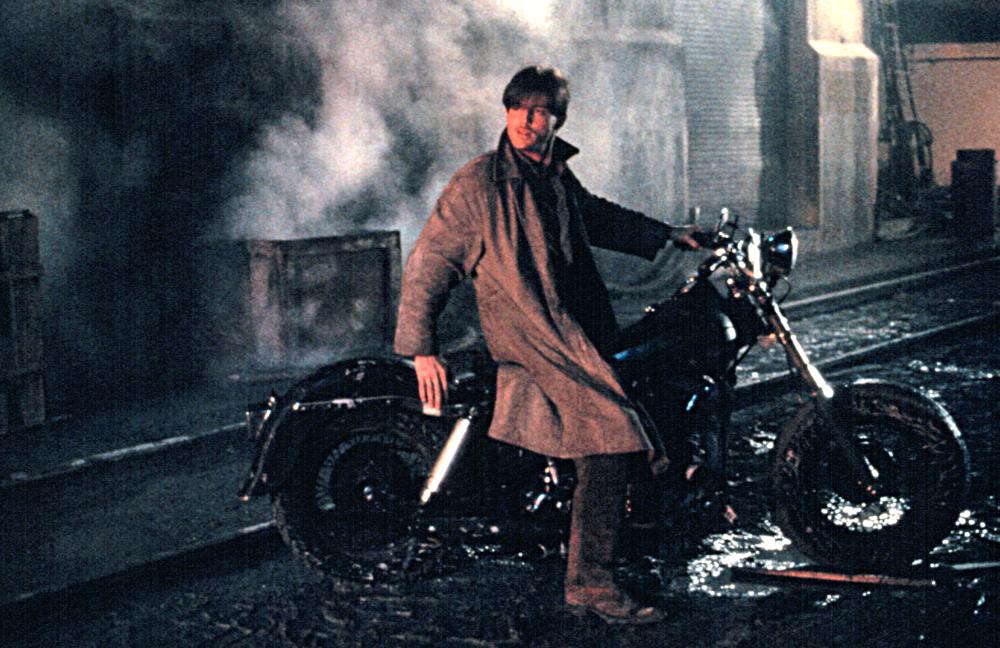 A self-described “A Rock and Roll Fable” from “another time, another place,” I think of Walter Hill’s Streets of Fire (1984) as a rock and roll western dropped into the urban badlands of a brick and neon noir. It opens on what appears to be the 1950s frozen in time, a working class neighborhood forgotten in the explosion of the post-war American big city dreams. It could be Chicago (where some of the film was shot) or New York or any city, really, a film noir in comic book color, and it’s where former soldier turned shaggy soldier of fortune Tom Cody (Michael Paré) returns to play reluctant hero.

Diane Lane is Ellen Aim, the local girl turned rock and roll star returning to the old music palace for a hometown show and Willem Dafoe is Raven, the lizard-faced leader of the local biker gang who rumbles in to kidnap Ellen. It’s all set to the beat of a Jim Steinman rock anthem belted out by Ellen Aim and the Attackers and supercharged by jagged wipes, driving cuts, and a restless camera that sweeps along with the swirl of constant movement. It is action cinema as pulp mythology and it is exhilarating. Between the songs, a guitar rock score by Ry Cooder keeps the beat.

Called to the rescue by his sister (Deborah Van Valkenburgh), Tom takes a sidekick, a fellow former soldier named McCoy (Amy Madigan) who knows how to handle herself, and a scout, Ellen’s manager and boyfriend Billy Fish (Rick Moranis), and sets out for the lawless warehouse district, the urban answer to the western badlands.

Streets of Fire came out of the success (and the urban crime movie edge) of 48 Hrs and the DNA of The Warriors, this time channeling fifties motorcycle movies and western raid-and-rescue adventures. And while some shots were grabbed on location, most of the film was shot on the backlot where Hill and his team were able to turn the New York street set into the archetypal film noir city. I think of this as the bones of the city that Blade Runner was built over.

Hill has always had a passion for archetype and myth as reworked through the American genre idiom and Streets of Fire is probably the purest, most distilled expression. Paré’s Tom Cody has a name and a look right out of a western and Lane’s Ellen has the style of a film noir femme fatale and the tough assurance of a Howard Hawks heroine. Dafoe has a goblin smile as Raven—he looks downright alien in his first major studio part—and a fashion sense to match (what is with those latex overalls?). And Madigan plays McCoy, a part written as male, without anything more than lip service to the gender switch. She’s a professional who steps up as a warrior as if born to it, a bounty hunter on the urban frontier. And the final battle? Not guns or fists, no. It’s personal, mano-a-mano with rail-driving hammers (again, how frontier).

There’s no pretense of realism. This is Hill’s urban western as hoodlum Oz populated with pure pulp characters and driven by style and attitude and love of genre. That love is contagious.

Also on Blu-ray and DVD and on SVOD through Amazon Video, iTunes, GooglePlay, Fandango, Vudu and/or other services. Availability may vary by service.
Streets Of Fire [Collector’s Edition] [Blu-ray]

Shout! Factory’s Blu-ray is a two-disc special edition from a new 2K scan of the interpositive. It’s a great-looking disc that brings out the vivid textures of the neon and grunge color and production design but still preserves the hallmarks of a movie shot on actual film. The Blu-ray debut provides a bonus disc with not one but two feature-length documentaries: “Hotguns and Six Strings: The Making of a Rock and Roll Fable,” produced exclusively for this release and featuring interviews with director Hill, producer Lawrence Gordon, co-screenwriter Larry Gross, actors Michael Paré and Deborah Van Valkenburgh, and many other members of the cast and crew (100 minutes), and “Rumble on the Lot: Walter Hill’s Streets of Fire Revisited” with Hill, actors Paré and Amy Madigan, and art director James Allen, produced for the British home video release of the film (82 mins).

Carried over from the earlier DVD are five vintage featurettes, music videos, an animated still gallery, and trailers and promos.