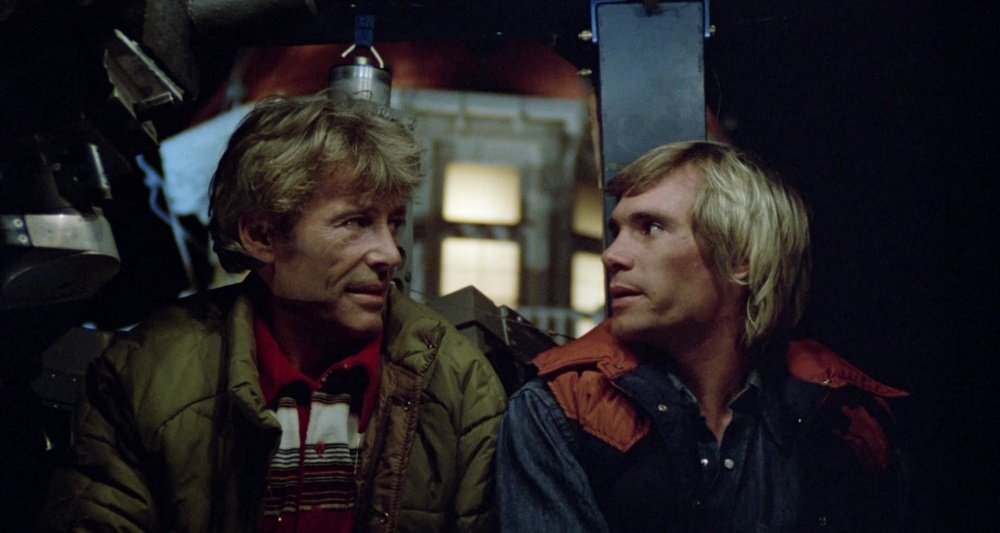 Steve Railsback is intense and haunted as the Vietnam vet on the run from his ghosts as much as from some mysterious crime who winds up sheltered by megalomaniac movie director Peter O’Toole and hired as the film’s new stunt man. As he falls in love with leading lady Barbara Hershey and tries to understand the alternately charismatic, sincere, manipulative, monstrous, and mysterious movie director, he loses the ability to tell what’s really happening behind the artifice and performance and finally becomes convinced they are out to kill him. The film twists and turns from scene to scene, carrying the audience on the some whirlwind mind-game as Railsback navigates the maze of assumption and appearances.

It’s one of the great movies about the movies and a devious exploration of trust in the line between art and life. Adam Rourke (who starred in Rush’s 1960s biker pictures) is the sardonic movie star that Railsback doubles, Alex Rocco the local cop, and Allen Goortwitz (aka Allen Garfield) is marvelous as the nervous screenwriter with moments of genius, but the unheralded class act of the supporting cast is Chuck Bail, the real life stunt coordinator and second unit director turned actor. His stories and experiences helped color the picture and his easy-going performance as the stunt coordinator of the film within a film is natural, warm and confident.

It was nominated for three Academy Awards, for director Rush, actor O’Toole, and screenwriters Rush and Lawrence B. Marcus, and O’Toole won the best actor awards from the New York Film Critics Circle.

,  iTunes, GooglePlay and/or other services. Availability may vary by service.
The Stunt Man [Blu-ray]

The Blu-ray debut from Severin includes four original interview featurettes along with the superb supplements from the earlier Anchor Bay special edition DVD. New to this release is the half-hour interview featurette/career retrospective “The Maverick Career of Richard Rush” and three shorter interview featurettes: “Peter O’Toole Recounts The Stunt Man,” “Devil’s Squadron: An Interview with Steve Railsback and Alex Rocco” and “Barbara Hershey on Nina Franklin,” all offering substantial discussions of the film and the filmmaking. “The Stunt Man at The New Beverly” is a video recording of Rush, Railsback and Hershey at a post-screening Q&A and there are two deleted scenes.

From the previous DVD special edition release from Anchor Bay comes a packed commentary track by director/producer/co-writer Richard Rush with stars Steve Railsback, Barbara Hershey, Alex Rocco and Chuck Bail, supplemented with comments by Rush and Peter O’Toole (from a separate recording) and Sharon Farrell (interviewed separately. The best stories, by the way, come from Bail, who discusses stunts (both real and fictional) and his relationship with Rush.

But the supplement highlight is the 2001 original documentary The Sinister Saga of Making The Stunt Man, Richard Rush’s first person exploration of the making and the meaning of his most famous film. A fascinating change from the usual “objective” documentary, this passionate portrait of a labor of love is also an enlightening look realpolitik studio dealings, double crosses, and sabotage. Shot on video and shot through with ragged but effective video tricks, it’s an inventive and riveting contrast to the usual objective “making of” supplements, and it stand on its own as a creative expression of art in the world of commerce.