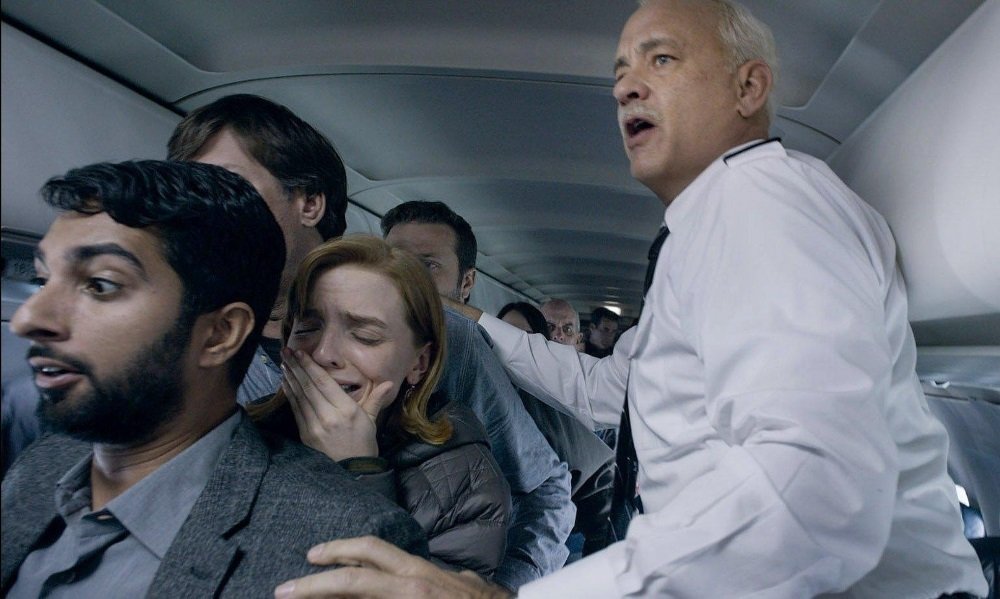 Sully (2016) is a fittingly modest nickname for an unassuming career airline pilot who became an American hero in 2009. Chesley “Sully” Sullenberger was piloting a routine flight from LaGuardia when his Airbus airliner was disabled over New York City mere minutes after take-off and he ditched in a water landing in the Hudson River with no loss of life.

That’s the story most people know, the Miracle on the Hudson as it was so anointed by the media, and it would be the climax of your standard cinematic treatments of the true story, with Sully heroically defying orders to turn back to LaGuardia on nothing but gut instinct. But Sully plays out a week after the incident as Sully (Tom Hanks under snowy, thinning hair and trim mustache) and his co-pilot Skiles (Aaron Eckhart) undergo the third degree from the National Transportation Safety Board (NTSB). The investigating team questions his decision, based on their data and computer simulations, and a ruling of pilot error would effectively end his career and cost him his pension.

So the stakes are personal for Sully, but it’s not just his livelihood. It’s his life, his dignity, his very identity. Sully is a professional whose “gut decision” was informed by 40-plus years of flying experience; he can feel that his craft is crippled beyond the point suggested by panel readings, and the weight of his responsibility (the lives of 155 souls on his flight) means he can’t get it wrong. The alternative plays out in his PTSD-tinged nightmares, failed replays where the plane crashes the heart of NYC, a haunting collision that can’t help but evoke September 11. Hanks plays Sully with the kind of bedrock decency and sincere modesty that he does better than anyone on screen today. He’s as uncomfortable being feted by the public as he is being grilled by an aggressive panel of investigators who seem to have already made up their minds. (The board’s unrestrained antagonism is the film’s major weakness, a contrivance to generate dramatic conflict, but even that is alleviated by the third act.) His cell phone lifeline to his wife Lorraine (Laura Linney) across the country serves to remind us of his disconnection, his life on hold while the city celebrates him as a hero and the NTSB threatens to brand him a villain.

It’s interesting to read the initial reviews, mostly positive, a few glowing, but a number of them critical of Eastwood’s seemingly simple equation of Sully defending his actions as a defense of his honor. It was accused of hagiography, of a libertarian streak of mistrust of institutional oversight, of being another film about an old white guy persecuted for his courage. And if you view it through that lens it may be all you see. I see an unconventional drama—the entire flight, from lift-off to water landing, lasted only a few minutes and Eastwood replays it three times through the course of the time-slipping film to give the audience a different perspective and, more importantly, a different experience—told in an old-school, unassuming manner. Eastwood uses the state of the art effects to create something real and immersive experienced from within rather than observed as spectacle, and the contrast with the flight simulator recreations only enhances the visceral immediacy of the flashbacks.

Eastwood is in Sully’s corner but despite the title, Sully is ultimately about everyone involved in saving the passengers of U.S. Airways Flight 1549: the flight attendants who prepped the passengers and guided them calmly but firmly to the emergency exits, the rescue divers who fished passengers out of the freezing waters, the ferry captains who turned their boats to the floundering aircraft and the crews that methodically pulled the passengers to safety. This is the Eastwood aesthetic: professionals doing their jobs without fuss or debate. They don’t have much dimension—Sully is the only fully-developed character on screen—but the actors, like the figures they play, get the job done. Sully clocks in at a trim 96 minutes and moves at a measured pace that takes in the details of how things work. There’s no rousing fanfare to the common man as hero and, finally, there are no real villains, just the simple dignity of people rising to the occasion in a superbly-crafted, crisply-directed film. Those are American values I can respect.

Watch it on HBO Now

and other services. Availability may vary by service.
Sully [DVD]

The Blu-ray and DVD offers three featurettes. “Sully Sullenberger: The Man Behind the Miracle” and “Moment by Moment: Averting Disaster on the Hudson” tell the story of the event behind the movie and the people behind the characters with Captain Sullenberger, co-pilot Jeff Skiles, air traffic controller Patrick Harris, and Lorrie Sullenberger. “Neck Deep in the Hudson: Shooting Sully” is a 20-minute behind-the-scenes production featurette. The Blu-ray also includes bonus DVD and Ultraviolet Digital HD copies of the film.