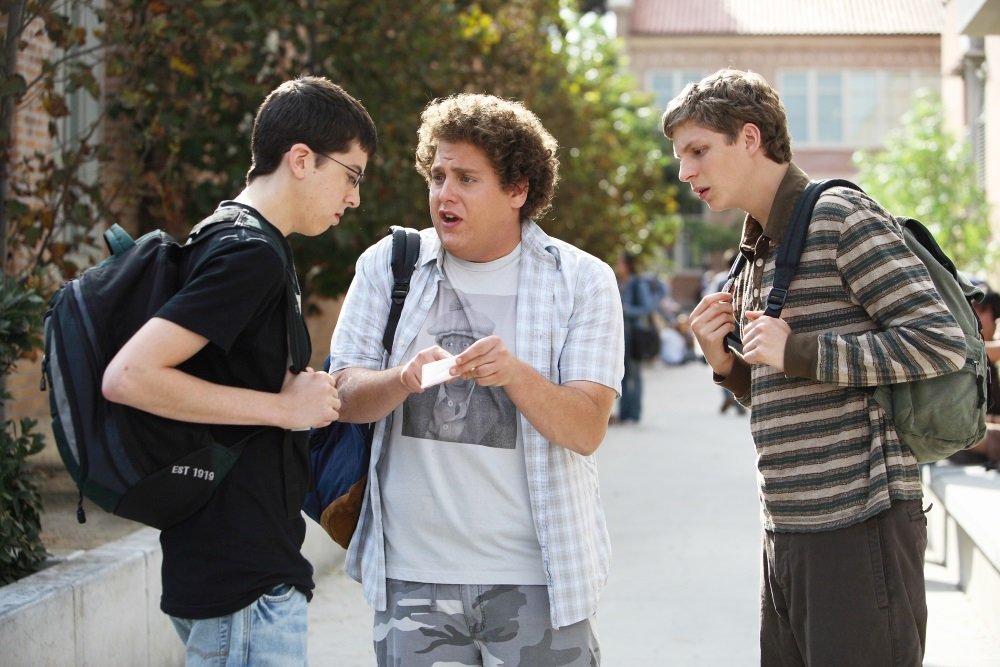 The raucous and raunchy comedy Superbad (2007) is the love child of American Pie and Dazed and Confused. Behind its floridly foul streams of profanity and adolescent preoccupation with sex and alcohol is a savvy evocation of teenage insecurity and the confused ideas and feelings about the opposite sex. It’s produced by Judd Apatow and directed by Greg Mottola, but more to the point, it is the debut feature from future comedy screenwriting superteam Seth Rogen and Evan Goldberg. It’s their sensibility that defines the film. They even give the main characters their own names.

The day-in-the-life adventure sends high school seniors and lifelong best buddies Seth (Jonah Hill) and Evan (Michael Cera), misfits on the bottom of the high school pecking order, on a quest for booze to impress the girls of their dreams. Their farce of an odyssey encompasses the ludicrous fake I.D. (“I am McLovin!”) of their even geekier third wheel Fogell (Christopher Mintz-Plasse, impressively comfortable in his spazzness) and a pair of staggeringly gullible cops (Bill Hader and screenwriter Rogen) who turn out to be grown-up geeks with guns. But underneath the precarious adventures in grownup-land is an undercurrent of frustration, panic, betrayal, and issues of self-image, all hormonally heightened and intensified by the separation anxiety of impending graduation.

Cera is an older version of his Arrested Development persona, a little more confident with his friends but certainly as shy and uncertain in the social world. Hill’s porn-obsessed Seth, who spouts profanity with a hardy flamboyance and hilarious uninhibited overkill, feels betrayed that timorous, nervous Evan is going Ivy League while he’s headed for a state school. This buddy comedy doesn’t shy away from the tensions and frustrations of personality clashes.

You don’t have to be a teenager to appreciate the raunchy humor, though it probably helps to be a guy. And it is another production infatuated with the seventies, from the strobing colors and geeky shadow dancing of the opening credits through the unabashedly, unapologetically hilarious uninhibited overkill of Seth’s porn-obsessed streams of profanity (the primary reason for the film’s R rating). But everyone should feel a twinge of recognition when the boys realize that, vows of loyalty and friendship aside, their lives are headed in different directions, and that it’s okay.

Available on Blu-ray and DVD in R and unrated versions (the latter with four additional minutes of footage). The commentary with director Greg Mottola, producer Judd Apatow (accompanied by his pre-teen daughter), writer/actor/exec producer Seth Rogen, co-writer Evan Goldberg, and actors Jonah Hill, Michael Cera, and Christopher Mintz-Plasse, is amiably raucous and then descends into amiable raunchiness. Among the supplements are 12 minutes of deleted and extended scenes, the 30-minute squad car improv featurette “Cop Car Confessions” with Seth Rogen, Bill Hader, and a series of back-seat guest stars, and video footage of table reads from 2002 (with Seth Rogen reading the role of “Seth”) and 2006. Exclusive to the unrated two-disc editions are menus featuring Seth’s phallic doodles, “The Music of Superbad” featurette with Bootsie Collins and his fellow funksters, 17 minutes of on-set video diaries, audition footage, an unbilled cameo by director Edgar Wright (Shaun of the Dead) as a blithely clueless interviewer in “Press Junket Meltdown,” and more.