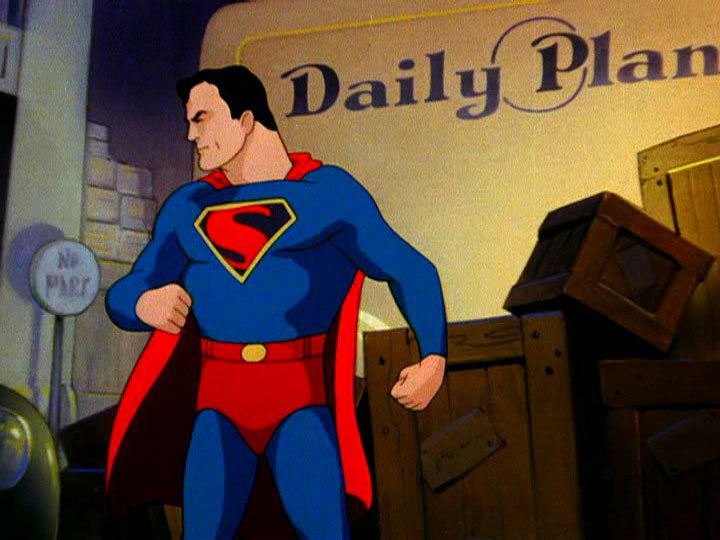 The Complete Superman Collection (1941-1943) – “Faster than a speeding bullet, more powerful than a locomotive, able to leap tall buildings in a single bound. The infant of Krypton is now the Man of Steel: Superman!”

The 17 animated shorts produced by Max Fleischer between 1941 and 1943 were the first big screen incarnation of the great comic book superhero and Superman never looked more beautiful in flight or heroic in action than in these cartoon classics. Max tends to get the creative credit for the shorts but it was his brother, Dave Fleischer, who directed the first eight shorts and created the handsome, graceful texture and theatrical sensibility of the series. The colors are soft and subtle in some scenes, rich and vivid in others, and are filled with dramatic washes of shadows throughout.

The stories evoke the wild tales of the adventure serials and the genre films of the time (The Mummy Strikes is very much a superhero take on the Universal mummy movies). But visually they are more like superhero noir pieces, more suggestive of the dark mood of Batman than the squeaky clean “man of steel” image we’ve come to expect, and the anthem-ic theme and dynamic scores by Sammy Timberg are fabulous, moody and suggestive when called for and rousing when the action kicks into gear. They are brilliant adventure cinema soundtracks, which gets to the heart of the genius of the series: these cartoons are more like the live action films of the era than the cartoons of the time.

The animated short series up to this time were comedies and caricatures. The Fleischer Bros. had to create a style that reflected the real world and human figures and they came with a stylized vision of urban America painted directly onto the screen in smooth strokes and evocative visuals, into which marvelous monsters and a mythic hero appear to do battle. The human figures are somewhere between Disney’s Snow White and the Seven Dwarfs and the “Superman” comic books and move with a grace unseen in the comic cartoon shorts of the time. The Fleischers alos gave Superman flight, according to animation historian Jerry Beck. Even in the comics he was still leaping tall buildings in a single bound, but the big screen demanded something more impressive, more heroic, more magnificent. They asked DC comics to let them give Superman flight and DC agreed. The rest is history.

These cartoons are also a product of their times and feature insensitive and sometimes offensive racial caricatures of the era, especially in the nationalistic war cartoons.

These are comic books for big kids, combining giddy stunts and last minute rescues with creepy horrors and deadly killers. With a real live villain bent on world domination out there during World War II, these fantasies hit closer to home than we might realize.

This collection presents high quality versions of all 17 animated shorts, which can be viewed straight through or on an individual basis.

The Warner Bros. restorations of the cartoons are also on SVOD through Amazon Video

as well as on DVD.
Superman: The Fleischer Cartoons: The Complete Series [DVD]

These animated shorts have been available on DVD in numerous collections over the years but the versions in the Warner Bros.’s Max Fleischer’s Superman offers the “authorized edition” from the original masters. Some of the shorts show surface scuffs and scratches but the colors are strong and the image quality sharp and clear.

All 17 theatrical cartoons are collected in a two-disc set along with two original featurettes. “The Man, The Myth, Superman” features scholars reflecting on the cultural need for heroes and the origins of the superman myths (like Hercules) and is completely unnecessary. More interesting is “First Flight: The Fleischer Superman Series,” a retrospective appreciation of the origins, history and aesthetics of the Fleischer shorts by comic book historians and contemporary animators. What’s missing is a program guide of some sort; there is no listing of the titles anywhere in the package except on the DVD menus.

There is also a Blu-ray release from Gaiam but those presentations are from PD elements and aren’t necessarily complete, and they are all “branded” with a label logo in the bottom left corner. The HD does not offer any improvement in visual quality and many cartoons are worse so it is no upgrade from the superb Warner DVD.