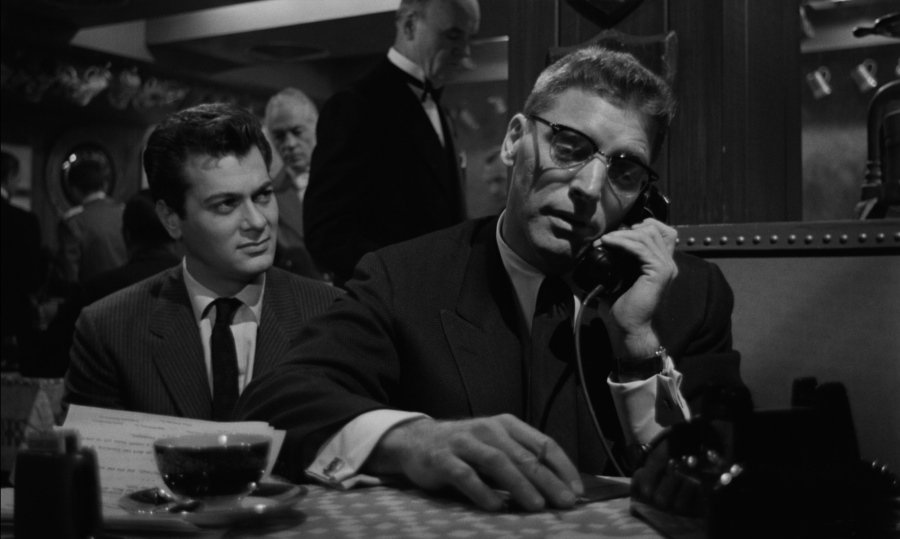 “I love this dirty town.” The first and only time that Burt Lancaster’s J.J. Hunsecker drops the cynical twist from his clenched smile and allows genuine appreciation cross his face in Sweet Smell of Success (1957) is when he drops that line while strolling down the nighttime streets of Broadway. It’s not a proclamation or even necessarily a compliment. He loves this town because he rules it from his tower of newsprint and television, making and breaking careers with a line and starving enemies into submission by conspicuous neglect.

Sweet Smell of Success is one of the most lacerating and vicious visions of the predatory urban world in the American cinema, and one accomplished without a single murder, gunshot or pulled knife. This is Broadway Noir, the dark side of the intersection of show business, politics and social register in the era when newspaper columnists and television personalities held sway over a nation and not just a slice of the demographic.

Hunsecker is a classier, more cultivated version of Walter Winchell for late-fifties Broadway culture and Lancaster is smooth, silky and subtle, controlled and controlling in social situations, using silence and the threat of his voice behind the words as weapons in the power struggle of conversations. There’s not an exchange where J.J. fails to remind his listener what he has on them, and what they owe him.

While Lancaster’s Hunsecker dominates the film like a despot on a throne of ink and newsprint, the story is all about Sidney Falco (Tony Curtis), a desperately ambitious press agent, a hustler dodging clients he hasn’t come through for, a wise-guy pitching items and planting scandal, a street kid dancing in the margins of the big-time, and a pretty face with a tarnished twinkle and a pose of class and savvy that crumples whenever he bites his nail in panic. And he’s a doormat for J.J. and the great one is wiping his feet on Falco with a vengeance until he does Hunsecker’s dirty little jobs.

Not simply the best performance Curtis has given (and the film for which he is most proud), he delivers a masterpiece of American film acting. Curtis’ Sidney Falco never rests. His eyes are always scanning, checking the place out for opportunities. When he’s not walking (and walking is not the right word; he paces, strides, bounces, sidles, dances and darts) he’s a jittery coil of nerves firing in all directions. He’s come to terms with the fact that he’s a heel, which makes it easier to let his last moral boundaries crumple when the right bait is waved in front of him.

It’s written by Clifford Odets and Ernest Lehman and there isn’t a 60-second stretch without a piece of dialogue so sharp it could cut you (and in some cases it does, leaving victims bleeding its wake): “You’re dead, son. You’re just not buried.” “The cat’s in the bag and the bag’s in the river.” “I’d hate to take a bite out of you. You’re a cookie full of arsenic.” “My right hand hasn’t seen my left hand in years.” And director Alexander Mackendrick and cinematographer James Wong Howe make the film come alive with a jittery, electric energy by shooting the exteriors on the streets of Broadway at night. Their camera is rarely still, propelled by Falco’s restless energy and the busy nightlife of this dirty town of exclusive nightclubs and entertainment joints interspersed with pawn shops: the palaces of dreams and the final resting place of the treasures from everyone who failed to make their dreams come true. Sidney is perpetually dancing between these two extremes until he’s run out of dance partners and the music ends.

Susan Harrison, Martin Milner, and Sam Levene co-star and The Chico Hamilton Quintet appears as themselves.

It was added to the National Film Registry in 1993

Not rated, black and white

, iTunes, GooglePlay and/or other services. Availability may vary by service.
Sweet Smell of Success (The Criterion Collection) [Blu-ray]

It’s available on DVD in a no-frills edition and on special edition Criterion DVD and Blu-ray in a digital restoration (the image is etched into the night). Criterion’s superior edition features commentary by film scholar James Naremore and two new interviews conducted for this release: “James Mangold on Mackendrick,” a 25-minute piece with Mangold talking about his CalArts teacher and mentor, and the 29-minute “Gabler on Winchell” with Walter Winchell biographer Neal Gabler discussing the real-life inspiration for the character of J.J. Hunsecker. The archival offerings are “Mackendrick: The Man Who Walked Away,” a 1986 TV documentary on the filmmaker turned educator (featuring interviews with Burt Lancaster and James Coburn, among others), and the 1973 documentary short “James Wong Howe: Cinematographer.” The booklet features a new essay by critic Gary Giddins plus two short stories by Ernest Lehman that introduced the characters from the film, notes about the film by Lehman, and an excerpt from Mackendrick’s book “On Film-making.” Packaged in a paperboard clamshell in a slipsleeve.