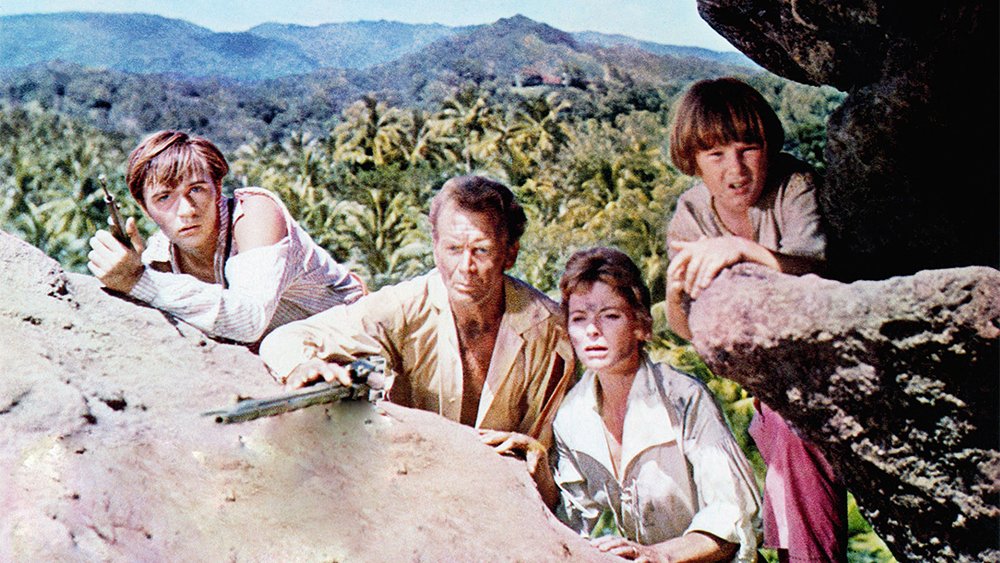 The Disney touch is all over Swiss Family Robinson (1960), a grand, colorful version of the Johann Wyss adventure of a European family set off for the new world of New Guinea.

The film opens on a ship tossed and torn by a raging storm while a family struggles to make it through alive. Tossed into a reef near a deserted tropical island, father John Mills takes charge and the family soon turns their island prison into a veritable paradise. Their multi-level treehouse, built in record time, is complete with running water and a working pipe organ scavenged from the ship, while their grand yard is abloom in English roses.

As a tale of hardship and pioneer pluck, the tale is pure fantasy, but as entertainment it’s energetic and appealing. The island is impossibly populated by ostriches, zebras, lions, and elephants, a private zoo that delights the youngest boy and offers plenty of comic relief. The two older brothers (James MacArthur and Tommy Kirk) discover even wilder life when they rescue the prisoner from South Seas pirates (led by hard bitten Sessue Hayakawa).  Be warned: there are some unfortunate racial stereotypes here.

There’s little real danger anywhere in the film. Even the climactic battle with the pirates is a cartoonish affair with coconut bombs and non-lethal booby traps until the final desperate, deadly moments. But all the Macgyver-ing of devices out of jungle materials is part of the fun.

So, yeah, it’s hardly a faithful adaptation of the novel. But it is a lush, beautifully photographed film and an entertaining adventure safe for all ages.

Also on DVD and on SVOD through Amazon Video, iTunes, GooglePlay, Vudu and/or other services. Availability may vary by service.
The Swiss Family Robinson [DVD]