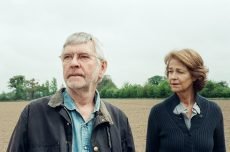 45 Years (2015) (Criterion, Blu-ray, DVD), starring Charlotte Rampling and Tom Courtenay as a happily married couple suddenly jolted when the distant past of the devoted husband suddenly resurfaces, earned both stars the Silver Bear for acting at the Berlin Film Festival and Rampling the first Oscar nomination of her 50-year career. They are superb […]