Finding Dory (2016), Pixar’s sequel to its gorgeous animated aquatic masterpiece, can’t shake off its sequel-ness—it plays like a variation on the theme rather than an original take on the familiar tale—but it’s a Pixar picture with all the care and love and storytelling magic that the studio brings to every project. Which makes this […]

In Love and Death (1975), Woody Allen spoofs epic Russian literature, Chekov plays, and Bergman movies with a mix of philosophical vaudeville and Borscht Belt one-liners and sight gags. It was his sixth feature as a director and his third screen appearance with Diane Keaton, who gets as many punchlines as Allen does, and often […] 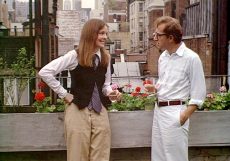 After a series of successful comedies that combined spoof, farce, and satire, Woody Allen took everyone by surprise with Annie Hall (1977), his first personal film and his most sophisticated to date. It drew from the same sources of humor as his earlier comedies, with interludes of memories seen through the lens of a comedian’s […]