Bill Morrison’s films straddle film history and avant-garde expressionism, mining the wealth of silent film history and exploring the abstract beauty of decaying nitrate film, a particularly volatile medium that breaks down over time. Dawson City: Frozen Time (2016) celebrates the “Dawson Film Find” of 1978, thousands of reels of film buried in the permafrost, […] 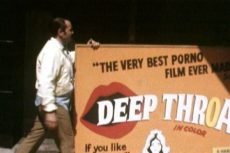 With its party rock soundtrack, colorful (and at times damaged) characters, and portrait of the pornography industry on the cusp of a cultural shift, Inside Deep Throat (2005) is something of a real life Boogie Nights. Documentary directors Fenton Bailey and Randy Barbato offer the story of a grubby historical event: an explicit but otherwise […]

Sidney Lumet was one of the great American filmmakers. He earned his first of four best director Oscar nominations for his feature debut, 12 Angry Men (1957), and directed such American classics as The Pawnbroker (1964), Serpico (1973), Dog Day Afternoon (1975), and Network (1976) in a career that spanned more than 50 years of […]

Winnebago Man (2009) – Jack Rebney may not be a household name, but to a small, fervent following he’s a cultural icon, known as “The Angriest Man in the World” or simply “Winnebago Man.” His unique fame is the result of the original viral video, a montage of invective-laced outtakes from a Winnebago sales video […]

In conjunction with the premiere of the original documentary Five Came Back, the story of how Hollywood’s great filmmakers went to war as filmmakers for the armed service in World War II, Netflix has made a number of the documentaries featured in the production available on Netflix. Here’s a guide to some of the highlights. […]