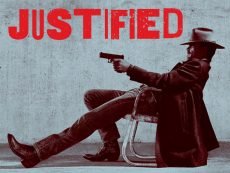 Justified: Complete Series (2010-2015) – Timothy Olyphant is U.S. Marshall Raylan Givens, a cowboy of a lawman whose brand as cowboy justice gets him demoted from his Miami posting and sent back to Kentucky, the home he thought he’d escaped once and for all. His new boss (Nick Searcy, a sharp leader with a laid-back […]

Jackie Brown (1997) – “Amateurs borrow, professionals steal,” goes the maxim, and Quentin Tarantino steals like a pro. Where directors of the previous generation peppered their films with classic cinematic quotes, Tarantino plunders the films of his formative years for ideas—mostly B-movies and exploitation films about cars and capers and criminals—and riffs on them with […]

Quentin Tarantino’s challenge with Jackie Brown (1997) was how make someone else’s story—Elmore Leonard’s Rum Punch, to be specific—his own. His solution: set it in his own reference riddled world. From the film’s opening shot—a quote from The Graduate overlaid with early seventies movie lettering and set to a Motown tune—we know we’re in Tarantino […]

Justified, based on a short story by Elmore Leonard and developed by Graham Yost (in collaboration with Leonard) into a riveting rural crime drama, was one of the best shows on TV for its six-season run on FX, thanks to the way it preserves Leonard’s distinctive pulp fiction sensibility. The sixth and final season is […]

Hombre (1967), adapted from the novel by Elmore Leonard, plays as a ruthless, revisionist take on Stagecoach. Paul Newman is the blue eyed “savage,” a white man raised by the Indians who rejects so-called civilized society for his spiritual family, who has chosen to go native rather than live in the lies and corruption of […]