“I’m a rat, which makes life hard.” That’s an understatement. In Ratatouille (2007), the dynamic animated film from writer/director Brad Bird (The Iron Giant and The Incredibles) and Pixar Studios, Remy (voiced by Patton Oswalt) may be a rat but he’s also a budding gourmand. Where his family is content to raid trash cans and scarf […] 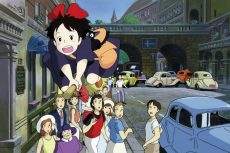 Kiki’s Delivery Service (Japan, 1989) carries us into the experiences of a young witch as she charts her path in the real world. Sincere, spirited Kiki has turned thirteen, the age when witches leave the nest for a year of solo training. She’s ready to take on the world with her broomstick and her best […]

An animated robot love story with an environmental theme and a slapstick delivery, WALL•E (2008) is a charmer of a film and a delightful piece of storytelling. Directed by Andrew Stanton (Finding Nemo) with the animation wizards at Pixar, it takes on the challenge of delivering an animated feature that is predominantly wordless (and even […]

Pixar auteur John Lasseter gave new life to animated cinema with his CGI revolution but he never forgot the old-school art of hand drawn animation that made Disney’s reputation and he courted John Musker and Ron Clements to make the studio’s first new “princess” film since their own The Little Mermaid and Aladdin. The Princess […]