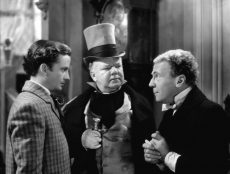 Charles Dickens’ sprawling, semi-autobiographical novel gets squeezed into a vivid (if episodic) 130-minute Hollywood feature in the handsome MGM production David Copperfield (1935). Produced by David O. Selznick, MGM’s resident producer of class and literature, and directed by George Cukor, the film follows the life of David from birth and boyhood (played by thirties child […]

What Price Hollywood? (1932) is one of the wittiest and most interesting Hollywood movies about Hollywood culture ever made. It’s a shame it’s not better known. This pre-code comedy stars Constance Bennett as an aspiring actress waiting tables at The Brown Derby who gets her big break when a drunken film director (Lowell Sherman) invites […]

Set in 1947 India, after World War II and in the early days of the independence movement, Bhowani Junction (1956) is a Hollywood drama with an old-fashioned sense of storytelling and a modern (for the time) approach to colonialism, bigotry and identity. Ava Gardner stars as the Anglo-Indian woman looking for her own identity in […]

Gone with the Wind (1939), one of the most beloved and revered of American classics, showcases the best and worst of old Hollywood. You can’t miss the idealization of antebellum South, presented as some sort of proud aristocracy blinded by arrogance and yet elevated to a kind of American Camelot served by complacent slaves, or […]