Despite the title Mario Bava’s funky 1965 sci-fantasy thriller Planet of the Vampires (Italy, 1965), there are no bloodsuckers to be seen, merely an unseen force that kills the astronauts (led by a craggy Barry Sullivan) that land on a primeval otherworldly planet of jagged rocks, bubbling lakes of lava mud, and purple skies. If […]

A spaghetti western with French seasonings, Cemetery Without Crosses (1969) is a Franco-Italian co-production shot in Almeria, Spain, the definitive badlands landscape of the Euro-western. The director, screenwriters, two stars, and even composer are French and the supporting cast largely Italian. And while this is not shot in the widescreen dimension of CinemaScope, de rigueur […] 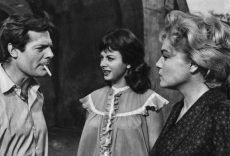 Adua and Her Friends (Italy, 1960) are prostitutes from a Rome brothel attempting to take charge of their own lives after their place is shut down in the aftermath of Italy’s Merlin Law, which ended legalized prostitution in 1958. Adua (Simone Signoret), a veteran of the life, has a plan to open a restaurant as […]

Enchanted April (1991) – Josie Lawrence and Miranda Richardson are the two quietly miserable middle class wives who impulsively (and passionately) decide to escape their dreary world in post-World War I London and their distracted, pompous husbands and rent a castle on the Italian coast. When they wake up in their villa after a rainy […]

The Italian Connection (Italy, 1972), from Italy’s king of crime cinema Fernando di Leo, stars Mario Adani (the top dog thug of the Americano’s gang in di Leo’s earlier Caliber 9) as Luca, a remarkably affable and well-liked pimp whose popularity on the street makes the Milan boss nervous. So he frames Luca for a […] 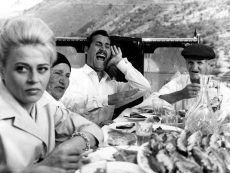 Mafioso (Italy, 1962), Alberto Lattuada’s brilliant satire of Sicily’s “paternal” mafia, became the cinematic rediscovery of 2006 when it was revived and shown at the New York Film Festival. Alberto Sordi plays the Sicilian son made good, a business professional in Milan who, bubbling over with sentimental zeal, brings his Milanese wife and two adorable […]

The shamelessly and fabulously derivative Italian space opera Starcrash (1979) is both the most ridiculous and the most irresistible of all the Star Wars knock-offs of the late seventies and eighties. Caroline Munro spends much of the film in a black latex bikini as the great outlaw starship pilot Stella Star, who is arrested by […]

Deep Red (Profundo Rosso, Italy, 1975), Dario Argento’s fifth film and his fourth giallo (his non-horror interim film Le Cinque giornate remains unreleased in the U.S.), stars David Hemmings as an American jazz pianist and music teacher in Italy. He witnesses a bloody murder in an apartment window and rushes up from the street to […]