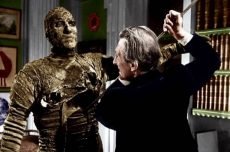 Hammer Films’ greatest nemeses, Peter Cushing and Christopher Lee, once again square off in The Mummy (1959), the studio’s reworking of Universal’s The Mummy (with elements of The Mummy’s Tomb and The Mummy’s Ghost thrown in for good measure). Cushing stars as archaeologist John Banning, whose dig for a lost tomb results in untold treasures […]

After Hammer’s tremendous success with The Curse of Frankenstein, they struck a deal to adapt Universal studio’s catalogue of classics. The Horror of Dracula (1958) was their first follow-up. Christopher Lee removes the monstrous make-up from the earlier film and makes his entrance as an elegant, confident, altogether seductive Dracula, a frightening figure of flashing […]

Britain’s Hammer Studios had been making films for decades before they suddenly redefined themselves with this lurid remake of the Universal Studios horror classic. Prohibited by Universal from copying their blocky make-up (and their script for that matter), Hammer returned to Mary Shelley’s novel for inspiration for The Curse of Frankenstein (1957)… and then went […]