The first real solo flight by young filmmaker John Carpenter, Assault on Precinct 13 (1976) is the film where he announced his influences, found his strengths, and began to develop his style. It’s is a siege picture, a cross between a Howard Hawks western and a horror film that meets in a desolate Los Angeles […] 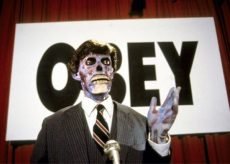 A year after Oliver Stone elevated the phrase “Greed is good” to a satirical double-edged mantra in Wall Street, John Carpenter put it more bluntly in They Live (1988), a scruffy little genre movie with a subversive subtext. “Why do we worship greed?” asks an pirate broadcaster in the opening scenes, as images of homeless […]

Escape from New York (1981) – “Plissken? I heard you were dead.” “Call me Snake.” Maybe it’s not John Carpenter’s best film, but it’s one of his most fun and the premise is irresistible: in the future, Manhattan has been turned into a high security island prison and Liberty Island is the guard station. When […]