The Fate of the Furious, the seventh film in the seemingly exhaustible Fast and Furious franchise, pits Vin Diesel and Charlize Theron against Dwayne Johnson and the rest of his crew. It leads off the new films coming to cable and streaming video-on-demand in July along with the jungle fever prequel Kong: Skull Island with Tom […] 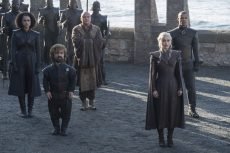 It may be summer outside but winter is here on HBO as Game of Thrones returns. The seventh season of HBO’s most popular series debuts in July, along with new seasons of the HBO originals Insecure with Issa Ray and Ballers with Dwayne Johnson. HBO also debuts the four-part original documentary The Defiant Ones about […]

Asghar Farhadi’s The Salesman, which won the Oscar for Foreign Language feature, arrives on Amazon Prime in July (delayed from its originally-scheduled June release), along with Miss Sloane starring Jessica Chastain and the John le Carré adaptation Our Kind of Traitor with Ewan McGregor and Naomie Harris. Also coming in July: David Fincher’s Oscar-winning The […]

Netflix goes to a galaxy far, far away with Rogue One: A Star Wars Story, which debuts in July along with the Oscar-nominated Lion with Dev Patell and Nicole Kidman and the new Netflix original series Friends From College with Keegan-Michael Key and Cobie Smulders and Ozark with Jason Batemen. Netflix continues its run of […]

Ewan McGregor and Naomie Harris are civilians dropped into the center of international intrigue in the John le Carré adaptation Our Kind of Traitor, which makes its streaming debut on Hulu in July. Also debuting on Hulu are Spike Lee’s Da Sweet Blood of Jesus, his remake of the cult vampire film Ganja and Hess, […]