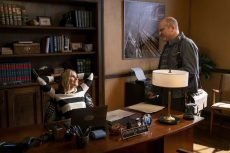 Veronica Mars launched in 2004 as a youth-skewing high school version of the American detective drama: Nancy Drew meets Raymond Chandler in a beachside suburb of big city noir. It ran for three seasons, followed by a disappointing 2014 Kickstarter-funded feature film—but neither creator Rob Thomas nor the fans were ready to let go of the […]

Wet Hot American Summer (2001) has lived longer than anyone would have predicted while watching it in 2001. The self-aware summer camp spoof/nostalgia lampoon spawned a prequel and a sequel series for Netflix that play out in the same cheeky, silly, self-aware manner of adult actors playing at being teenagers. It feels as much an […]